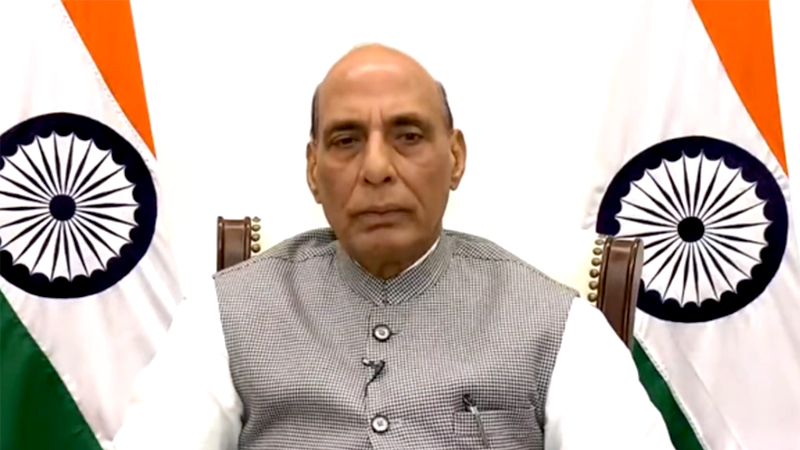 Raksha Mantri Shri Rajnath Singh visited the Bhanur Unit of Bharat Dynamics Limited (BDL) in Telangana on July 02, 2022 and dedicated to the Nation a number of new manufacturing facilities set up by the Defence Public Sector Undertaking (DPSU). These include a Warhead facility at the Bhanur Unit and a Radio Frequency (RF) Seeker facility at Kanchanbagh Unit.

Addressing the researchers, engineers, technicians and other personnel of BDL, the Raksha Mantri termed the inauguration of the manufacturing facilities as a testament to the commitment of the DPSU towards strengthening the defence sector and realising Prime Minister Shri Narendra Modi’s vision of ‘Aatmanirbhar Bharat’. He also lauded BDL for adopting a positive approach towards self-reliance by manufacturing products indigenously in collaboration with foreign companies, in line with ‘Make in India, Make for the World’ vision. He congratulated the company for preparing an indigenisation plan for the next five years and successfully achieving the target of the first two years.

The RF Seeker Facility, which was virtually inaugurated by the Raksha Mantri, is an integrated Centre for production & testing of RF seekers. Seeker is a critical and technology intensive subsystem which will be used in all future missiles for target tracking. This facility has been established by BDL with an investment of Rs 50 crore. Shri Rajnath Singh congratulated BDL for joining the elite club of select few companies across the globe to have the capability to produce the seekers. He hoped that the facility will play a big role in achieving ‘Aatmanirbharta’ in the field of missile production.

Shri Rajnath Singh exuded confidence that the Warhead facility will diversify the scope of manufacturing futuristic warheads and help in making India self-reliant in this field. With the inauguration of this facility, BDL has taken one more step towards self-reliance as the facility will be used for both its current as well as futuristic missiles.

Sharing his thoughts on the constantly-evolving nature of technology and its growing importance in warfare in changing times, the Raksha Mantri stressed on the need to remain up-to-date on the technological front with indigenous capabilities. He exhorted all defence equipment stakeholders – Armed Forces, scientists, academicians and industry – to develop products/systems while adapting to the ever-evolving situation. He emphasised on strengthening technology forecasting and investing in cutting edge manufacturing & testing capabilities, adding that the inauguration of RF Seeker Facility and Warhead Facility is a right step in that direction.

The Raksha Mantri underlined the importance of developing a long-term partnership between defence manufacturing organisations & academic institutions, moving from ‘Know-how’ to ‘Know-why’. He said, this long-term collaboration will help academia to work on core technological problems and assist R&D institutions to move from ‘theoretical analysis’ to ‘conversion into actual products’. It will be a win-win situation and give a boost to the defence eco-system of the country, he added.

Shri Rajnath Singh commended BDL for working on R&D of third generation anti-tank guided missile, Amogha. He added that the DPSU has been an important part of Integrated Guided Missile Development Programme started under Missile Man of India & former President Dr APJ Abdul Kalam in the 1980s. “The programme reduced our dependence on foreign countries in the field of missile development and sowed the seeds of self-reliance. Dr Kalam once said ‘In this world, fear has no place. Only strength respects strength’. BDL is working with dedication and hard work towards making Dr Kalam’s dreams come true,” he said.

The Raksha Mantri appreciated the vital role being played by BDL in catering to the needs of the Armed Forces, terming its achievements as a proof that the military will continue to induct indigenous systems regularly. He added that various items of BDL find place in the recently-issued three positive indigenisation lists, which will enhance the company’s capabilities besides ensuring faster delivery.

Voicing the Government’s unwavering commitment to overcome obstacles and bring transformative reforms in the defence sector, Shri Rajnath Singh asserted that “making the Armed Forces agile, fit, modern and a world class defence service is our top priority”. He described the AGNIPATH scheme as a revolutionary reform which is in the interest of the country, Armed Forces and the youth. “We studied the defence systems of many countries and finalised our plan by aligning these findings with our ground realities. Indian Air Force has received a large number of applications under the AGNIPATH scheme. Similar response is expected in the other Services as well. Our youth should come forward and take advantage of this golden opportunity to serve the country,” he said.

The Raksha Mantri also spoke of some other reforms such as creation of the post of Chief of Defence Staff, establishment of Department of Military Affairs, increasing private sector participation in defence production and launch of Innovations for Defence Excellence (iDEX) initiative. He urged all stakeholders to enhance their preparedness, invest more in R&D and expand by exploring the international market. He extended all support of Ministry of Defence to BDL in this endeavor.

On the occasion, a Central Storage facility at Visakhapatnam Unit of BDL was also virtually inaugurated by Shri Rajnath Singh. The state-of-the-art facility is equipped with modern storage system consisting of vertical Carousel System, Mechanical Compactor and Motorised Compactor which can cater the entire storage needs of the Unit. The facility has been constructed with an investment of Rs 4.90 crore.

The Raksha Mantri also virtually inaugurated infrastructure facilities (Multipurpose Community Hall, Gymnasium, Science Laboratories at Govt Junior College, nine additional class rooms at Zilla Parishad School, two additional class rooms at elementary school) constructed by BDL in Military Madhavaram village, West Godavari District as part of its Corporate Social Responsibility initiatives. Madhavaram village, which is located near Tedepaligudem, is popularly known as ‘Military Madhavaram’, as it has a large number of persons joining the Armed Forces. BDL, being a DPSU, has adopted this village as part of its CSR and constructed the infrastructure at a cost of Rs 4.5 crore.

A statue of Father of the Nation Mahatma Gandhi was also unveiled by Shri Rajnath Singh at the BDL premises. CMD, BDL Commodore Siddharth Mishra (Retd) and senior civil & military officials of Ministry of Defence were among those present on the occasion.