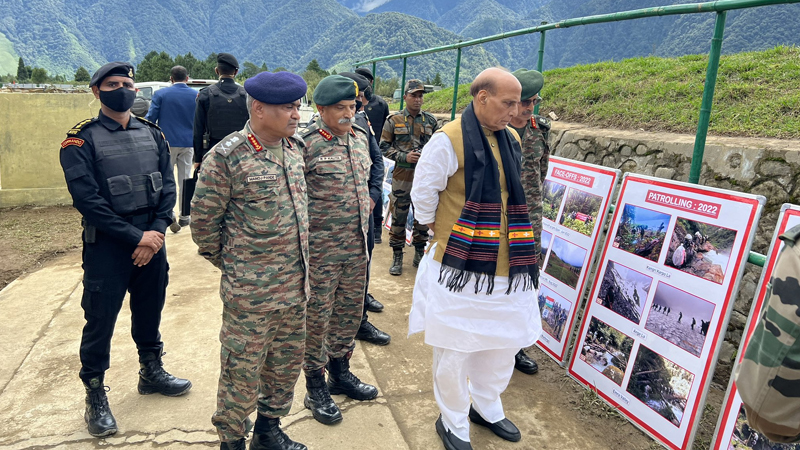 Raksha Mantri Shri Rajnath Singh visited the forward areas of 3 Corps in Anini, a village in Dibang valley of Arunachal Pradesh on September 29, 2022. He made an on-the-ground assessment of the country’s defence preparedness along the LAC by taking stock of the entire gamut of security-related aspects. Chief of the Army Staff General Manoj Pande, General Officer Commanding-in-Chief, Eastern Command Lieutenant General RP Kalita and other senior officers of the Indian Army accompanied the Raksha Mantri who also interacted with the troops posted in the area.

After his visit to the forward areas, the Raksha Mantri held an interaction with Armed Forces personnel in Tezpur, Assam. In his address, he commended the dedication and sacrifice of the soldiers posted at the borders, bravely protecting the sovereignty, unity and integrity of the country.

Shri Rajnath Singh termed the Armed Forces as the very reason behind the strength and confidence of the Nation. He said, strengthening India’s military prowess has been the Government’s top priority ever since it came to power since 2014, with focus on equipping the Services with state-of-the-art weapons/equipment through an ‘Aatmanirbhar’ defence industry.

The Raksha Mantri appreciated the fact that the Government’s efforts have resulted in making a strong military which is fully capable of protecting the Nation from all kinds of threats. He lauded the Armed Forces for instilling a sense of national pride and patriotism among the people, especially the youth, by displaying their strength and courage from time to time.

Shri Rajnath Singh pointed out that India’s international image has completely been transformed due to the bold decisions taken by Prime Minister Shri Narendra Modi as well as the gallant deeds of the Armed Forces. “There was a time when India wasn’t taken seriously on international platforms. Due to the efforts of our Prime Minister, today we have become an assertor from a mere observer. Indian military is respected all over the globe. Our friendly foreign countries have trust in them. It is one of the major reasons India has emerged as a powerful nation. Today, we are the fifth largest economy in the world, strongly moving forward,” he said.

As part of the day’s engagements, the Raksha Mantri also interacted with the members of second religious expedition to Athu Popu, an annual trek of local Idu Mishmi tribe which is being facilitated by Indian Army since 2021 as part of outreach and continued efforts towards supporting the locals & development of tourism.