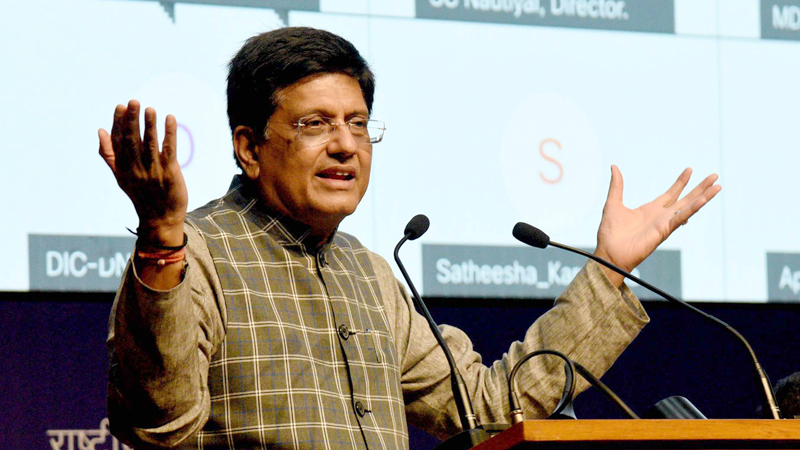 The Minister of Commerce and Industry, Consumer Affairs, Food and Public Distribution and Textiles, Shri Piyush Goyal today said that the inputs given by Logistics Ease Across Different States Report 2021 can lead the way to bring down logistics cost by 5% over the next 5 years.

He was addressing the gathering after the release of the LEADS Report in New Delhi today.

Shri Piyush Goyal said that India is committed to build modern infrastructure for the 21st century, at a pace never seen before.

Referring to the recently launched PM GatiShakti Master Plan ,he said that it would revolutionise the next generation of multimodal infrastructure development in the country.

Lauding Prime Minister Shri Narendra Modi’s consistent focus on infrastructure, the Minister said that the initiatives taken by him in Gujarat for 13 years had laid the foundation for Gujarat to consistently stay at the top of the chart in LEADS report

Shri Goyal emphasized that efficient logistics was pivotal to bring ease and empowerment to businesses as well as citizens. He observed that logistics contributed immensely in our fight against COVID-19 by taking essential supplies including liquid Medical Oxygen throughout the country during the 2nd wave

Observing that logistics is an enabler of multiple visions- From Make in India for the World to Last Mile Delivery, the Minister said that to achieve ambitious targets we cannot afford to walk but we need expressways of Land, Air & Water.

He named Infrastructure, Quality Services & Conducive Regulatory Framework as the three pillars of Resilient logistics. He added that with Competitive & Cooperative federalism, LEADS is creating an Ecosystem for Excellence by bringing in a healthy competitive spirit where everyone is persuaded to improve.

“Rather than just absolute improvement in one State, improvement of logistics across all States, will be a force multiplier for the entire logistics ecosystem”, he said.

He lauded Gujarat, Haryana & Punjab for having acquired the top 3 positions respectively.

He applauded the actions taken by Gujarat Govt against LEADS 2019 recommendations such as the widening of roads, implementation of faceless services in license renewals, expansion of warehousing etc.

He also congratulated the State of Uttar Pradesh for leapfrogging 7 ranks since 2019, highest among all states, driven by policy initiatives, higher infra

Shri Goyal said that since its inception in 2018, each year LEADS report has

followed a progressive methodology to provide a granular insight on the logistics performance at State/UTs level. “LEADS 2021 has gone 2-step ahead in analysis of domestic and EXIM logistics ecosystem of the state” he added.

The Minister said that states have Indispensable role in improving the logistics ecosystem of India. He outlined a number of suggestions for States including framing of State Logistics policy & Logistics Master Plan, use single-window clearance system for logistics establishment of grievance redressal mechanism and enabling if skilling in logistics through State skilling infrastructure

He opined that LEADS report would be a handy & practical guide to identify strengths, opportunities & improve the logistics performance of States.

The report ranks the states on the basis of their logistics ecosystem, highlights the key logistics related challenges faced by the stakeholders and includes suggestive recommendations.

The Ministry of Commerce and Industry (MoCI) had launched a study, “Logistics Ease Across Different States (LEADS)” in 2018 with the main objective of ranking States and UTs on the efficiency of their logistics ecosystem.

The first version of the report, LEADS 2018, focused on export-import trade and assessed the efficiency of the logistics ecosystem in each State and UT.

The second edition of the study – LEADS 2019, covered both international and domestic trade.

The LEADS 2021 exercise has gone one-step ahead in analysing domestic and EXIM logistics ecosystem of the state. Specifically, two improvements have been done in the overall assessment framework. Firstly, objective parameters have been used along with the perception-based indicators for index formulation.

The objective parameters in the LEADS 2021 Index have been introduced by way of an objective survey instrument administered to the States/UTs and by the inclusion of secondary datasets on logistics across the State/UT level. Secondly, the statistical methodologies to build the index has been updated to get more robust results, given change in the overall framework.

Alternatively, a total of 21 perception and objective variables have been statistically analysed to prepare a composite index basis upon which the states have been ranked.

The secondary dataset was compiled with the assistance of the central government ministries, department and associated agencies.

The LEADS survey 2021 was conducted over the period from May to August 2021 in a challenging environment when the COVID crisis was being fought across multiple fronts.

The whole exercise garnered 3771 responses from 1,405 respondents across the country. For representation purposes, states have been ranked in three separate classes including ‘North Eastern States & Himalayan UTs’ and ‘Other UTs’ group.

Gujarat, Haryana and Punjab have emerged as the top performers in the LEADS 2021 index respectively.

Proactive policies, well-developed infrastructure and services driven by a responsive Government have helped Gujarat to maintain its rank. Haryana has secured the second position, followed by Punjab.

Within the North Eastern States and Himalayan Region, Jammu and Kashmir is the top ranker followed by Sikkim and Meghalaya. Delhi stands at the top rank among Other UTs. Uttar Pradesh, Uttarakhand and Jharkhand have witnessed a remarkable improvement in their ranks compared to 2019 LEADS ranking and have emerged as the top improvers.

The report consists of specific section on States and UTs giving detailed analysis of their performance in the LEADS, including issues and challenges being faced by stakeholders as well as suggestions to mitigate the issues.

States/UTs are encouraged to examine and evaluate the findings of the report and to formulate a suitable strategy and a prioritized action plan for improving logistics performance.

LEADS is a continuous exercise, and the MoCI is enthused to provide a pivotal role in initiating, creating, and connecting all the stakeholders to bring in the required improvements in the logistics space collaboratively.

With the efforts in the right direction, it is hoped that the vision of logistics cost will be reduced by 5% in the next five years. This will ensure that the Logistics sector serves as an engine of growth and a key driver for transforming India into a five trillion-dollar economy.

Department of Commerce through LEADS will continuously engage with all States and UTs to support, facilitate and promote improvements in the overall logistics ecosystem. Synergies flowing from such a coordinated approach will reduce logistics costs and which, in turn, will act as significant stimulants to PM Gati Shakti National Master plan.