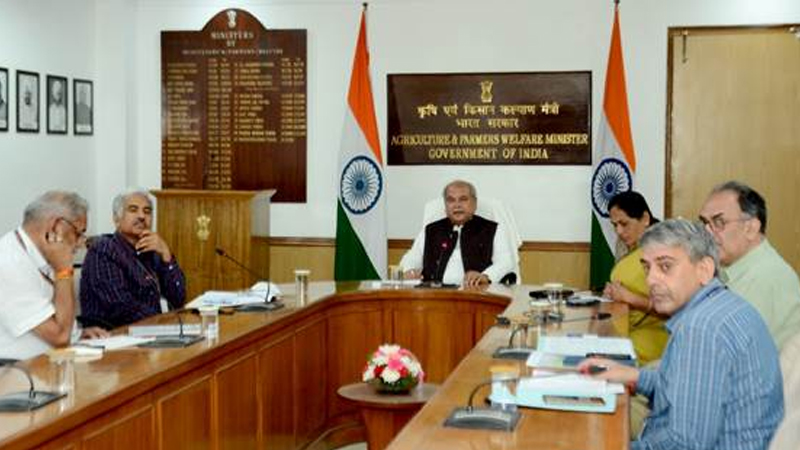 Union Minister of Agriculture and Farmers Welfare, Shri Narendra Singh Tomar presided over a national webinar on “Seed Chain Development” here today, being held as part of the year-long Azadi ka Amrit Mahotsav celebrations. Shri Tomar said the State Governments, in consultation with the Central Government, should prepare a roadmap for 10-15 years for the benefit of farmers. Shri Tomar said it should be ensured that the farmers get timely supply of good quality seeds. State governments should strictly curb black marketing and those selling fake seeds.

Shri Tomar said that we all know the importance of seeds. If the seed is good, then the produce will be good, whether it be individuals or the seeds for cultivation. Availability of good seeds for farming increases production and productivity, resulting in higher income for farmers and raising the share of agriculture in GDP besides benefitting our agriculture and the nation’s economy. Under the leadership of Prime Minister Shri Narendra Modi, the Union Government’s effort is that the bulwark of agriculture becomes the secure foundation of the country. Together we have to fulfil the remaining task. Shri Tomar said that the entire seed chain should be properly streamlined so that farmers do not face any problem. Besides, crops whose seeds are in short supply in particular areas, should be provided with those seeds so that the productivity can be increased. Planning should be done for adequate supply of seeds of crops like pulses-oilseeds, cotton etc.

Shri Tomar said that the cooperation of the State Governments is also necessary for seed traceability, so that awareness is raised among farmers across the country and they can take rightful decision regarding the seeds for their plantation as per the requirement. Shri Tomar said that Prime Minister Shri Modi’s emphasis is also on increasing productivity in agriculture, as well as reducing the cost. We have to plan how farmers can get quality seeds at cheaper price and the price difference between private and government agencies is bridged. He said that on the occasion of Amrit Mahotsav of the Nation’s Independence, everyone needs to introspect. If our country becomes AatmaNirbhar in seeds availability, then only we will be able to supply to other countries in large quantities.

Speaking on the occasion, Minister of State for Agriculture and Farmers Welfare, Ms. Shobha Karandlaje said it should be ensured that the varieties of seeds developed by the Indian Council of Agricultural Research reach the farmers at the grassroots level. Along with this, the states should work in a planned manner at the district level on all aspects related to the agriculture sector, so that the farmers do not face any problem.

Addressing the webinar, the Union Agriculture Secretary Shri Manoj Ahuja said that arrangements should be made to provide quality seeds to the farmers right down to the Panchayat level, while awareness should be raiased among the farmers about testing of seed quality. Additional Secretary, Union Ministry of Agriculture and Farmers Welfare, Shri Abhilaksh Likhi and other senior officers were present in the programme. Senior officials of the Agriculture Department of the states and the representatives of the Seed Corporations of the Center and the States joined the webinar virtually. The webinar was conducted by Shri Ashwini Kumar, Joint Secretary (Seeds). He informed that the government is working for setting up seed testing laboratories at the Panchayat level.