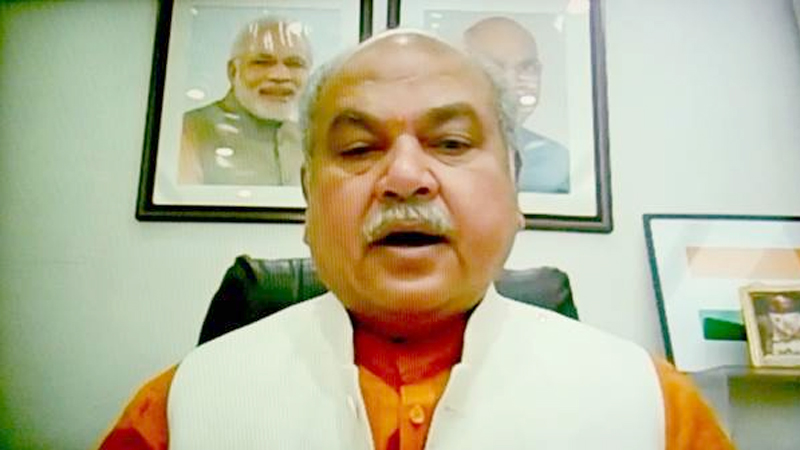 The Union Minister of Agriculture and Farmers Welfare, Shri Narendra Singh Tomar, laid the foundation stone of the Indo-Israel Center of Excellence for Vegetables in Chandauli (Uttar Pradesh) through video conferencing. Speaking on the occasion, Shri Tomar said that the Central and State Governments are working together all-round to upgrade Agriculture. “It is necessary for the educated youth to be oriented towards this in order to move forward the Agriculture sector more rapidly in the future,” he said.

Shri Tomar expressed happiness that under the leadership of Chief Minister Yogi Adityanath, progress is being made in various sectors, including Agriculture, in Uttar Pradesh and the State is also contributing better in the development of the country. He also expressed happiness that the schemes of the Central Government are being implemented in Uttar Pradesh and the State has also made rapid strides in organic and natural farming. Expressing hope, the Union Agriculture Minister said that UP, in the coming times, will achieve a new dimension in the field of Agriculture. The way UP has been leading the way in the fields of cultural heritage and scientific knowledge, in the same way it will take the country further in the development of agriculture, he said.

Shri Tomar said that today is a historic day for the Chandauli region. “A new dimension is being added on the occasion of Azadi Ka Amrit Mahotsav. This Center is the result of the efforts of the State Government. Its establishment will play an important role in the development of the district. Also, it will prove to be a revolutionary step in the field of Agriculture in the adjoining districts and districts of Bihar border also. Many new opportunities will be created for progress through Agriculture. Farmers will be able to get better yields by using the latest methods of farming,” he said.

Shri Tomar said that Agriculture should move forward continuously and the quality of production should be at par with the global standards. “In this direction, technology application has to move forward. To attract future generations towards farming, Agriculture has to be rejuvenated. We all need to work seriously on moving towards remunerative crops, use of technology, Digital Agriculture Mission, taking advantage of FPOs and adopting natural and organic farming. Together we will move towards fulfilling our priority and obligations,” he said.

Shri Tomar hoped the establishment of the Indo-Israel Center of Excellence for Vegetables will play an important role in the development of Chandauli district as well as Purvanchal region. “Here seeds and plants of improved vegetables will be cultivated and distributed to the farmers. Farmers can also sponsor the development of plants for themselves. Farmers will get a lot of benefit in increasing the production of vegetables. By using the latest methods of farming, farmers will be able to get better yield and also export vegetables. Nursery of other agricultural produce including vegetables will be prepared at this Center of excellence to promote the Agriculture sector globally. This will not only benefit the farmers here, but will help the district be known globally in the field of vegetables and agriculture,” he said.

The Union Minister of Agriculture and Farmers Welfare said it is the intention of the Government that the leading district in the production of paddy and wheat can also emerge better in vegetable production as well. “The climate of Chandauli district, which is known as the rice bowl of UP, is suitable for setting up the Center of Excellence for Vegetables. There are 9 agro-climatic zones in the State which are favourable for the cultivation of various horticultural crops throughout the year. Seedling production of tomato, pepper, brinjal, chilli, cucumber, tomato, pepper, brinjal, chilli and exotic vegetables is proposed to be done in the hi-tech climate controlled greenhouse to be set up in the Center of Excellence for Vegetables, while cultivation of cucumber, cauliflowers, baby corn, sweet corn and exotic vegetables is proposed in the open field. Along with micro-irrigation in the open, a trial demonstration of farming with fertigation and chemigation systems will be done. There will also be a demonstration of installation of seepage, sprinkler irrigation and other plastic culture applications,” he said.

The technology for the Center is provided by Israeli experts under the India-Israel Action Plan (IIAP) with funds for building infrastructure for demonstration purposes from MIDH. Centers of Excellence (CoEs) are being set up in the States based on Israeli technologies. These Centers of Excellence act as demonstration and training centers for the latest technologies in the field of Horticulture. They also serve as a source of planting material for fruits and vegetables in protected cultivation.