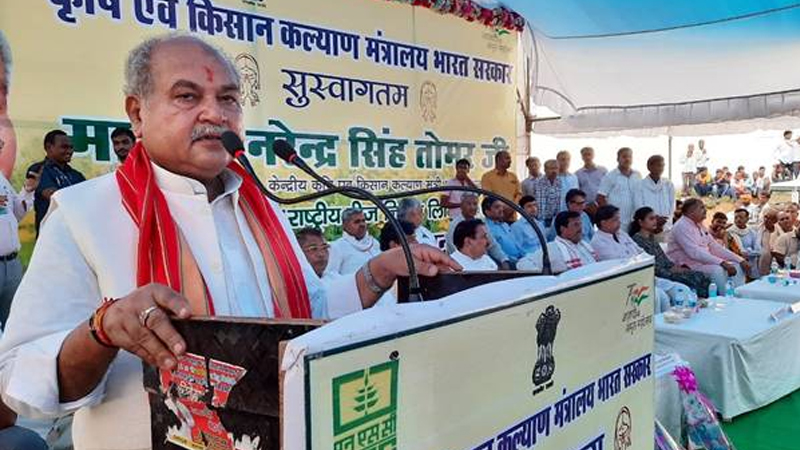 The Union Minister of Agriculture and Farmers Welfare, Shri Narendra Singh Tomar, today laid the foundation stone of an organic seed farm of the National Seed Corporation (NSC) at Morena. Upon its completion, new organic seeds of oilseeds will be available to the farmers of Madhya Pradesh. With this farm, farmers will be introduced to modern techniques, they will get high yielding seeds and their socio-economic status will improve. On this occasion, Shri Tomar announced that the Ministry of Environment, Forest & Climate Change has has taken a big decision to recommend de-notification of 207 hectares land in the National Wildlife Sanctuary of Chambal. Due to this sanctuary area being a revenue land, the availability of sand will be at the local level, which will also increase employment.

Shri Tomar said that the Central Government has decided to establish a farm in Morena (MP) for the production of organic seeds by improving the land in the rugged area. For this, the M.P. Government has allotted 885.34 hectares of land in 4 villages (Gadora, Jakhauna, Rithora Khurd & Gorakha) of Morena to the Union Ministry of Agriculture. This land is a rugged area of ​​Chambal and farming was not possible due to ravines in the area. As NSC is committed to provide quality seeds to the farmers and is producing 15 lakh quintals of quality certified seeds and making them available to the farmers, hence the Agriculture Ministry has entrusted the responsibility of developing a farm in Morena to the NSC for the production of organic seeds. The production of seeds in the Ravines of Morena will improve the land and the land will turn fertile. Inspired by land reforms, local farmers will be able to improve the land in their fields and produce seeds with the latest scientific method and get high economic benefits from low cost of farming. Farmers will get to learn the latest techniques of seed production here. Local and state farmers will be taught the latest seed production techniques through training by NSC experts. Local workers of Morena will get employment through land reforms and seed production in the farm. Farmers will get good production by getting latest and genetically and physically pure organic oilseed seeds from Morena Farm, which will not only improve the socio-economic status of the farmers of the state, but will also provide nutritional security to the farmers.

Shri Tomar said that India’s stature has improved worldwide due to all-round work in the agriculture sector under the leadership of Prime Minister Shri Narendra Modi, our country is working in the spirit of Vasudhaiv Kutumbakam. PM’s slogan is “Jai Jawan, Jai Kisan, Jai Vigyan, Jai Anusandhan”, Morena’s seed farm will make full use of science and research for the progress of farmers. Seed is the basis and main input of agriculture. Shri Tomar said that the availability of good seeds for agriculture benefits the agri-eco-system and the economy as a whole, apart from increasing production & productivity and resulting in higher income for the farmers. Along with ensuring seed availability to  the states, the central government helps in the distribution of seeds through various schemes. The Union Agriculture Ministry has implemented Seeds and Planting Material sub-mission from 2014-15 to increase quality seed production and multiplication of crops, so that farmers get superior seeds in adequate quantity. Seed quality control is being strengthened by the state and public sector seed organizations through various seed related activities. In the last 8 years, 304 varieties have been notified for commercial cultivation. De-notification in part of Chambal National Wildlife Sanctuary will have many benefits:

Due to the de-notification with the efforts of Union Minister and local MP Shri Tomar, this area will be outside the sanctuary area, due to which the sand from here will be available at cheaper prices for construction/development works at the local level and it will also result in new employment opportunities. Shri Tomar had urged the Minister of Environment, Forests and Climate Change, Shri Bhupendra Yadav, regarding the de-notification. The proposal regarding this was discussed in the 69th meeting of the Standing Committee of National Wildlife Board under the chairmanship of Minister Shri Yadav and the committee has decided to recommend de-notifying 207.05 hectare area of the sanctuary,  as follows- Barodia Bindi (9.49 ha in Sabalgarh range of Distt. Sheopur), 118.66 ha in Barwasin (Range-Dewari, District Morena). and 78.90 ha in Rajghat (Piprai) (Range- Dewari, Jaura, District-Morena). With this de-notification, illegal sand mining will be curbed. More than 4 lakh population directly depends on the various products of the protected area. There will be an increase in employment due to sand mining at the local level.

On the occasion of foundation stone laying ceremony of the seed farm, Madhya Pradesh Horticulture and Food Processing Minister Shri Bharat Singh Kushwaha and Shri Andal Singh Kansana, Shri Raghuraj Kansana, Shri Girraj Dandotia, Shri Subedar Singh Sikarwar along with other public representatives and district officials and farmers and workers were present. Initially, Shri Ashwini Kumar, MD of NSC and Joint Secretary in the Agriculture Ministry, delivered the welcomed address. On the occasion, seeds were distributed to the farmers by Shri Tomar. 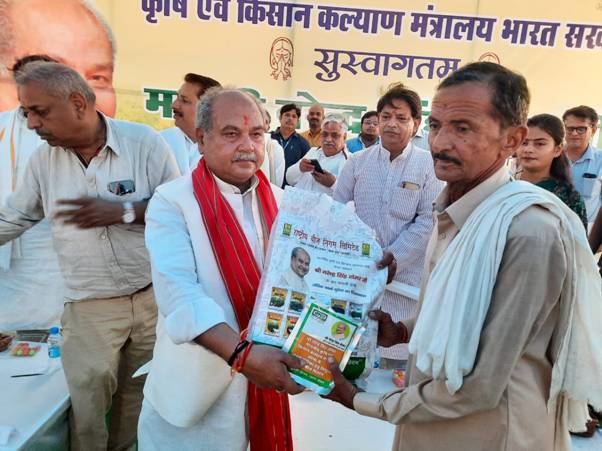