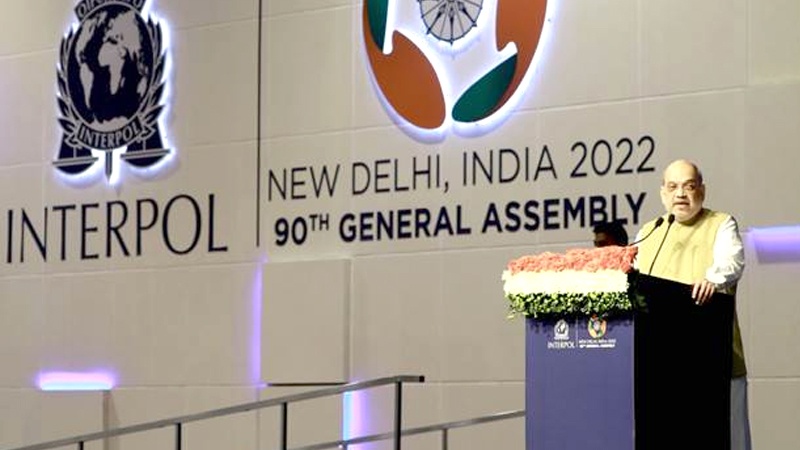 The Union Home and Cooperation Minister, Shri Amit Shah addressed the concluding session of the 90th INTERPOL General Assembly in New Delhi today. Several dignitaries including the Chairman, INTERPOL and the Director, CBI were present on the occasion. In his address, the Union Home Minister said that, 21st  October is very important day for the Indian Police and India celebrates this day as Police Commemoration Day. He said 35,000 policemen have made the supreme sacrifice for the securing India’s unity and democracy and Indians pay tribute to these immortal martyrs on this day. He said after the COVID-19 pandemic, organizing the General Assembly of INTERPOL in New Delhi is important in itself. The world has experienced the human face of the ‘police’ during the COVID-19 pandemic and the world has changed the way it looks at the police

Shri Amit Shah said in the last 100 years, INTERPOL has become a comprehensive and effective forum of 195 countries, which is playing a vital role in cracking down on crimes around the world. Shri Shah said India is one of the oldest members of INTERPOL and India has been associated with INTERPOL since 1949. In today’s world a platform like INTERPOL is very important and vital for cooperation and multilateralism. He said the Government of India, the Ministry of Home Affairs and various Indian Police Forces appreciate the meaningful efforts and contributions of INTERPOL for public security, world peace and stability. The Union Home Minister said the Criminal Justice System is not a new thing for India. Perhaps first of all, both contemplation and concern on the criminal justice system originated in India. Whenever the State was conceptualized, police systems would probably have emerged as the first important function of the State and the safety of citizens is the foremost responsibility of any State. He said one can see deep understanding of jurisprudence and punishment in Indian historical texts and epics. Thousands of years ago in the Ramayan and in their writings Vidura, Shukracharya, Chanakya, Thirukural etc. have accepted the principle of “Amicable Justice and Due Punishment”. Shri Shah said there is a shloka in Chapter 15 in the Shantiparva of the Mahabharata, which means –

“The system of justice is an important part of every effective and successful government system to keep criminals under control. Justice is what ensures good governance in society. If justice is awake during the night, it is then only that citizens and society remain fearless, and a good society is formed.” The Union Home Minister said in today’s world of data and information revolution, the nature of both crime and criminal has changed. At present there is no geographical boundary of crime, if such crimes and criminals are to be stopped, then all of us have to think and act above the Conventional Geographical Border. Shri Shah said that in view of the ‘criminal syndicates’ colluding at the international level using modern technology, there is no reason why countries should not cooperate and coordinate with each other. He said our police and law enforcement agencies are faced with the twin challenge of enforcing the law within the ambit of the sovereignty of the State and understanding the global nature of crime, detecting criminals, and worrying about justice. Shri Shah said amidst these challenges, the role of INTERPOL in easing the work of security agencies is important, and this will be even more important in the future.

The Union Home Minister, while drawing the attention of the General Assembly to some issues in this direction, said that terrorism is a global problem today and it is extremely relevant that the first and most important target among the seven global policing goals of Interpol for 2020-25 is “countering the threat of terrorism”. He said terrorism is the biggest violation of Human Rights and ‘cross-border cooperation’ is very important to fight ‘cross-border terrorism’, without this we cannot fight cross-border terrorism. He said INTERPOL is the best platform for this. Shri Shah emphasized that first of all countries have to agree on the definition of ‘terrorism’ and ‘terrorist’. If there is no consensus on the definitions of ‘terrorism’ and ‘terrorist’, then we cannot fight the global battle in unison.

The Union Home Minister said that the commitment to fight against terrorism together and narratives like ‘good terrorism, bad terrorism’ and ‘terrorist attack – big or small’… both cannot go together. He said that it is also necessary to build a consensus on the challenge of terrorist ideology being spread from across the border by online radicalization. He said we cannot see it as political ideology. If we consider the promotion of online radicalization as a political problem, then our fight against terrorism will be half-hearted. Let us all commit to ensure that the effective fight against terrorism must be long-lasting, comprehensive and sustainable. Shri Shah said India is committed to fight all forms of global terrorism and work with INTERPOL to provide technical assistance and human resources.

Shri Amit Shah said it has been observed that in many countries the nodal agency of INTERPOL and the counter-terror agency of the country are different, in such a situation it is difficult for all counter-terrorism agencies of the world to come together to tackle the challenge of terrorism. He urged INTERPOL to consider a permanent mechanism to establish a ‘real-time information exchange line’ between the counter-terrorism agencies of all member countries. He said this system will further strengthen the fight against terrorism in the coming days.

The Union Home Minister said that on the occasion of 75th year of India’s Independence, Prime Minister Narendra Modi has set the goal of a ‘Drugs free India’ for the Nation. He said in view of the emerging trends of global trade of narcotics and challenges such as narco-terror, there is need for closer cooperation in areas like platforms for exchange of information and intelligence among all nations, intelligence-based joint operations, regional maritime security cooperation, mutual legal assistance, effective mechanism to combat money laundering. Shri Shah said the Narcotics Control Bureau of India has achieved very good success in the seizure of narcotics, their destruction, and conclusion of cases. Referring to INTERPOL’s ‘Operation Lion-fish’ and India’s ‘Operation Garuda’, he said in ‘Operation Lion-fish’ India has achieved a great success by making the biggest seizure. He said more work needs to be done by INTERPOL in establishing a real time information exchange network and a comprehensive narco database among anti-narcotics agencies of all member countries.

Shri Amit Shah said INTERPOL is going to begin its centenary year celebrations and he has had an opportunity to witness it. The Union Home Minister said in the last four days, participants at the General Assembly in Delhi had an extensive discussion on ‘Global Crime Trend Report 2022’ and ‘Interpol Vision 2030’. The changes taking place in active policing, metaverse and cyber threat landscape are also being discussed. In addition, two major resolutions to increase the use of INTERPOL’s I-Familia and the International Child Sexual Abuse Database have also been passed. He said when INTERPOL was established in 1923, the challenges of crime and policing of that time and today’s methods have huge differences and more changes will come in the coming decades. Shri Shah said the mentality of crime never changes, but the means are changing.

The Union Home Minister suggested that INTERPOL should prepare a ‘future plan’ for the next 50 years on the basis of its experience and achievements over the last 100 years. He said INTERPOL can also constitute a study group under its auspices, by which detailed research can be done on the challenges of the next 25 and 50 years and their solutions. If a report of World Policing 2048 and 2073 is prepared, then global policing will greatly benefit in the coming 50 years. It would also be relevant to review the scheme after every five years. Shri Shah expressed confidence that this research would prove to be very useful for the Law Enforcement Agencies of member countries. The Union Home Minister handed over the flag of INTERPOL to Austria and conveyed his best wishes for the conduct of the Vienna General Assembly.

The Union Home Minister reiterated his commitment from India’s side that India is committed to working with INTERPOL in a collaborative role to combat terrorism in all its forms, such as narco-terror, online radicalization, organized syndicates and money laundering. He said in this context, India is committed to assist INTERPOL in setting up a dedicated centre or convention and launching a dedicated communication network for counter-terrorism and anti-narcotics agencies around the world. Shri Amit Shah appreciated the INTERPOL and CBI for the successful conduct of the General Assembly.