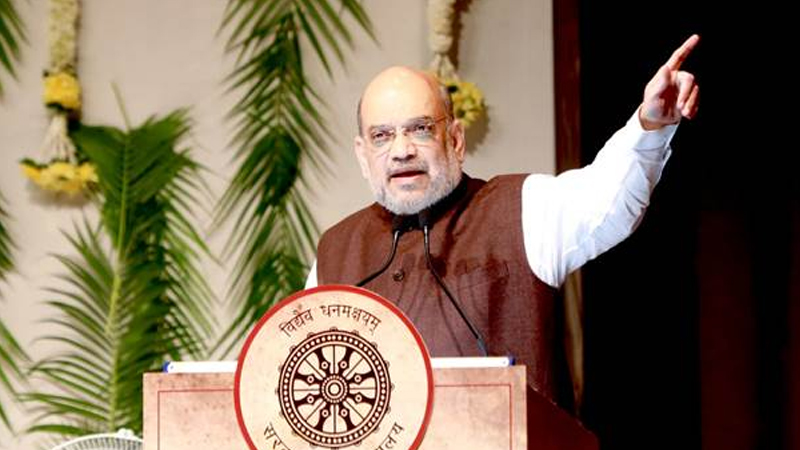 The Union Minister for Home and Cooperation, Shri Amit Shah addressed the function organized by Gujarat Education Society on the birth anniversary of Sardar Vallabhbhai Patel as the chief guest at Sardar Patel Vidyalaya in New Delhi today. 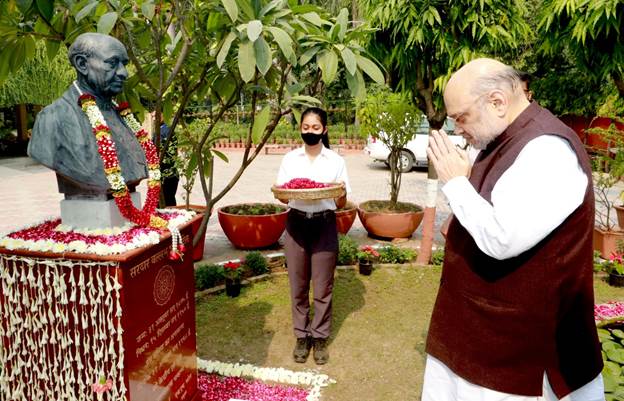 On the occasion, Shri Amit Shah said that Sardar Vallabhbhai Patel was a ‘Karma Yogi’ who worked with commitment to actualise the thoughts. Sardar Patel devoted his whole life to the independence of India, to build a united India and to lay the foundation of a New India. Shri Shah said that Attempts were made to diminish the legacy of Sardar Patel for a long time, as it took many years to felicitate him with Bharat Ratna, build Sardar Patel’s memorial and create an inspiration for young children by compiling his thoughts. Shri Shah said that Sardar Patel is immortal and unshakable through his works. Sardar Saheb was a visionary, genuine and grounded person.

The Union Home Minister said that we are celebrating the Azadi ka Amrit Mahotsav and the thoughts of Sardar Patel are as relevant today as they were in the 19th century. He said that Prime Minister Narendra Modi paid tribute to Sardar Patel this morning at the Statue of Unity, the tallest statue in the world. Under the leadership of Prime Minister Narendra Modi Statue of Unity was made by melting the iron of agricultural implements of crores of farmers of more than 3 lakh villages of the country, Prime Minister ensured that the hope, expectation and dreams of the whole country are cherished in this statue.

Shri Amit Shah said that Sardar Patel used to follow the basic ideology of solving the problems on the ground. Sardar Patel also worked to spread the cooperative movement in the country, very few people would know that Sardar Patel sowed the seeds of Amul and Tribhuvandas Patel ji established Amul with the thoughts, guidance and inspiration of Sardar Patel. He said that between 1920 and 1930, voices were being raised against the exploitation of farmers in the country and Gandhiji gave Vallabhbhai the name of Sardar after seeing the skill with which he mobilized the farmers. Shri Shah said it is because of Sardar Patel that Lakshadweep, Andaman and Nicobar, Jodhpur, Junagadh and Hyderabad are part of India today. He said that because of Sardar Patel, the crown jewel of Mother India, Kashmir is also with India today. It was Sardar Patel who decided to send the army in J&K, which defeated the soldiers of Pakistan and ensured that Kashmir remained an integral part of India.

The Home Minister said that without Sardar Patel, the map of India would not have been as it is today. After independence, Sardar Patel worked to aggregate more than 500 princely states and kings-princes from all over India. Shri Shah said that Sardar Patel travelled across the country despite his ill health to unite more than 500 princely states into the Indian Union. He said that after independence the foundation of democracy was laid in India and India was united by the tireless efforts of Sardar Vallabhbhai Patel. At the time of independence, former British Prime Minister Winston Churchill had said that India will be fragmented as soon as the British leave, as Indian leaders are less capable and they will fight for power, But Sardar Patel united the whole country and today India has left behind the same Britain to become the world’s 5th largest economy. 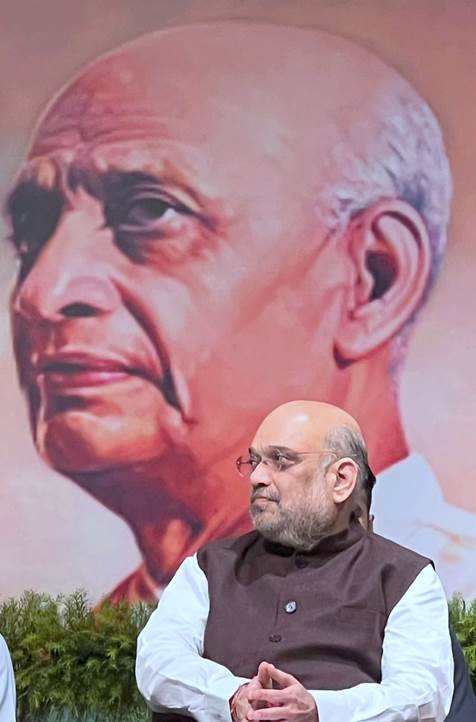 The Union Home Minister said that the foundation of democracy in India has deepened in 75 years and as a result of this, after independence, the mandates given by the people peacefully by means of vote were accepted by all and the leadership in the country has changed many times without any bloodshed. He said that Iron Man Sardar Vallabhbhai Patel worked tirelessly to unite the princely states, as well as laid the foundation of All India Services and Intelligence Bureau, envisioned the Central Police and the molded the administrative services to suit Indian ethos. It is the result of the efforts of Sardar Vallabhbhai Patel that the center-state structure in India has been formulated in such a way that there is no friction of any kind and as a result of this there is no contradiction between the center and states today. 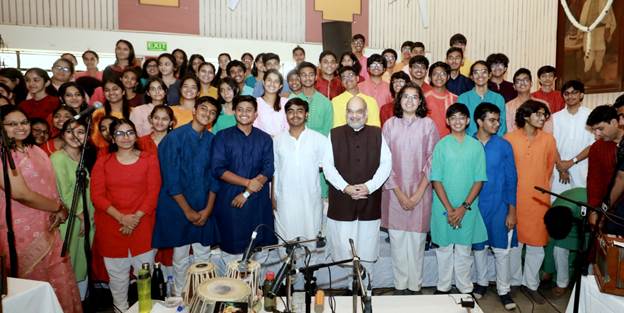 The Home Minister said that the 75 years after independence were very difficult. Sometimes the country had to face war and sometimes terrorism. The country also had to withstand global and economic problems, but in spite of all these difficulties, foundation of democracy has been deepened in India through inclusive and all-round development. Guided the country according to the spirit of the constitution and ensured the security of the country, due to which no one in the world can dare to insult India’s army and border. He said that India has pushed forward its economy with a strong impetus, and in a few years, India will reach closer to the major countries of the world in terms of infrastructure as well. Shri Shah said that Prime Minister Shri Narendra Modi decided to celebrate the Azadi ka Amrit Mahotsav with three objectives. One, the coming young generation of the country should understand the freedom movement and struggle, second, let us know what we have achieved in 75 years and third, let us all set the goal for the centenary year of independence. He urged the youth present to take one small resolution and be committed to fulfill it. Shri Shah said that if India’s future is bright, then only our future is bright.

Shri Amit Shah thanked the Gujarat Education Society and said that in Sardar Patel Vidyalaya, the entire primary education is imparted in mother tongue. Students also get the opportunity to learn Tamil, Urdu and Bengali along with Hindi. He said that we will not allow any language and dialect of India to disappear. Shri Shah urged the youth to learn any language but never leave the mother tongue because the best medium to enhance the ability of a person, to arrive at a decision and process the analysis, is the mother tongue. He said that knowledge of English is linked with intellectual ability in the country but language is only a medium of expression, language is not a sign of ability and if you have ability then the world will have to listen to you. Shri Shah urged the parents to converse in their mother tongue with the children. He said that it is the responsibility of the youth to break the atmosphere of the inferiority complex created due to language. He said that if we give the credit of contribution in the development of the country to only a few people who speak good English, then most of the children who think, speak, write, research and develop in their language will be cut off from the process of development. He said that through language we know our culture and literature and make the process of thinking more powerful and intense. An important dimension of the new National Education Policy of the Modi government is that the primary education of children should be in their own language, technical education, research and medical education should also be available in the regional language.

The Union Home Minister said that we have to make an India full of confidence based on the vision of Mahatma Gandhi and Sardar Patel, which will come out at the forefront of the world competition and such an India can be made only when we leave the inferiority complex of language. He said that despite of efforts made by some people to forget Sardar Patel , Sardar is still in the mind of every person of the country because he was a practical leader son of India’s soil and a symbol of Indian culture who never desired to achieve fame. Iron Man of India ‘Sardar Patel’ , even after getting the most votes in the Congress Working Committee at the time of independence, gave up the post of Prime Minister of the country so that the new government that was to be formed remain free from controversy and our enemies would not be strengthened. The Home Minister asked all the students to read about Sardar Vallabhbhai Patel and try to follow the path shown by him so that Prime Minister Shri Narendra Modi’s campaign to make India the foremost country in the world in the centenary of independence gets strength.