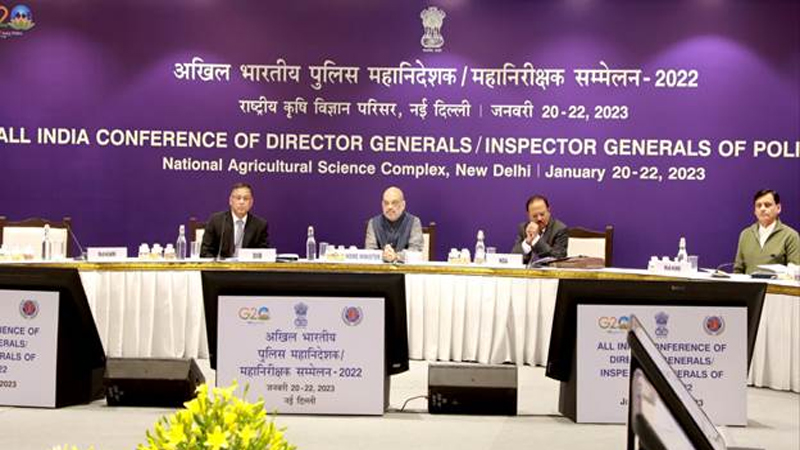 The 57th Directors General of Police / Inspectors General of Police Conference was inaugurated by the Union Home Minister Shri Amit Shah today in New Delhi. DGsP/IGsP of all States/UTs and heads of the CAPs are attending from New Delhi. Organised in hybrid mode, approximately 600 officers of various levels are attending virtually from various States/UTs.

Shri Amit Shah, in his address, emphasised the Prime Minister Shri Narendra Modi’s vision of making India a developed nation by 2047 and a five-trillion-dollar economy by 2025. Highlighting internal security achievements in J&K, North-East and LWE, Union Home Minister laid the road-map for tackling challenges in the next ten years. UHM mentioned about building capacity in the police forces and securing critical infrastructure sectors, apart from specialised approach to protect digital public goods. He advocated better Centre and State coordination for addressing challenges such as Narco smuggling, Hawala and urban policing.

On the first day, the Conference deliberated upon topics such as security challenges along the Land Borders with Nepal and Myanmar, strategies to identify overstaying foreigners in India and targeting of Maoist strongholds. Over the next two days, top police leadership of the country would deliberate on emerging security challenges and opportunities along with experts, field functionaries and academia.

Union Home Minister distributed Police Medal for meritorious service and gave away trophies for the top three police stations of the country.