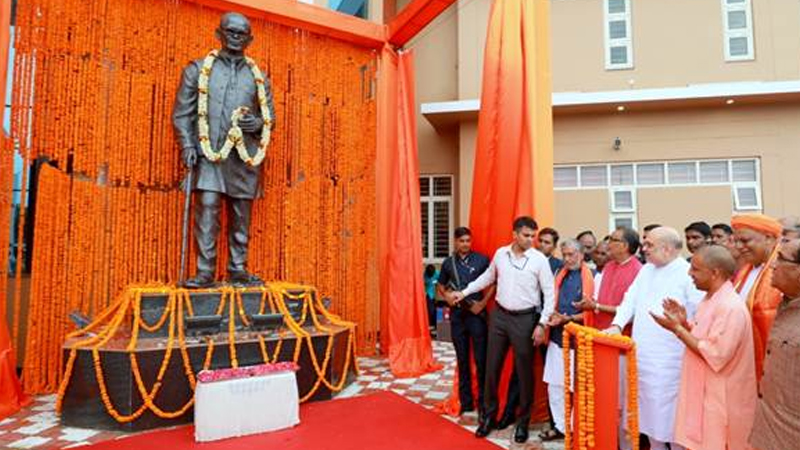 On the occasion of birth anniversary of Lok Nayak Jayaprakash Narayan, Union Home and Cooperation Minister Shri Amit Shah unveiled his statue and addressed a public meeting at Sitab Diara, at his birthplace in Bihar. Several dignitaries including Uttar Pradesh Chief Minister Shri Yogi Adityanath, Union Minister of State for Ministry of Consumer Affairs, Food and Public Distribution; and Ministry of Environment, Forest and Climate Change Shri Ashwin Choubey and Minister of State for Home Affairs Shri Nityanand Rai were also present on the occasion.

In his address, Shri Amit Shah said that Prime Minister Narendra Modi had vowed to install a life-size statue of Shri Jaiprakash Narayan by bringing a proposal in the Cabinet and today that vow has been fulfilled on Shri Jayaprakash’s 121st Birth Anniversary. Shri Shah said that Shri Jayaprakash Narayan’s life was full of many specialties, Shri Jaiprakash not only fought for freedom from the path of movement but he also adopted the path shown by Mahatma Gandhi. After Independence, when the time came to take power, Shri Jayaprakash joined the Sarvodaya Movement like a sanyasi along with Vinoba Bhave. Shri Jayaprakash Narayan devoted his entire life to the landless, poor, downtrodden and backward people. The Union Home Minister said that Shri Jayaprakash gave many new proposals to realize the ideology of socialism, Sarvodaya and the creation of a casteless society. But his biggest contribution to the country was the movement in the 1970s against corruption and the Emergency imposed by corrupt government. The Union Home and Cooperation Minister said that in 1973, the then government in Gujarat publicly gave the Government the task of raising funds, due to which whole scale corruption started. Against this, the students of Gujarat under the leadership of Shri Jayaprakash Narayan made a strong movement and changed the government in Gujarat. After that there was an agitation in Bihar and witnessing the rally at Gandhi Maidan in Bihar, left the then Prime Minister worried. After this, Emergency was declared and along with Shri Jayaprakash Narayan, many Opposition leaders were imprisoned. The then Prime Minister believed that by putting in jail leaders like Jayaprakash Narayan, Morarji Desai, L.K. Advani and Atal Behari Vajpayee would be demoralized. When in the Quit India Movement of 1942, jails in Hazaribagh were not able to stop Shri Jaiprakash, the torture of the then Prime Minister also could not even stop him. Shri Shah said that Shri Jayaprakash Narayan formed the first non-Congress government in the country by uniting the entire opposition against the corrupt and unjust government that imposed Emergency. Shri JP set an excellent example of change in front of the country by staying out of power. 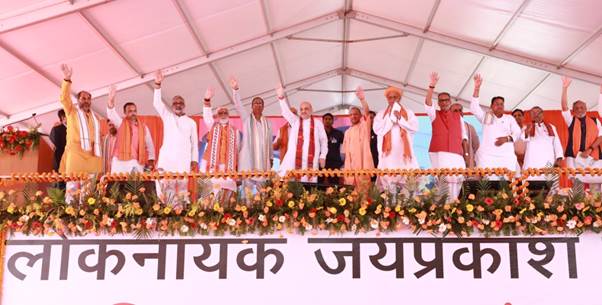 Shri Amit Shah said that Prime Minister Narendra Modi is doing an unprecedented work for welfare of poor by combining the principle of Sarvodaya of Shri Jayaprakash Narayan and Shri Vinoba Bhave with Antyodaya. Prime Minister Narendra Modi has provided health insurance of more than Rs. 5 lakh to 60 crore needy persons, gas and toilets to every poor person’s home, free ration to every poor person for two and a half years, electricity in every house and connected every village by building roads. He said that Shri Jaiprakash Narayan had given the slogan of Total Revolution, but no Opposition party tried to make it successful. By working for improving the standard of living of crores of poor across the country, Shri Modi has worked to fulfill the mantra of complete revolution of Shri Jayaprakash Narayan. Prime Minister Narendra Modi has given a ray of hope to 60 crore people by raising their standard of living, creating employment opportunities for them and giving them LPG connections. 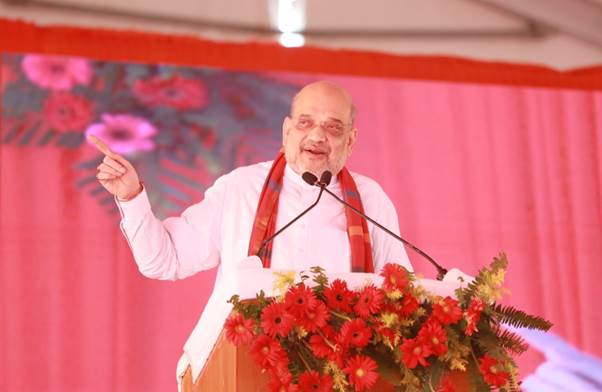 The Union Home Minister said that students of all ideologies had participated in the apolitical movement that Shri Jaiprakash started in Bihar in 1974. People who came into politics by taking the name of Shri JP, have now changed sides and have bypassed the principles of Shri JP, and today they are sitting in the government of the opposition for the pleasure of power. Shri Amit Shah said that the people of Bihar have to decide whether they will support the government led by Prime Minister Narendra Modi who is following the path shown by Shri Jayaprakash or the government which deviates from the path of Shri JP and forms alliances for power. Shri Shah said that today a huge memorial has been built for the principles of Shri JP at his birthplace. He said that by taking inspiration from Shri JP’s ideas, the coming generation could give a new impetus to the development of the country, for this purpose, Shri Narendra Modi also decided to build a research centre along with the memorial here. After the formation of R&D centre here, the students will be able to research the principles of Shri JP and his work done for rural development. Shri Amit Shah said that Shri Jaiprakash has made a huge contribution through his work in cooperative, village upliftment and Sarvodaya and today on his birth anniversary the Nation is remembering Shri Jaiprakash Narayan.