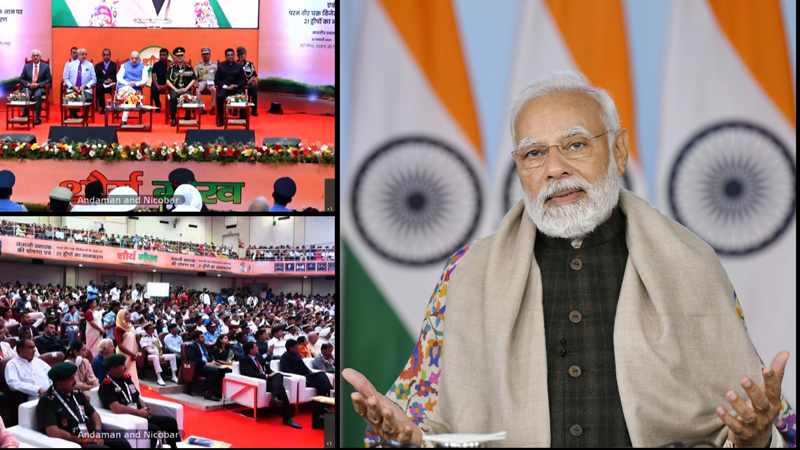 On Parakram Diwas, the Prime Minister, Shri Narendra Modi participated in a ceremony to name the 21 largest unnamed islands of Andaman & Nicobar Islands after 21 Param Vir Chakra awardees today via video conferencing. During the programme, the Prime Minister also unveiled the model of the National Memorial dedicated to Netaji to be built on Netaji Subhas Chandra Bose Dweep.

Addressing the gathering, the Prime Minister greeted everyone on the occasion of Parakram Diwas and remarked this inspirational day is celebrated countrywide on the occasion of the birth anniversary of Netaji Subhas Chandra Bose. The Prime Minister noted that today is a historical day for Andaman and Nicobar Islands and said, “When history is being made, the future generations not just remember, assess and evaluate it, but also find constant inspiration from it.” The Prime Minister informed that the naming ceremony of 21 islands from the Andaman and Nicobar Islands is taking place today and they will now be recognised as the names of 21 Param Vir Chakra awardees. He further added that the foundation stone of a new memorial in honouring the life of Netaji Subhas Chandra Bose is being laid at the island where he stayed, and remarked that this day will be remembered by future generations as a significant chapter in the Azadi Ka Amrit Kaal. The Prime Minister underlined that the Netaji Memorial and the 21 newly named islands will be a source of constant inspiration for the young generations.

Throwing light on the history of Andaman and Nicobar islands, the Prime Minister informed that the Tricolour was hoisted for the first time here and the first independent government of India was formed. He further added that Veer Savarkar and many other heroes like him had touched the pinnacle of penance and sacrifice for the country on this very land. He said, “The voices of that unprecedented passion along with immense pain are still heard from the cells of the Cellular Jail today.” The Prime Minister lamented that the identity of Andaman was associated with the symbols of slavery instead of the memories of the freedom struggle and said, “Even the names of our islands had the imprint of slavery.” The Prime Minister recalled his visit to Port Blair four-five years ago to rename the three main islands and informed, “Today Ross Island has become Netaji Subhash Chandra Bose Island, Havelock and Neil Islands have become Swaraj and Shaheed Islands.” He noted that the names, Swaraj and Shaheed were given by Netaji himself but no importance was given even after independence. The Prime Minister interjected, “When the Azad Hind Fauj government completed 75 years, our government reinstated these names.”

The Prime Minister observed the 21st century of India which is remembering the same Netaji that was once lost in the pages of history after India’s independence. He highlighted the sky-high Indian flag which is hoisted today at the same spot where Netaji hoisted the Tricolour for the first time in Andaman and remarked that it fills the hearts of all countrymen with patriotism who visit the place. He noted that the new museum and memorial which is going to be built in his memory will make the trip to Andaman even more memorable. The Prime Minister highlighted the Netaji Museum that was inaugurated at the Red Fort of Delhi in 2019 and said that place has become a source of inspiration for the people. He also noted the special events that were held in Bengal on his 125th birth anniversary and the day being declared as Parakram Diwas. “From Bengal to Delhi to Andaman, every part of the country salutes and cherishes the legacy of Netaji”, the Prime Minister remarked.

The Prime Minister highlighted the works related to Netaji Subhash Chandra Bose which should have been done immediately after independence and informed that they have been carried out in the last 8-9 years. He underlined that the first government of independent India was formed in this part of the country in 1943 and the country is accepting it with more pride. He noted that the country paid homage to Netaji by hoisting the flag at the Red Fort on the completion of 75 years of the formation of the Azad Hind Government. The Prime Minister emphasised the demand to declassify files related to Netaji’s life for decades and noted that the work was done with full devotion. “Today, the grand statue of Netaji in front of our democratic institutions and Kartavya Path is reminding us of our duties.”, the Prime Minister said.

Noting that the countries which connected their imminent personalities and freedom fighters with the public in due time and, created and shared capable ideals, are the ones that went far ahead in the race of development and nation-building, the Prime Minister underlined that India is taking similar steps in the Azadi Ka Amrit Kaal.

Highlighting the unique message of ‘Ek Bharat Shreshtha Bharat’ behind naming the 21 islands, the Prime Minister said that it is a message of the immortality of the sacrifices made for the country and the bravery and valour of the Indian Army. The Prime Minister underlined that the 21 Paramveer Chakra winners had sacrificed everything to protect  Mother India and noted that the brave soldiers of the Indian Army were from different states, spoke different languages, and dialects and lived different lifestyles but it was the service of Maa Bharti and unwavering devotion for the motherland that united them. “Like the sea connects different islands, the feeling of ‘Ek Bharat, Shrestha Bharat’ unites every child of Mother India”, the Prime Minister remarked. “From Major Somnath Sharma, Piru Singh, Major Shaitan Singh to Captain Manoj Pandey, Subedar Joginder Singh and Lance Naik Albert Ekka, from Veer Abdul Hameed and Major Ramaswamy Parameswaran to all 21 Paramveers, everyone had only one resolve – Nation First! India First! This resolution has now become immortal forever in the name of these islands. A hill in Andaman is also being dedicated in the name of Captain Vikram Batra from the Kargil war”, he said.

The Prime Minister underlined that the naming of the islands of Andaman and Nicobar is not only dedicated to the Paramveer Chakra awardees but also to the Indian armed forces. Recalling that our army had to face wars right from the time of independence, the Prime Minister said that our armed forces have proved their bravery on all fronts. “It is the duty of the country that the soldiers who dedicated themselves to these national defence operations should be widely recognized along with the contributions of the army”, the Prime  Minister continued,  “Today the country is fulfilling that responsibility and it is being recognized in the name of soldiers and armies.”

Throwing light on the potential of the Andaman and Nicobar Islands, the Prime Minister said that it is a land of water, nature, environment, effort, bravery, tradition, tourism, enlightenment, and inspiration, and emphasised the need to identify the potential and recognise the opportunities. The Prime Minister highlighted the work done in the last 8 years and informed that the number of tourists visiting Andaman has doubled in 2022 when compared to 2014. He also noted the boost in employment and income related to tourism. The Prime Minister drew attention to the fact that the identity of the place is also getting diversified as curiosity about the history of independence related to Andaman is also increasing. “Now people are also coming here to know and live the history”, he said. He also noted the rich tribal tradition of the Andaman and Nicobar Islands and said that the memorial related to Netaji Subhash Chandra Bose and honouring the bravery of the army will create a new eagerness among Indians to visit.

The Prime Minister lamented the efforts of the previous government in recognising the country’s potential due to decades of inferiority complex and lack of self-confidence, especially due to distorted ideological politics. “Whether it is our Himalayan states, especially the Northeast, or the oceanic island regions like Andaman and Nicobar, the development in such areas was neglected for decades as these were deemed remote, inaccessible and irrelevant areas”, the Prime Minister remarked. He also observed that the account of the number of islands and islets in India was not maintained. Giving examples of developed island nations like Singapore, Maldives, and Seychelles, the Prime Minister noted that the geographical area of these nations is less than that of Andaman and Nicobar but they have reached new heights with the right use of their resources The Prime Minister underlined that the islands of India also have similar potential and the country is moving forward in this direction. The Prime Minister gave the example of connecting Andaman with fast internet through ‘submarine optical fibre’ which is giving rise to digital payments and other complex services and benefiting the tourists. “Now natural balance and modern resources are being taken forward together in the country”, the Prime Minister said.

Drawing an analogy with the Andaman and Nicobar Island of the past that gave a new direction to the freedom struggle, the Prime Minister concluded his address by mentioning that the region will also give a new impetus to the development of the country in the future. “I am confident, we will build an India that is capable, and will attain the heights of modern development”, the Prime Minister remarked.

Keeping in mind the historical significance of the Andaman & Nicobar Islands and to honour the memory of Netaji Subhas Chandra Bose, Ross Islands was renamed as Netaji Subhash Chandra Bose Dweep by the Prime Minister during his visit to the Island in 2018. Neil Island and Havelock Island were also renamed Shaheed Dweep and Swaraj Dweep.