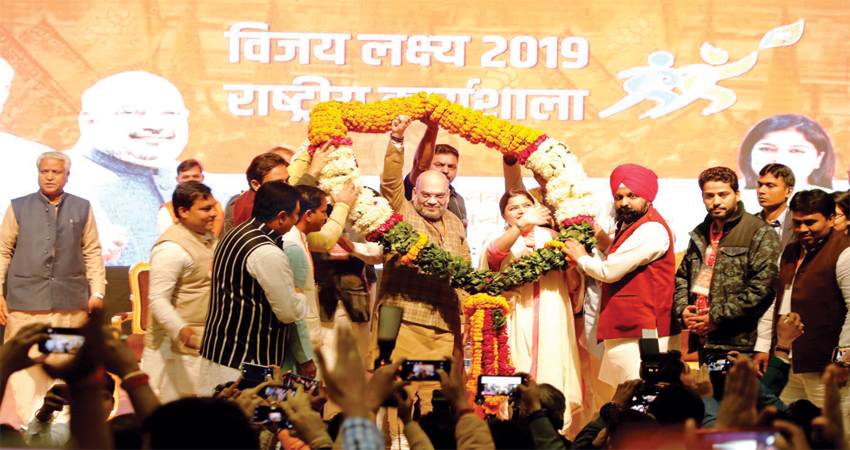 BJP National President Shri Amit Shah exhorted youth of the country to reinforce PM Shri Narendra Modi in the 2019 Lok Sabha polls and ensure that the opposition’s bid to destabilize the developmental process started by the Modi government for the benefits of the common people didn’t be triumphant. “If the youth of the country is united and work together for the agenda of development, no gathbandhan or mahagathbandhan can come in the way of BJP and its agenda of ‘Sabka Sath Sabka Vikas,”
Speaking at the Bharatiya Janata Yuva Morcha’s (BJYM) National Workshop ‘Vijay Lakshya 2019’, at the Syama Prasad Mookerjee Civic Centre in New Delhi on 16 December, 2018 which saw the participation of over 1,000 Yuva Morcha activists—including the National Office Bearers, Executive Committee Members, State Presidents, General Secretaries and District Presidents from across India Shri Shah said, “Development is the message of BJP and young party activists will convey this to each and every Indian”. He also mentioned that the army of 12 crore individuals of BJP would play a very powerful role in 2019.
The BJP National President said, “We are the largest party in the world. PM Shri Modi has consistently followed the agenda of development. People of the country will certainly vote for BJP and Shri Modi will be PM again”.

Shri Arun Jaitley said that parental organisation BJP has high hopes from the Yuva Morcha to spearhead the ‘Vijay Lakshya 2019’ and ensure the BJP was once again voted back to power next year under PM Shri Modi’s leadership. “It is indeed an honour to have a decisive Prime Minister who works with a sole agenda of India First,” he said.

Emphasizing the need of taking the works of the government to the grassroots, he also urged the youth wing office bearers to reach out to every person who have benefited by the schemes of the Central Government.

Addressing the workshop BYJM President Smt. Poonam Mahajan said the Morcha will carry various campaigns on the grass root level and run special campaigns on the social media highlighting the work of the BJP Government at the centre. An elaborate plan will also be laid down to streamline the BJYM work at the district level, she added.

The focus of the workshop was to design a technique for BJYM Karyakartas to how to spread the message of development done by Modi Government at the centre in the run-up to the 2019 elections. Sessions had also been organised on organizational management, dissemination of key schemes and achievements of the government, media and social media management amongst other issues.

During the programme Smt. Mahajan also gave her fellow Karyakartas the mantra of success. She assured BJP National President Shri Amit Shah that BJYM Karyakartas would work day and night to ensure the victory of the party in every state by spreading the message of development and welfare works executed by the Modi government at the centre for the benefits of the common people. She requested the Karyakartas to leave no stone unturned in the 2019 polls and make sure BJP’s victory.

@poonam_mahajan
Humbled to have our Hon. BJP National President Shri @AmitShah ji address the concluding session of #VijayLaksh2019 National @BJYM workshop. Your commitment to the nation and party inspires us every single day.