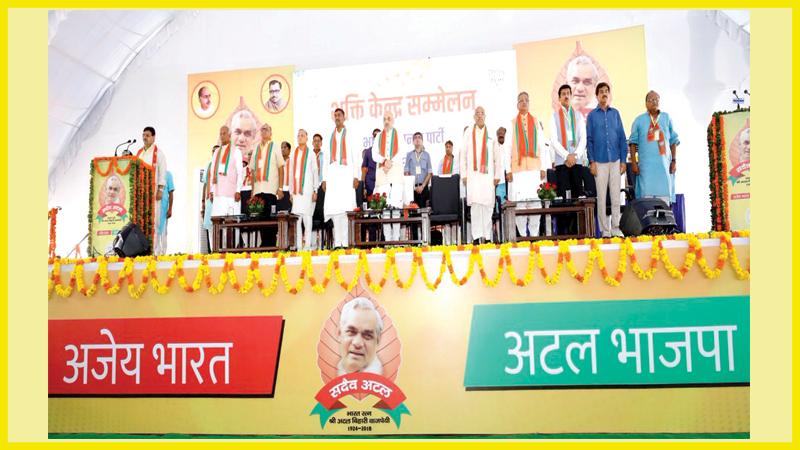 During the one day Rajasthan Pravas, Bharatiya Janata Party National President Shri Amit Shah on 11 September, 2018 asked party workers to sweat for victory in the coming Rajasthan Assembly election, saying the state polls will be a trailer for the 2019 Lok Sabha election. Shri Shah asked them to work hard for winning the elections scheduled later this year without bothering about the position in the government.

The results from the three major states of Rajasthan, Madhya Pradesh and Chhattisgarh will set the trend for the 2019 Lok Sabha elections, he said at a meeting during his one-day Jaipur Pravas.

“The BJP’s victory in the 2019 Lok Sabha elections will pave the way for the party’s rule for the next 50 years,” Shri Shah told BJP workers at the Shakti Kendra Sammelan.

“The assembly elections are a trailer for the 2019 Lok Sabha elections and you need to shed more sweat in the field to ensure a thumping victory,” he said at the Birla auditorium, where he was addressing local bodies’ representatives.

The BJP President said the workers should think only about the party symbol ‘lotus’ and Bharat Mata when they campaign.
He said the Mahagatbandhan, or the grand alliance that the Opposition is talking about will have no impact except a little influence in Uttar Pradesh.

Shri Amit Shah said the workers should ask people what they felt about having Congress president Rahul Gandhi as Prime Minister, West Bengal Chief Minister Mamata Banerjee as external affairs minister and Samajwadi Party’s Mulayam Singh Yadav as defence minister. “You need to tell people about this. Go to the public and highlight the work done by the Modi government and the Raje government,” he said.

Shri Amit Shah said no one can defeat the BJP in Rajasthan.

Targeting Congress, the BJP President said the party should first make clear who its leader is and what are its policies and programmes. “Rahul has the right to dream but he will wake up on the day of counting,” he said.

He claimed the Congress has tried to create a state of confusion in the country and referred to the lynching of Mohammed Akhlaq in Dadri over alleged cow slaughter and the 2015 protest in which a group of writers returned their awards. “During elections, issues like Akhlaq or award wapsi come up,” he said.

“The BJP had won elections when the Akhlaq issue and award wapsi happened, and the party will win this time too even if the Congress brings up some other issue,” he said. “The Modi government or the Raje government has done nothing that you need to bow your head,” he said.

Shri Amit Shah said every party worker should cover at least five villages until the elections, and tell people about the work done by the government, like the surgical strike against Pakistan and the increase in minimum support price for farm produce.