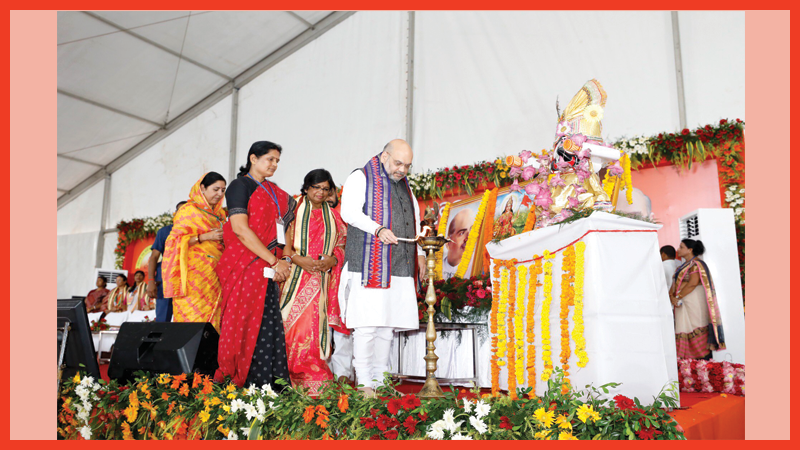 BJP National President Shri Amit Shah slammed the BJD government in Odisha for rejecting the Centre’s newly launched flagship Ayushman Bharat health insurance scheme, saying Chief Minister Naveen Patnaik did so fearing defeat in the 2019 polls. The Ayushman Bharat programme would be implemented in Odisha if the BJP is voted to power in the state, Shri Shah said after inaugurating the National Executive Meeting of BJP Mahila Morcha on 24 September, 2018 in Puri.

“No one can stop the people of Odisha in availing the benefits of Ayushman Bharat. You cannot stop the BJP from helping the poor. We will implement the Ayushman Bharat programme on the first day if the BJP forms government in the state in the 2019 elections,” he said.

Hitting out at BJD Government for rejecting the health insurance scheme, which was launched by the PM in Ranchi, the BJP President said, “Naveen Babu is afraid that Prime Minister Shri Narendra Modi’s popularity will grow further if the scheme is launched in the state. The Chief Minister is worried about his ‘kursi’ (chair) and not for the poor people of Odisha.”

Alleging that Odisha is being governed by officers and not by the people’s representatives, Shri Amit Shah said IAS and IPS officers cannot rule the state. “Odisha is not being governed through democracy, but by the bureaucracy,” he said.

He also said that at least 14 party workers have been killed in the state in the last three years by “government-sponsored” goons. “Naveen Babu, do not try to terrorize the BJP by killing our workers. Our history says that BJP gets stronger when it is attacked,” he said, while saying that BJP is gaining ground in the state with each passing day.

Shri Shah sought to know how Odisha utilised Rs 4.45 lakh crore funds given by the NDA government at the Centre. “The funds meant for the poor people have been misappropriated by officers and BJD leaders. Though the Centre has formulated 129 schemes, they did not reach the people in the villages,” he alleged.

Shri Amit Shah called upon the BJP women office-bearers to take message of the Prime Minister to every household in the state to ensure that BJP forms government in Odisha as well as in the Centre in 2019.

He appealed to the people of Odisha to give the party only five years to serve them and then see the changes. “You have already given 18 years to Naveen Patnaik. Give us only five years and see changes in the life of common people in the state,” Shri Shah said.

The BJP President also slammed opposition parties, including Congress saying they suffered from “Modi phobia” and lacked any agenda for the country’s development.

All partners of the BJP are united and serious about transforming India as the number one country in the world, Shri Shah said. “I want to tell the people that the Congress and opposition parties are working together for breaking India while Modiji is busy in making India,” he said.

The Prime Minister is seeking to eradicate poverty, eliminate unemployment and insecurity among people, but the opposition wants his removal as they have no specific agenda, leader or policies, the BJP National President said.

The BJP National President also said that BJP would observe the birth centenary of Vijaya Raje Scindia year-long from October 12 as a tribute to the leader who made significant contribution to uplift women and for the growth of the BJP.

Comparing the 2019 elections with the battle of Panipat, Shri Shah said the poll is going to be a challenge for the BJP but it would be a question of survival for the opposition parties.