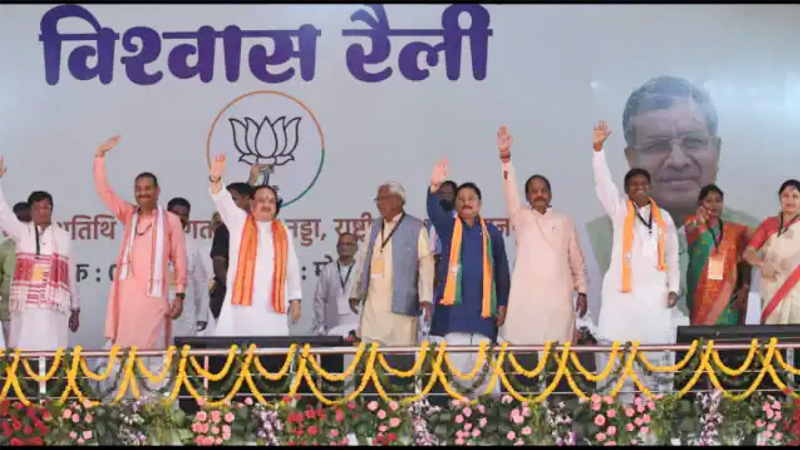 BJP National President Shri Jagat Prakash Nadda addressed a massive ‘Bhagwan Birsa Munda Vishwas Rally’ in Ranchi, Jharkhand on 05 June, 2022. Interacting with the people Shri Nadda said Post Independence if any party has worked for the welfare and empowerment of the Adivasi community it is the Bharatiya Janata Party.
Earlier, it was the Bharatiya Janata Party government under the leadership of former Prime Minister Bharat Ratna Shri Atal Bihari Vajpayee and now under the dynamic and decisive leadership of Prime Minister Shri Narendra Modi which is highly committed for the welfare and development of the Adivasi community across the country.

NO OTHER PARTY CARED FOR THE ADIVASI COMMUNITY

Shri Nadda said the journey of transformation of India which began under the leadership of Shri Narendra Modi in 2014 is also the period of restoration of self respect and self esteem of our Adivasi brothers and sisters. In the past 70 years since our Independence no other party has cared for the Adivasi community, it is only the Bharatiya Janata Party which has worked for the welfare and wellbeing of our Adivasi brothers and sisters. We are working hard to empower our poor and weak communities; on the other hand the Hemant Soren government is engaged in commission and loot and is busy depriving the poor of their rights and privileges.

JHARKHAND SUFFERS DUE TO MIS-GOVERNANCE OF SOREN GOVT.

The BJP National President Shri Nadda said CM Hemant Soren has become synonymous to corruption and commission. Hemant Soren is the Chief Minister but he has taken mining lease on his name and his family members. Under the Hemant Soren government the morale of Naxalites is very high. As a result the incidents of Naxal violence have gone up. Our women are not safe and even our Adivasi brothers and sisters are also being targeted.

The condition of Hemant Soren government is pathetic and it is the people of Jharkhand who are suffering due to mis-governance and corruption. Several cases of corruption and nepotism are directly linked to the office of Jharkhand Chief Minister. Jharkhand police has turned a blind eye to every crime. Under such circumstances the Hemant Soren government has no right to continue in power.

The BJP President said in the memory and respect of Bhagwan Birsa Munda the Narendra Modi Government has declared November 15 which is his birth anniversary to be celebrated as ‘Janjatiya Gaurav Diwas’. This important day is dedicated to the memory of all our great Adivasi leaders and people who fought for our Independence.

Shri Nadda said there is no place to talk about the supreme sacrifices made by our Adivasi brothers and sisters during our freedom struggle. It is for this reason that the Central Government has decided to develop 10 Adivasi Swatantrata Senani Museum across the country in the memory of our great Adivasi freedom fighters.

Highlighting the host of welfare schemes of Modi government Shri Nadda said under the ‘Pradhanmantri Aadi Adarsh Gram Yojna’, 36,428 Adivasi dominated villages across the country are being developed as ‘Adarsh Gram’. Under the Jal Jeevan Mission drinking water is reaching 1.30 crore Adivasi households across the country. Similarly 90 lakh Adivasi brothers and sisters have been given Ayushman Bharat card thus giving them free access to health care. Under the Pradhanmantri Awas Yojana over 39 lakh houses have been sanctioned for our Adivasi brothers and sisters across the country out of which 29 lakh houses have already been constructed, he added.