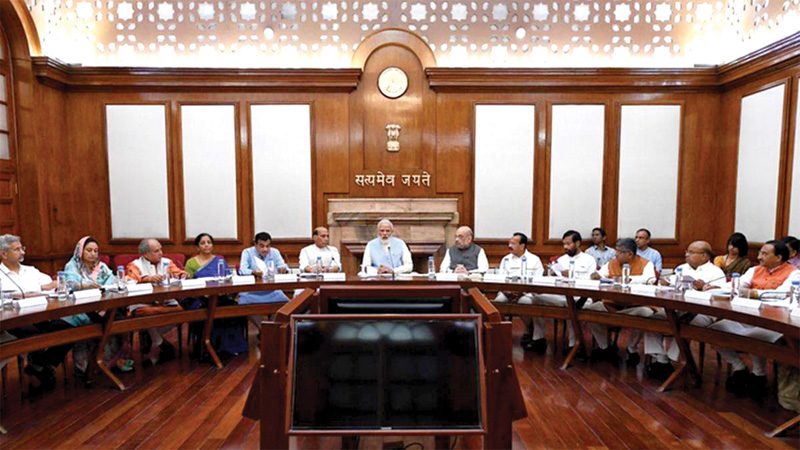 Prime Minister Shri Narendra Modi on May 31, 2019 headed the first Cabinet meeting with the Union Ministers during which a bevy of decisions were taken in the field of education and agriculture.

“Glad that path-breaking decisions were taken in the cabinet, the first in this tenure. Hardworking farmers and industrious traders will benefit greatly due to these decisions,” Shri Narendra Modi tweeted after the meeting of the cabinet. He said the decisions will enhance dignity and empowerment of several Indians.
Here’s a look at the key decisions that were taken at the Prime Minister’s Office.

Now, 14.5 crore farmers to be covered under PM Kisan scheme

In a major push to boost rural consumption, the Modi government in its first Cabinet meeting decided to cover all the farmers, irrespective of their land holdings, under PM Kisan scheme that promises to transfer 6,000 in their bank accounts. The revised scheme envisages to cover 2 crore more farmers with an estimated expenditure of 87,217.50 crore in 2019-20. The previous government had estimated annual expenditure of 75,000 crore in the earlier version of the scheme.

“The Union Cabinet chaired by Prime Minister Shri Narendra Modi approved the extension of PM-Kisan Yojana to all farmers. Nearly 14.5 crore farmers would now benefit from the scheme”.

Pension scheme worth 10,774 crore for farmers

The Union Cabinet also approved a proposal to provide pension cover to crores of farmers. The Centre would spend 10,774.5 crore for a period of three years on this. The decision is expected to address the farm sector distress that has gripped the rural economy for some time now. One of the key contributors to the GDP growth, the agriculture and allied activities shrank in the financial year 2018-19.
As per the official data released, the agriculture sector grew at 2.9% in FY-19 as against the growth rate of 5% in the previous year.

The Modi 2.0 government in its first Cabinet meeting approved a new scheme, which assures minimum monthly pension of 3,000 to all shopkeepers, retail traders and self-employed persons after attaining the age of 60 years, fulfilling its poll promise.
The decision taken at the Union Cabinet meeting chaired by Prime Minister Shri Narendra Modi here will benefit 3 crore retail traders and shopkeepers.

Five crore traders are expected to join the scheme in the next three years, Union Minister Shri Prakash Javadekar said while briefing reporters at a press conference. “All shopkeepers and self employed persons as well as retail traders with GST turnover below 1.5 crore and aged between 18-40 years can enroll for the scheme”.
Interested persons can enroll themselves through over 3.25 lakh common service centres spread across the country. The government will make matching contribution in the subscribers’ account, the statement added.

The Cabinet approved an ambitious scheme with a total outlay of 13,343 crores to fully control these diseases amongst the livestock in the country in the next five years, by subsequently eradicating them.

While briefing media, Shri Javadekar said the scheme is in the interest of the farming community. “This is an existing vaccination scheme under which the Centre and state governments contribute funds in the ratio of 60:40. In a rare instance of departure, the Central government has decided to now bear the entire cost,” the minister said.

The disease of food and mouth disease (FMD) and brucellosis are common among the livestock — cow, bulls, buffaloes, sheep, goats and pigs. The scheme envisages vaccination coverage to 30 crore bovines (cows-bulls and buffaloes) and 20 crore sheep/goat and 10 million pigs.

In its first decision of its second tenure, the government has enhanced the amount to be paid as part of ‘Prime Ministers Scholarship Scheme’ under the National Defence Fund.

The ambit of the scholarship Scheme has also been extended to the wards of state police personnel who “were martyred during terror/naxal attacks”.

The quota of new scholarships for wards of state police personnel will be 500 in a year.

–Now, 14.5 crore farmers to be covered under PM Kisan scheme;

–Farmers will get pension for a period of three years and the Centre would spend 10,774.5 crore

–The Cabinet approved an ambitious scheme with a total outlay of 13,343 crores to fully control these diseases amongst the livestock

–The quota of new scholarships for wards of state police personnel will be 500 in a year.