Defying some of the exit polls and assumed anti-incumbency factor, the people of Bihar reposed their faith in the leadership of Shri Narendra Modi and NDA government.

The people in Bihar once again gave clear mandate to NDA which attained majority in the state assembly. The NDA with 125 seats out of 243, registered a thumping victory in elections. The BJP which had contested 110 seats, won 74 and JD(U) which fought 115, won 43 seats with four seats each won by NDA constituents HAM and VIP. The opposition Mahagathbandhan led by RJD stood at 110.

It was the first election amid Covid crisis. Political pundits had speculated that there was huge anti-incumbency against NDA Government in Bihar as it had been ruling Bihar for a long time. Defying some of the exit polls and assumed anti-incumbency factor, the people of Bihar once again reposed their faith in the leadership of Shri Narendra Modi and NDA government.

As per the current analysis the women, poor and deprived section of society played crucial role in ensuring NDA’s victory in the state. According to the data released by Election Commission the female voter turnout was recorded at 59.7 percent, higher than both overall polling of both 57.05 percent and 54.7 percent male turnout. Of the 38 districts in Bihar, 23 reported higher voter turnout of women than that of men. In all these 23 districts, NDA did better in terms of winning seats.

The BJP has gained massively in this election. In 2015, its tally was 53 out of the 157 seats it contested; in 2020, out of the 110 seats it contested, the BJP has won 74, taking the NDA to victory. The party’s victory in Bihar is the result of people’s faith in PM Shri Modi, and it is now clear that voters of Bihar have rejected dynasty, casteism and politics of appeasement.

A day after the BJP-led National Democratic Alliance (NDA) retained power in the Bihar Assembly elections, Shri Modi addressed party workers in Delhi. He said the BJP was the only party to increase its seats, despite being in power for three terms — the BJP managed to garner 19.5 per cent votes in this election. It was the result of a well-targeted ground work by the party karyakartas that the BJP has managed to make people relate with development-oriented politics in the state.

Apart from this, BJP National President Shri JP Nadda played a crucial role in party’s victory in Bihar. In the assembly constituencies where he had meetings, he succeeded in helping the NDA candidate win most of the seats. Shri Nadda completely threw himself into the Bihar elections as he reached every nook and corner of the state during the election by travelling thousands of kilometres across Bihar to create a favourable environment for the party. Throughout his visits, he was taking the feedback of grassroots workers. Wherever some shortcomings were discovered, he made a strategy to rectify it. Finding a leader from Delhi in every nook and corner of Bihar infused enthusiasm among the grassroots karyakartas.
The BJP National President launched a campaign during covid lockdown in the name of ‘Sewa Hi Sangthan’ to provide food and ration to crores of people capitalizing on the strength of the party organization spread across the country to the extent that the party even arranged slippers for migrant labourers who were returning home. Since Bihar is one of the states from where workers migrate, BJP’s campaign sent out a very positive message among poor voters. In Bihar, party leaders consider the service done during the pandemic as the secret behind the NDA’s victory and the BJP’s rich haul of seats.

Through his rallies, Shri Nadda countered the claims of RJD leader Tejashwi Yadav about jobs saying, “No government in independent India has cabinet note about giving jobs”. 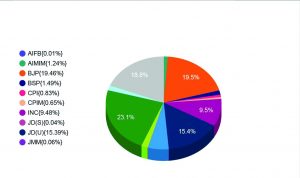 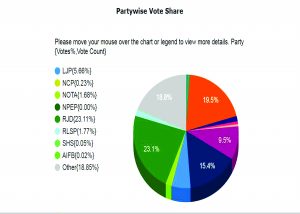 @Devendra Fadnavis
Thanks Bihar!
The people of Bihar have made it clear that they want development, not Jungle Raj! They stamped on leadership of Our beloved Prime Minister @narendramodi Ji. And shown full faith in @NitishKumarji. I congratulate the people of Bihar, and greet them.

@Nityanand Rai
Congratulations to the central leadership and the NDA workers for the clear majority for the NDA in Bihar. This mandate is to carry forward the resolve of bright and self-reliant Bihar of the future.

@-Bhupender Yadav
The enthusiasm with which the voters of the state took part in the celebration of democracy in the Bihar which was held in the midst of Corona situation is itself exemplary. The manner in which women voters of Bihar have enthusiastically participated in the elections is a good sign.

@Sushil Modi
Thanks to the people of Bihar from the depths of heart for the victory of good governance and development.

@-Sanjay jaiswal
The NDA won because of Prime Minister Narendra Modi and his pro-poor policies. People have reposed faith in his leadership.

Bihar has taught the world the first lesson of democracy. Today, Bihar has told the world again how democracy is strengthened. A record number of poor, deprived and women of Bihar voted and have also given their decisive verdict for development…Democracy has won again.
– Narendra Modi

Sabka Saath, Sabka Vikas, Sabka Vishwas is the path on which the government, organization and coalition are working together. The sense of service and welfare of the poor have increased the credibility of the BJP among the people.
– Rajnath Singh

I heartily congratulate and thank the people of Bihar for today’s mandate. The people of Bihar have put their stamp on the public welfare policies of PM @narendramodi ji, the performance of development works and the work of the NDA government under the leadership of Shri Nitish Kumar.
– Jagat Prakash Nadda

Every section of Bihar has once again upheld the development agenda of NDA by denying hollow politics, casteism and appeasement politics. This is the victory of hopes and aspirations of every person in Bihar..it is the triumph of the double engine development of PM Narendra Modi ji and Nitish Kumar ji.
– Amit Shah