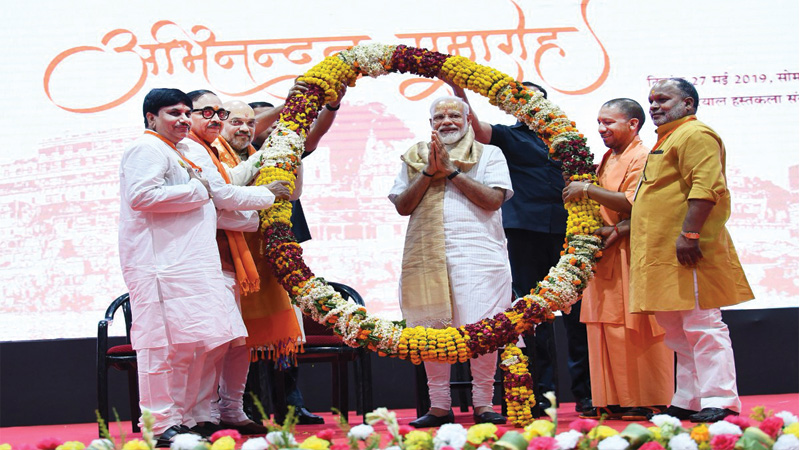 Prime Minister Shri Narendra Modi addressed a large gathering of BJP Karyakartas in his constituency Varanasi on May 27, 2019, in his first visit to the holy city after a massive victory for the BJP in the recently-concluded Lok Sabha elections.
At the gathering, PM Shri Modi thanked the millions of BJP Karyakartas for their constant hard-work which ensured that the people became aware about the government’s achievements and thus voted in support of the BJP.

Acknowledging the importance of the organizational support provided by Karyakartas in strengthening the party and by extension, the government, the PM said, “The BJP relies on its cadre of hard-working, dedicated Karyakartas to reach out to the people and this is what makes us different from the rest because as we have seen this times in states like Bengal and Kerala, BJP Karyakartas have even sacrificed their lives for the cause they believe in. And that is why satisfaction of our workers is our guiding mantra.”

Expressing his humble gratitude for the overwhelming support he has received from the people during the Lok Sabha elections, Prime Minister Shri Modi asserted that such a large support from across the country was made possible because the people had faith in the ‘Saaf Niyat, Sahi Vikas’ approach of the BJP government and added that the numbers given to the BJP this time are unprecedented and reinforce his commitment to work even harder for the betterment of people’s lives.