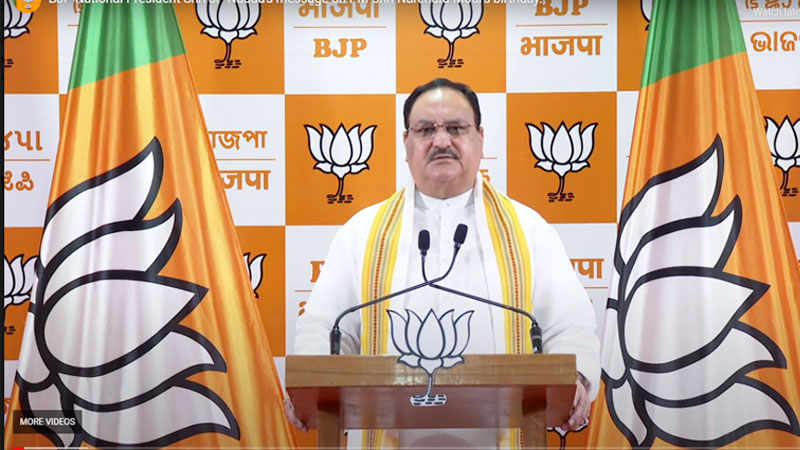 Bharatiya Janata Party National President Shri JP Nadda on 07 October, 2021 congratulated Prime Minister Shri Narendra Modi for completing 20 years of governance and peacefully resolving the issues that ailed the country since independence. Shri Nadda was speaking about the completion of 20 years of governance of PM Shri Narendra Modi as a public representative and giving good governance.

The BJP President while congratulating the PM said that his good governance, decisiveness, disciplined life, vision and patience have been instrumental in peacefully resolving the issues that the country inherited after independence.
Shri Nadda said that the Prime Minister has put India at the centre stage by ensuring decisiveness against terrorism and managing international diplomacy.

It is on October 7, 2001 that Shri Narendra Modi took the oath as Chief Minister of Gujarat. “His journey from being CM of Gujarat to Prime minister of one of the largest democracies is inspiring. He sailed the country through tough times while venturing on the path of being the leader of the world. He led by example, became a karma yogi and gave confidence to the people of the nation to make a new India. As a public representative, I wish the tallest leader of the country on completion of 20 years in governance,” said the BJP National President.

Shri Nadda said, “Our PM walked the path of service, commitment and sacrifice to work for well being of poor and downtrodden and to make India a prosperous country,” who also stated that he considers himself most fortunate to have got an opportunity to work under PM Shri Modi in the organisation, government and party. He said that the people of this country too are fortunate to have a ‘Pradhan Sevak’ like Shri Modi.

Shri Nadda also recounted how as Gujarat CM, the PM laid the foundation of women empowerment with the schemes like ‘Beti bachao, Beti padhao’. Among other schemes recounted, he said it was PM Shri Narendra Modi who started projects like Atmanirbhar state, better electricity supply and water harvesting during his tenure. He managed to get the massive exercise of rehabilitation post-earthquake by making a framework for disaster management in his state.