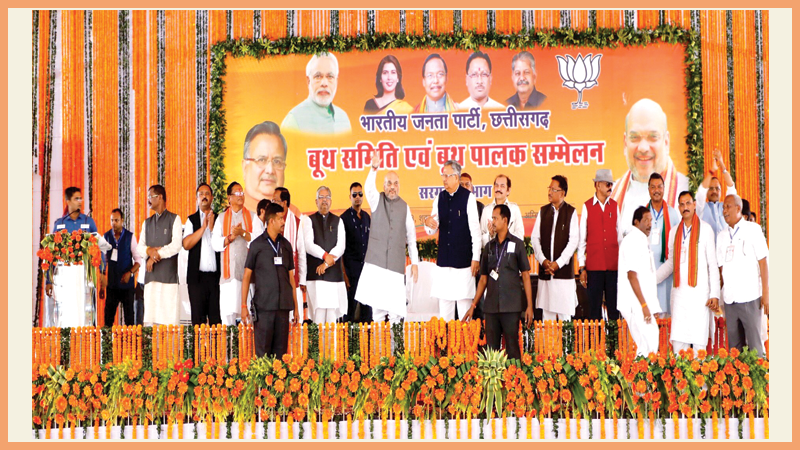 During his Pravas in Chhattisgarh, BJP National President Shri Amit Shah addressed the booth level Karyakarta Sammelan at Ambikapur and Bilaspur in Chhattisgarh on 12 October, 2018. He also held key deliberations with senior party leaders and Party’s in-charge for Chhattisgarh and BJP National General Secretary Dr. Anil Jain for Naxal-hit Bastar region and formulated strategies to improve the seats of the party in the upcoming assembly elections.

Noteworthy, in Bastar region between the seven districts, there are 12 crucial seats. BJP had won nine of them in 2003 and the vote share was 41 per cent. This had improved to 11 in 2008 but came down to four in 2013 though the vote share had jumped to 44 per cent.
During his address at BJP booth workers meet at Jagdalpur and later in the day at intellectuals meet at Raipur, the BJP National President credited the Chief Minister as an able administrator especially for fighting the Naxal menace in this region.
Talking to the booth Karyakarta sammelan in Ambikapur and Bilaspur Shri Amit Shah said the people of Chhattisgarh have resolved to form a BJP Government in the State for the fourth time. This time the party will win more than 65 seats under the leadership of Shri Raman Singh.

The elections in Chhattisgarh is not merely an election of the State, but it is an election over the sacrifices and martyrdom of hundreds of BJP workers in West Bengal, Kerala and other States. The victory should be so strong that it becomes the foundation for massive victory of Prime Minister Shri Narendra Modi during the Lok Sabha elections in 2019, he said.
The BJP President said before seeking votes from people, Congress President Rahul Gandhi should clarify under whose leadership it is going to fight the assembly elections in Chhattisgarh. The Congress has neither the leader, nor the vision, neither the leadership nor any ideology.

Shri Amit Shah said, “Rahul Gandhi is going to contest elections in Chhattisgarh under the leadership of those people who have made fake and forged CDs of women to malign them. This is enough to demonstrate dirty mind of the Congress leaders. Mothers and Sisters from Chhattisgarh would give a befitting reply to the dirty politics of the Congress”.

He said Chhattisgarh was considered an uneducated, dark and backward State under the regime of the Congress. Now it has become known for education, health, connectivity, industry and power hubs.

Shri Shah said while Rahul Gandhi may stand up with those who dream of dividing the country into various parts, the BJP will have zero tolerance for these elements. Under the BJP regime, such anti-national forces would be behind the bars.

He said Rahul Gandhi’s conspiracies are not going to help the Congress anyway. If the Congress returns to power this would mean leaving the State in the hands of the corrupt.

The BJP President said the BJP Government under Dr Raman Singh has uprooted the parallel administration that the Naxals used to run. To tackle the problem on a permanent basis, the State has started working on a war footing with visible positive outcomes.

He said Rahul Gandhi is seeking what we did during the years we have been in power. The people of the State are asking what the Congress did in so many years it has been in power since independence. Four generations of Congress have ruled the State.
The BJP President said the 13th Finance Commission had allocated Rs 48,088 crore where as the Modi Government through the 14th Finance Commission has allocated Rs 1,37,927 crore for the development of the State which was almost three times of what was given by the UPA. The Modi Government has fulfilled the much awaited demand of the farmers by raising the minimum support price to 1.5 times of the input cost. This has been a historic decision. Under the “Ayushman Bharat” scheme, 10 crore poor families which means 50 crore people were being given free assurance of up to Rupees five lakh.

He further said the Congress should explain why it was protecting those determined to divide the country. Whether the party was with Maoists-Naxals or with people of the country. The Congress may not be worried about security of the country but the BJP has always maintained zero tolerance towards anti-nationals.

The BJP National President said Rahul Gandhi may be dreaming about forming a government in Chhattisgarh, Rajasthan and Madhya Pradesh but since 2014 the BJP has been winning in all the elections and the Congress has been losing decisively in these elections. The same fate awaits the Congress in Chhattisgarh, Rajasthan and Madhya Pradesh.