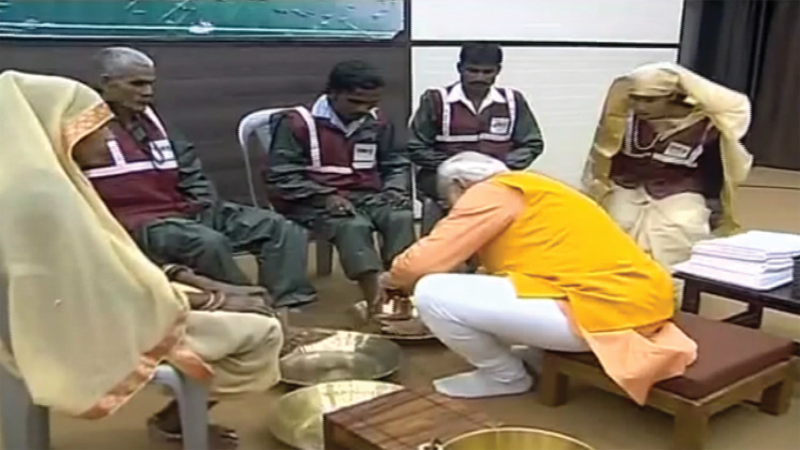 Prime Minister Narendra Modi on February 24 participated in the Swachh Kumbh Swachh Aabhaar event, organised by Ministry of Drinking Water and Sanitation, in Prayagraj. PM also felicitated sanitation workers by washing their feet. He offered prayers at the Sangam — the holy confluence of the sacred Ganga, Yamuna and the mythical Sarawasti rivers — soon after he launched the government’s ambitious income-transfer scheme. PM Modi distributed the Swachh Kumbh Swachh Aabhaar awards to ‘safaai karmacharis’ (sanitation employees), ‘swachhaagrahis’, police personnel and ‘naaviks’ (boatmen). He also washed the feet (a mark of respect according to Indian tradition of the swachhaagrahis.

Prayagraj Kumbh Mela 2019 makes it to the Guinness World Records


Prayagraj Kumbh Mela 2019 has been placed in the Guinness World Records in three sectors. It includes largest traffic and crowd management plan, the biggest painting exercise of public sites under paint my city scheme and biggest sanitation and waste disposal mechanism. A three member team from Guinness World Records visited the Prayagraj for this purpose. Exercise at large scale were done before the team members for three days from February 28 to March 3. Around 503 shuttle buses were pressed into service in one go for the team on February 28 on the highway. Several people participated in painting exercise on March 1 and 10 thousand workers engaged in cleaning at Prayagraj Kumbh performing their duties all together. Only a single bathing festival of Mahashivratri of the six main bathing festivals remains. Five bathing festivals of the Kumbh have concluded successfully with more than 22 crore pilgrims taking a holy dip.

Prime Minister Shri Narendra Modi has donated Rs 21 lakh from his personal savings to the Kumbh Safai Karamchari Corpus Fund (KSKCF). The funds donated by him will be spent on welfare activities for Kumbh sanitation workers.

On February 24, Prime Minister Shri Modi had interacted with sanitation workers, who ensured cleanliness during the religious gathering, after taking a holy dip at the confluence of Ganga, Yamuna, and Saraswati during the Kumbh Mela at Prayagraj.

Even in the past, PM has made several donations for various social causes. Recently, on receiving the Seoul Peace Prize in South Korea, he had immediately announced to donate the entire prize money of Rs 1.3 crore for Namami Gange, to help clean the holy river Ganga.

Upon the completion of his tenure as Chief Minister of Gujarat, PM Shri Modi had donated Rs 21 lakh from his personal savings for educating the daughters of Gujarat government employees. He had also donated Rs 89.96 crore the Kanya Kelavani Fund, aimed at educating girl child.