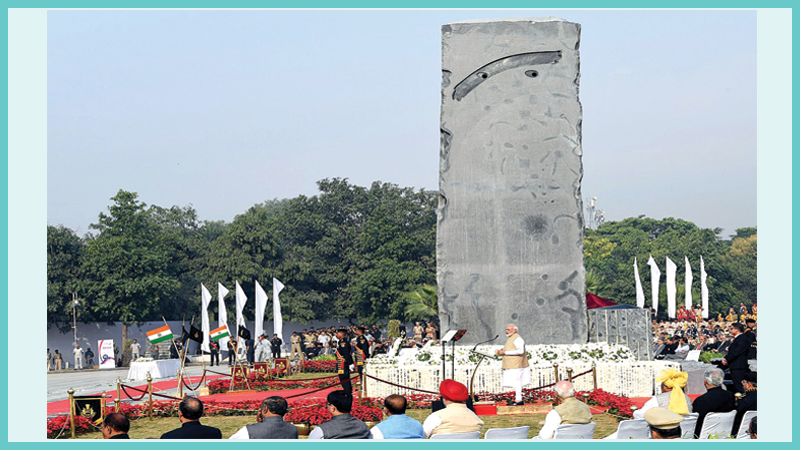 On Police Commemoration Day on 21 October, 2018, Prime Minister Shri Narendra Modi dedicated the National Police Memorial (NPM) to the nation in recognition of the sacrifice made by police personnel since Independence.

21 October is observed as the Police Commemoration Day every year in memory of the policemen killed at Hot Springs in Ladakh by Chinese troops on this date in 1959. Union Home Minister Shri Rajnath Singh, Minister of State for Home Shri Kiren Kiren Rijiju and senior BJP leader Shri Lal Krishna Advani were also present at the event.

“It is the day to remember every jawan who maintains law and order in Jammu & Kashmir and fights against terrorism. Jawans on duty in Naxal-affected areas are doing a great service. It’s also due to them that number of Naxal affected districts are going down and youth is coming to mainstream,” PM Shri Modi said.

Hailing the police personnel of the country PM Shri Modi said it is due to their alertness that the elements which create unrest are unsuccessful in their attempts. The attempts to create fear and insecurity in the nation were foiled by you. The peace prevalent in the nation is possible only due to your services.

The memorial has been erected on 6.12 acres of land in Chanakyapuri, at the northern end of Shanti Path in New Delhi. This memorial represents all State and Central Police Organizations of the country. The central sculpture of the NPM is a 30 feet monolith made of a single piece of granite, weighing 238 tonnes. Its weight and color symbolize the gravitas and solemnity of the supreme sacrifice. A 60-foot long river at the base of the sculpture reflects the continuous self-service of the policeman and woman, to maintain peace and public order.

The Wall of Valour has the names of all 34,844 martyrs engraved on granite.

Since independence 34,844 police personnel have been martyred. Many of these brave lives were lost in the fight against terrorism in Kashmir, Punjab, Assam, Nagaland, Manipur, Mizoram and left-wing extremism affected regions of the country. Further, a large number of police lives were lost in prevention of crime and in maintenance of law and order.