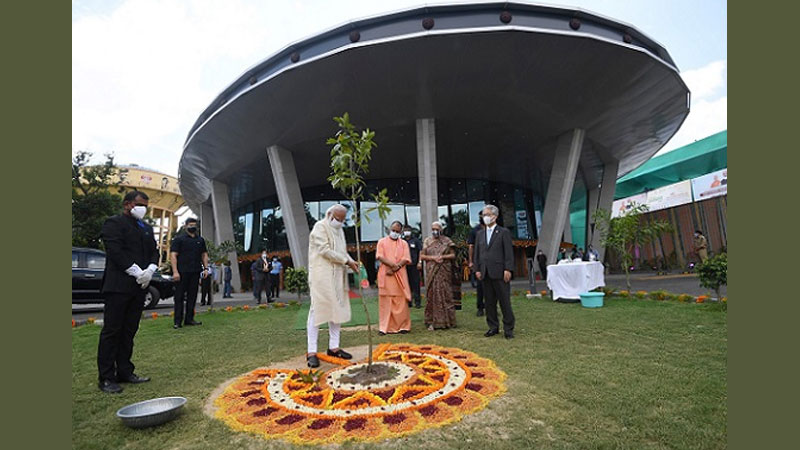 Prime Minister Shri Narendra Modi on July 15 inaugurated the International Cooperation and Convention Centre – Rudraksh in Varanasi, which has been constructed with Japanese assistance. Then he inspected the Maternal and Child Health Wing, BHU. He also met with officials and medical professionals to review Covid preparedness.

Addressing the gathering, the Prime Minister said that despite Covid, the pace of development remains intact in Kashi. He added that the ‘International Cooperation and Convention Center – Rudraksh’ is the result of this creativity and dynamism. He said this Centre shows the strong connect between India and Japan. He lauded Japan’s effort in helping to build the convention centre.

The Prime Minister said songs, music and art flow from veins in Banaras. Here on the ghats of the Ganges so many arts have been developed, knowledge has reached the summit and so many serious thoughts related to humanity have taken place. That is how Banaras can become a huge global centre of music, religion, spirit and of knowledge and science. He added that this Centre will be a cultural hub and a medium to unite different people. He requested the people of Kashi to preserve this Centre.

Kashi has been adorned with so many development projects in the last 7 years, how could this adornment be completed without Rudraksha, said the Prime Minister. Now that Kashi which is the real Shiva has worn this Rudraksha, the development of Kashi will shine more, and the beauty of Kashi will increase more.