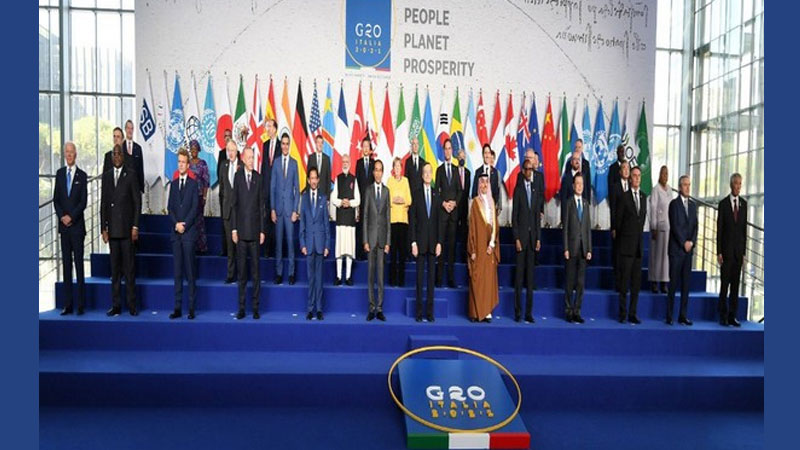 Prime Minster Shri Narendra Modi was on his 5-day visit of Italy and United Kingdom. He stayed in Rome, Italy from 29-31 October, 2021. He attended the 16th G20 Leaders’ Summit at the invitation of Prime Minister of Italy Shri Mario Draghi in Rome. It was Prime Minister’s 8th G-20 Summit which was held for discussion on global economic and health recovery from the pandemic, sustainable development, and climate change. During his visit to Italy, PM Shri Modi also visited the Vatican City to call on His Holiness Pope Francis and met Secretary of State, Cardinal Pietro Parolin.

On the conclusion of the G20 Summit on 31 October, he departed for Glasgow to attend the 26th Conference of Parties (COP-26) to the United Nations Framework Convention on Climate Change (UNFCCC). PM Shri Modi participated in the high-level segment of COP-26 titled ‘World Leaders’ Summit’ (WLS) on 1-2 November, 2021 along with 120 Heads of States/Governments from around the world. Prime Minister Shri Modi also held a number of bilateral meetings with Heads of State and Government on sidelines of the meetings of these multilateral forums.


On 30 October, Prime Minister Shri Narendra Modi addressing the first session of G20 Summit on Global Economy and Global Health stated that they have put forward the vision of ‘One Earth – One Health’ to the world to fight the global corona pandemic.

He said, “Playing the role of Pharmacy of the World, India has delivered medicines to over 150 countries. At the same time, we have put all our energies into accelerating vaccine research and manufacturing. In a short span of time, we have administered over one billion vaccine doses in India. By controlling the transmission of infection in one-sixth of the world’s population, India has also contributed to making the world safer, and has reduced the chances of further mutation of the virus.”

PM assured the leaders that India has given new impetus to bold economic reforms. He invited the G-20 countries to make India their trusted partner in their economic recovery and supply chain diversification. He said India has always been serious about its global obligations.

PM Shri Modi added, “Today, on this G20 platform, I want to tell you all that India is preparing to produce more than 5 billion vaccine doses for the world next year. This commitment of India will go a long way in preventing the global transmission of Corona. Therefore, it is necessary that Indian vaccines be recognized by WHO at the earliest.”

Addressing the second session on climate change, PM Shri Modi said India has never retreated from the responsibility of Mitigation, nor will it ever go back. Due to the efforts made over the years, today India is one of the top 5 countries in the world, in terms of renewable energy capacity. The world also recognizes this success of India. Countries like USA, France, UK, and Sweden are also our partners in many of our initiatives like ISA and CDRI.Going beyond its Paris commitments, India has set a target of rehabilitation of 26 million hectares wastelands. “Indian Railways, the world’s largest passenger carrier serving an average of 8 billion passengers every year, has resolved to ‘Net Zero by 2030’. With this decision, Indian Railways will mitigate carbon emission by 60 million tons per annum. We are working on the target of 20% ethanol blending in petrol by 2025.”

PM suggested three actionable points in front of G-20 partners. First, G-20 countries must create a ‘clean energy projects fund’, which can be used in countries where peaking has not happened yet. This fund can also support other institutions like ISA. Secondly, we must create a network of research institutions working on clean-energy in G20 countries which will work on new technologies as well as their deployment related best practices. Thirdly, G20 countries must create an institution to create global standards in the field of green hydrogen to encourage its production and use. India will also contribute fully to all these efforts.