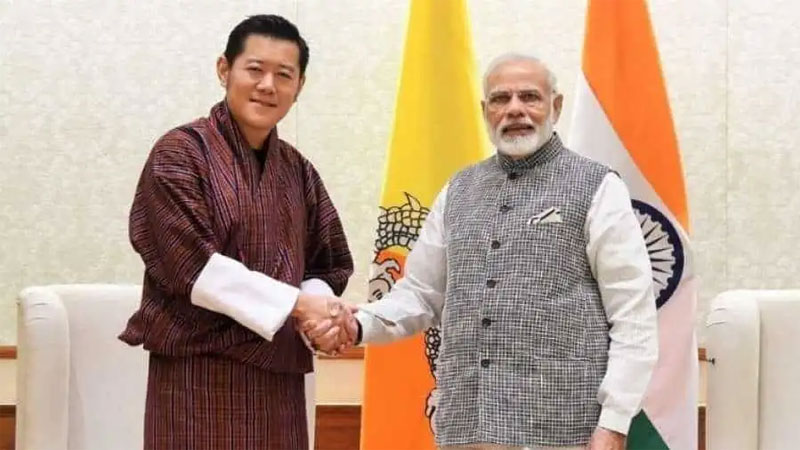 Prime Minister Shri Narendra Modi was recently accorded the highest civilian decoration of Bhutan ‘Ngadag Pel gi Khorlo’ to mark the occasion of the country’s National Day. According to Bhutanese Prime Minister’s Office, the country has conferred PM Shri Modi with its highest award to ‘Thank India’ for its unconditional support extended during the unprecedented times of the COVID-19 pandemic. Expressing his happiness, the Prime Minister of Bhutan was quoted as saying, “Overjoyed to hear His Majesty pronounce Your Excellency Narendra Modiji’s name for the highest civilian decoration, Ngadag Pel gi Khorlo”. Reciprocating the conferment of the honour, Prime Minister Shri Narendra Modi thanked Bhutan’s king for according the country’s highest civilian decoration on him, and said India will always cherish the country as one of its closest friends and neighbors and will continue to support its development journey in every possible way. The Prime Minister of India also admired Bhutan for its unique model of sustainable development and the deeply spiritual way of life and thanked the successive Kings for giving a unique identity to the Kingdom and nurturing the special bond of neighborly friendship that India also shares.

This, however, is not the only international honour conferred on Shri Modi since he became the Prime Minister of India in 2014. Several other international honors have also been bestowed on PM Shri Modi in recent years, including highest civilian honours of many countries for his remarkable contribution to them during very challenging times, and for nurturing and strengthening bilateral relations.
After becoming the Prime Minister of India, Shri Narendra Modi in his very first tenure has influenced the international community with his charismatic leadership, vision, mission and skills. Owing to his creative thinking, exemplary leadership and commitment for the welfare of the global community, many countries of the world including the United States and Russia have awarded him the highest civilian awards of their countries.

PM Shri Modi not only got highest honors of various countries but also influenced various International Organisations and Foundations with his distinct leadership, wholehearted effort, and fulfillment of global responsibilities. That is the reason; the whole world is paying attention to every event and move of Shri Modi and recognizing his altruistic contributions.

• Seoul Peace Prize: Awarded to PM Shri Modi by Seoul Peace Prize Cultural Foundation for his remarkable contributions to the harmony of mankind, reconciliation between nations and to world peace -2018.
• Champions of The Earth: This award conferred on PM Shri Modi in 2018 is United Nation’s highest environmental honor to any individual. The United Nations Environment Programme (UN Environment) established the ‘Champions of the Earth’ in 2005. The Champions of the Earth Award is the annual award established to recognize outstanding environmental leaders from the private/public sectors and from civil society.
• Philip Kotler Presidential award: First-ever award given to PM Shri Narendra Modi -2019
• Global Goalkeeper award: Prime Minister Shri Narendra Modi has been conferred the ‘Global Goalkeeper Award’ by Bill and Melinda Gates Foundation for the Swachh Bharat Abhiyan launched by the government -2019.
• Global Energy and Environment Leadership Award: awarded by PM Shri Narendra Modi by the Cambridge Energy Research Associates CERA (award recognizes the commitment of leadership towards the future of global energy and environment) -2021

In addition to the above honors and awards, PM Shri Narendra Modi has been accorded many other global recognitions including;

These awards and global recognitions for Prime Minister Shri Narendra Modi have not only established him as a true global leader, the profile of the nation has also risen in the region and globally. Under his charismatic leadership a New and Aatmnirbhar India has recommitted itself to the principles of ‘Vasudhaiv
Kutumbakam’. PM Shri Narendra Modi has relentlessly espoused causes for global prosperity and discharged his responsibilities towards the global community even in the trying times of the pandemic. India has certainly proved to be a friend to every nation in need. If the entire world is recognizing the contributions of Prime Minister Shri Narendra Modi, the honours bestowed on him have not only elevated his global reputation, the country and its billion plus population have also been recognized and honoured in the process.

1. Bhutan: PM Shri Narendra Modi accorded the highest civilian award of Bhutan ‘Ngadag Pel gi Khorlo’ in 2021.
2. The United States: PM Shri Modi was given the internationally prestigious ‘Legion of Merit’, the highest award of United States Armed Forces in 2020. The award is conferred for exceptionally meritorious conduct in the performance of outstanding services and achievements.
3. Russia: PM Shri Modi was awarded the ‘Oder of St Andrew’ in 2019. This award was established in 1698.This highest order of the Russian Federation was given to Shri Modi for his exemplary services in promoting India-Russia relations. Shri Narendra Modi is the first Indian who received this award.
4. Maldives: The Order of the Distinguished ‘Rule of Nishan Izzuddin’, the topmost award of Maldives meant for foreign dignitaries, was given to PM Shri Modi in 2019.
5. Afghanistan: PM Shri Modi was awarded the ‘Order of Abdulaziz Al Saud’ in 2016. It is the highest civilian award of the country.
6. Saudi Arabia: The Gulf nation bestowed the ‘Order of Abdulaziz Al Saud, the highest civilian award in Saudi Arabia, on PM Shri Modi in 2016.
7. Palestine: Indian PM Shri Modi received the ‘Grand Collar of the State of Palestine’ Award in 2018.
8. UAE: The highest civilian honour of the United Arab Emirates is the ‘Order of Zayed’ Award which was conferred to PM Shri Narendra Modi in 2019. It is only awarded to the topmost dignitaries of the country.
9. Bahrain: PM Shri Modi was awarded with Bahrain’s top award, the ‘King Hamad Order of the Renaissance’ in 2019.