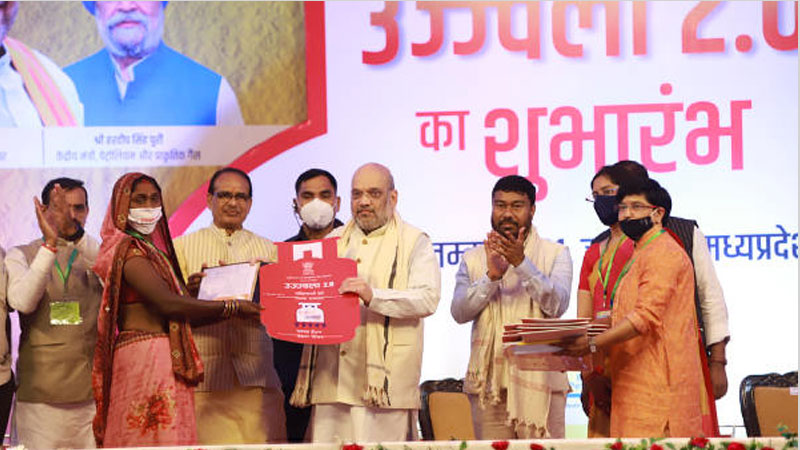 Union Home and Cooperation Minister Shri Amit Shah addressed a programme in honor of tribal heroes as part of the 75th Amrit Mahotsav at Garrison Ground, Sadar, Jabalpur and in another event he addressed people on the occasion of launch of Pradhan Mantri Ujjwala Yojana 2.0 on September 18. He also paid floral tributes to the statues of Raja Shankar Shah and Kunwar Raghunath Shah ji at Malgodam Chowk in Jabalpur. On this occasion, he also performed Bhoomi Pujan of the museum in memory of Amar Shaheed Raja Shankar Shah and Kunwar Raghunath Shah ji. On this occasion Madhya Pradesh Chief Minister Shri Shivraj Singh Chouhan and State BJP President Shri Vishnudutt Sharma and others were present.
Shri Shah said Prime Minister Shri Narendra Modi is marching on the path of making India a strong and self-reliant country with the aim of bringing smiles on the faces of every poor, giving employment to every youth, to teach every illiterate and to feed every hungry person.

He further said that Prime Minister Shri Narendra Modi decided to organise the Azadi Ka Amrit Mahotsav in honour and remembrance of those freedom fighters who were not given due recognition and their contributions were forgotten. All the unknown freedom fighters will be given their due and their supreme sacrifices will be remembered. Programmes will be held so that future generations will continue to remember them.

Union Home and Cooperation Minister Shri Amit Shah addressed the convention of booth presidents of Jabalpur Parliamentary Constituency in Jabalpur on September 18. On this occasion he urge the Karyakartas to spread the achievements of the Modi Government at the Center and Shivraj Government of the State.
Shri Shah said that the Bharatiya Janata Party is a party dedicated to the welfare of the people running on the basis of ideology and organizational strength. He said, the real strength of the Bharatiya Janata Party is its booth workers. My political journey also started as a booth level worker.