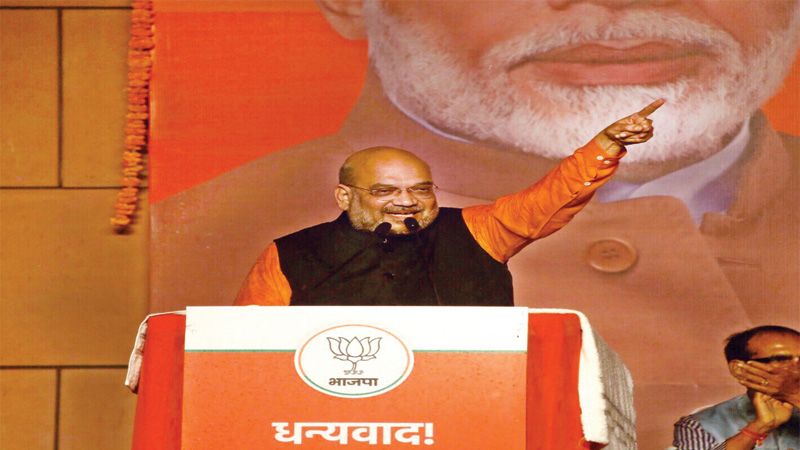 BJP National President Shri Amit Shah who addressed supporters at the party headquarters in New Delhi before the Prime Minister said the victory was an answer to the ideology of the “tukde-tukde gang”.

Shri Shah said the defeat of the Samajwadi Party-Bahujan Samaj Party alliance in Uttar Pradesh indicated that dynasty and caste politics have no place in the country. The BJP got a strong footing in West Bengal and in future it will penetrate more inside the state, he added.

Even after so much violence BJP won 18 seats in West Bengal, Shri Shah said. “It tells that in coming days, BJP will establish its might in West Bengal.”

He took a dig at Andhra Pradesh chief minister and Telugu Desam Party chief N Chandrababu Naidu, and said it would have been better had he focussed on the state instead of meeting Opposition leaders. Naidu’s Telugu Desam Party lost the Assembly elections to Jagan Mohan Reddy of YSR Congress Party.

Rejoicing over the BJP’s continued supremacy in the Hindi heartland in the 2019 elections Shri Shah congratulated the voters for their support. He expressed his satisfaction about the party’s electoral successes in eastern India and said in the coming days BJP will emerge as a mighty force in eastern India. The audience greeted with thunderous applause to the high-pitched, triumphalist accounts of electoral victories elaborated by Shri Shah.