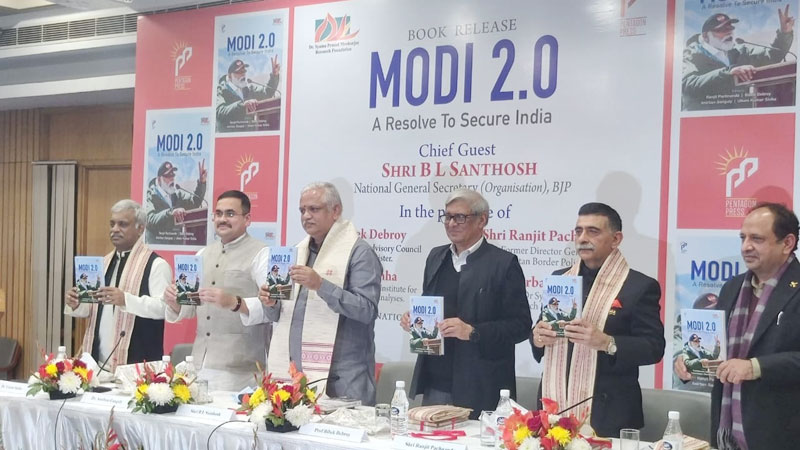 BJP National General Secretary (Organisation) Shri BL Santhosh launched a book ‘Modi 2.0 A Resolve to Secure India’ at India International Centre in New Delhi on 02 December, 2021. Dr Syama Prasad Mookerjee Research Foundation in collaboration with Pentagon Press has published this latest volume on how Modi Government is ushering in a new vision of national security and has comprehensively transformed it.

At the book launch Shri BL Santhosh said what adds value to this book is the immense accomplishment of the contributors and editors. In modern times the sense of assurance was diminishing, these 7 years have brought that sense of assurance in the leader and the system. The potential that was not realized in 70-75 years has been unleashed in 7 years of Modi government.

“Today I am reminded by the words of our PM Shri Narendra Modi- “I don’t know what I can achieve or deliver in the next 5 years, because achievement requires support and effort of many people. But I can assure you that I will work in a way that none of you will have to bend your head while asking for votes next time”. PM Shri Modi made us proud said Shri Santhosh.

Prof. Bibek Debroy said, “A sound and aggressive defence strategy is an absolutely necessary part of India’s reform agenda. Strategies to counter insurgency on our national borders and police reform are essential for maintaining the momentum in development.”

Shri Ranjit Panchanda said, “The Modi Government believes in keeping every citizen, who is an equal stakeholder in national security, secure from all kinds of threats, both external and internal.”

Dr. Anirban Ganguly said, under the Modi Government “India aspires to emerge as a leading power standing on solid foundation of a new security vision.”