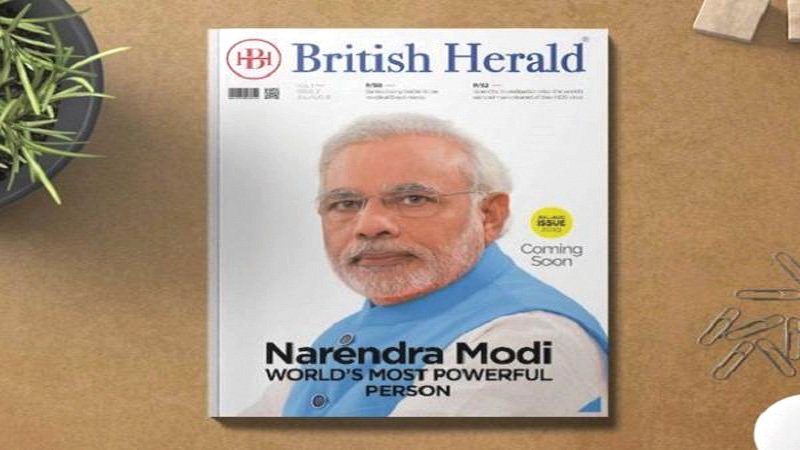 Prime Minister Shri Narendra Modi beat Russian President Mr. Vladimir Putin, Chinese President Mr. Xi Jinping and US President Mr. Donald Trump to emerge as the ‘World’s Most Powerful Person 2019’ in the reader’s poll conducted by UK-based British Herald magazine. PM Shri Modi will be featured on the cover page of the July 15 edition of the magazine which earlier featured New Zealand’s PM Jacinda Ardern in the May-June issue and Putin in its March-April issue.

“More than 25 world icons were in the nomination list and a judging panel of experts named four final candidates for the prestigious title,” the British Herald magazine wrote in an article. “Unlike regular voting system, the British Herald readers had to vote through a mandatory one-time password (OTP) process to validate their vote. Surprisingly, while the voting was on, our website crashed as many voters were trying to vote for their preferred leaders, generating about three million hits in a week,” the magazine said.

The poll which closed on 22 June, 2019 declared PM Modi to be the winner with 30.9% of the votes ahead of Putin (29.9%), Xi (21.9%) and Trump at 18.1%.
Interestingly, the website crashed during the voting due to overwhelming traffic as netizens rushed to the website to vote for their favourite leader. The website got as many as 3 million hits during the poll. The voting page on the magazine’s website received 2.5 million hits in the first week of June.

Modi raised his profile as a world leader in recent years. He has emerged as a key figure in the Asian region who is seen active with his act east policy. His effort to tackle climate change has been seen positively by the world, as warming affects millions of his country’s rural citizens,” the British Herald wrote in the article declaring Modi as the winner of the poll.