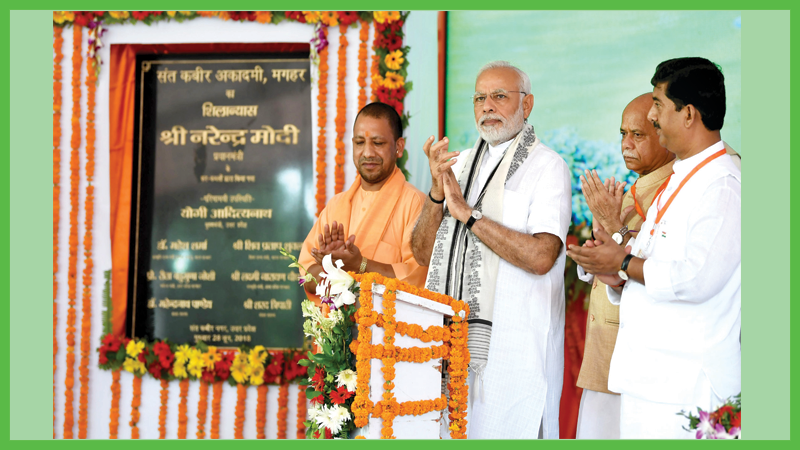 He offered floral tributes at Sant Kabir Samadhi, on the occasion of the 500th death anniversary of the great saint and poet, Kabir. He also offered Chadar at Sant Kabir Mazaar. He visited the Sant Kabir Cave, and unveiled a plaque to mark the laying of Foundation Stone of Sant Kabir Academy, which will highlight the great saint’s teachings and thought.

At a public meeting, the Prime Minister said that a wish which he had for years, had been fulfilled, by paying homage to the great saint Kabir, at the hallowed land of Maghar, where legend says that Sant Kabir, Guru Nanak and Baba Gorakhnath, had engaged in spiritual discussion.

The Prime Minister said that Sant Kabir Academy, to be built at a cost of about Rs. 24 crore, would create an institution to preserve the legacy of Sant Kabir, as well as regional dialects and folk arts of Uttar Pradesh.

The Prime Minister said that Sant Kabir represents the essence of India’s soul. He broke the barriers of caste, and spoke the language of the ordinary, rural Indian, Shri Narendra Modi added.

Making a strong statement against political opportunism, the Prime Minister recalled Sant Kabir’s teaching that the ideal ruler is one who understands the feelings and suffering of the people. He said Sant Kabir had criticized all social structures which discriminated among people. In this context, the Prime Minister mentioned the various schemes of the Union Government which seek to empower the poor and under privileged sections of society, such as Jan Dhan Yojana, Ujjwala Yojana, insurance schemes, toilet construction, and direct benefits transfer. He also mentioned the increase in pace in various infrastructure sectors such as roads, railways, optical fibre network etc. He said the Union Government is working to ensure that all parts of India receive the fruits of development.

He hoped that the teachings of Sant Kabir would help us give shape to the vision of New India.