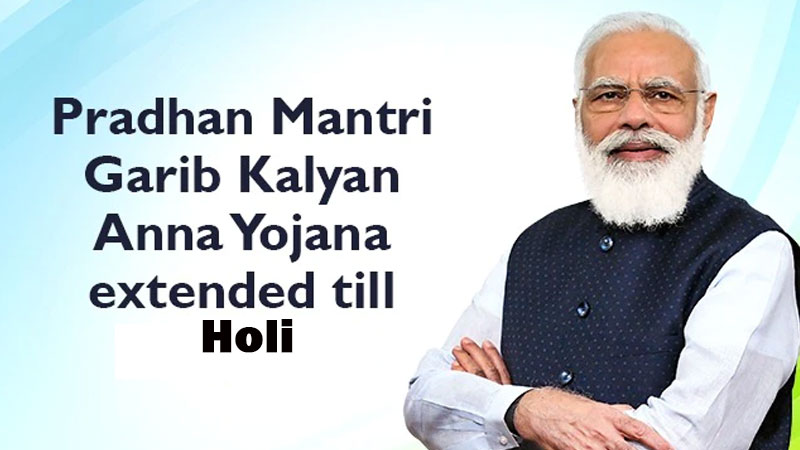 Programme ensures no one sleeps hungry in the country

Pradhan Mantri Garib Kalyan Anna Yojana (PM-GKAY), considered as world’s largest food security scheme, has ensured availability of sufficient food for the poor and needy during the COVID-19 pandemic. In the wake of nationwide lockdown caused by the unprecedented outbreak of COVID-19, the Government of India in March 2020 had announced the distribution of additional free-of-cost food grains to about 80 Crore beneficiaries, over and above the regular monthly NFSA food grains i.e., regular entitlements of their ration cards, so that the poor, needy and the vulnerable households do not suffer on account of non-availability of adequate food grains during the extreme challenges of lockdown and economic disruption.

PM Shri Narendra Modi is known for his vision, innovation and path breaking ideas to deal with challenging situations with a human touch. This he proved once again by launching the PM-GKAY scheme in the very initial stage of COVID-19 pandemic to save the poor and vulnerable, as part of Aatmanirbhar Bharat scheme. Under this scheme, 5 kgs of free rice/wheat and 1 kg of free pulse was provided to each person per month. As per reports, the PM-GKAY scheme supported around 81.35 crore needy and poorest people of India during the pandemic.

The scheme was initially launched by Prime Minister Shri Modi as part of the existing ‘Pradhan Mantri Garib Kalyan Yojana’ and it was approved for the period of April to June 2020, with a cost of Rs. 1.70 lakh crore

The country today is marching ahead with Modi government’s basic mantra of ‘Sabka Saath, Sabka Vikas, Sabka Vishwas and Sabka Prayas’ guided by the principle of Antyodaya or upliftment of the last men as the basic spirit of governance. Justifying this principle, the government included families belonging to the Below Poverty Line- Antyodaya Anna Yojana and Priority Households categories, households headed by widows or terminally ill persons, disabled persons or persons aged 60 years or with no assured means of subsistence or societal support, as beneficiaries of the scheme. All primitive tribal households, landless agriculture labourers, marginal farmers, rural artisans and persons earning their livelihood on daily basis in the informal sector were also included in the scheme.

The scheme was initially launched by Prime Minister Shri Modi as part of the existing ‘Pradhan Mantri Garib Kalyan Yojana’ and it was approved for the period of April to June 2020, with a cost of Rs. 1.70 lakh crore to the exchequer. By the end of May 2020, the coverage under the welfare scheme was highly impressive and the food ministry estimated that the program had reached 740 million beneficiaries and it has ensured wider food security in the country.

Enthused by the success of this scheme, PM Shri Modi extended this scheme upto November 2020, which, according to government estimates, benefitted over 800 million beneficiaries and incurred an additional expenditure of Rs. 90,000 crore for its extension.

Most recently the Prime Minister announced the extension of PM-GKAY scheme for Phase-V from December 2021 to March 2022, with an additional food subsidy of Rs. 53344.52 Crore. The total outgo in terms of food-grains for PMGKAY Phase-V is likely to be about 163 LMT. Going by the experience of earlier phases, the performance of PMGKAY-V is also expected to be on the same high level as achieved before. Overall, the government will be incurring an expenditure of nearly Rs.2.60 lakh Crore in PM-GKAY Phase I to V.

PM Shri Modi’s efforts to take everyone along through Garib Kalyan Anna Yojana, keeping human sensibility and sensitivity as paramount, has certainly given a lot of strength to the poor, needy, small farmers and small businessmen

Modi government has emphasized that benefits of these welfare schemes should reach everyone in need and until the end of the crisis. So, India is perhaps the only country in the world that provides free food grains for 24 months to 80 crore people without any discrimination. Owing to this noble vision and its tremendous outcome, the whole world has acknowledged the benefits of ‘Pradhan Mantri Garib Kalyan Anna Yojana’.

Appreciating the scheme, the WHO Director-General said, “PM Modi has addressed not only the health issues, but also economic issues and that should be replicated by other countries.”

Applauding the near universal PM-GKAY scheme, UN Secretary General said, “India has taken two steps-Pradhan Mantri Garib Kalyan Anna Yojana and AtmaNirbhar Bharat–which are taking care of the economic issues of the country and it is appreciable.”

Undoubtedly, the COVID-19 pandemic was and continues to be a major crisis faced by the entire world during the last century, that did not spare even the most advanced countries of the world. Past experiences show, whenever a major tragedy strikes such a massive population, it leads to instability in the society. However, under the dynamic leadership of PM Shri Modi, what India did for the safety of its citizens proved all the apprehensions wrong. Even in such difficult times, India tried to ensure that not a single poor person should stay hungry. Additionally, India also provided financial assistance to the poor, helpless, elderly people directly to their bank accounts during the pandemic. The facility of ‘One Nation One Ration Card’ was started for migrant workers to ensure their food security regardless of where they lived in the country.

PM Shri Modi’s efforts to take everyone along through Garib Kalyan Anna Yojana, keeping human sensibility and sensitivity as paramount, has certainly given a lot of strength to the poor, needy, small farmers and small businessmen of the country during these difficult times. This free ration distributed over the past two years has definitely reduced distress for the poor and supported their lives and livelihood. This new found confidence of an entire population is the cornerstone of PM Shri Modi’s governance that propels the grand vision of a “New India”, an India that is more resolute and self-confident to face global challenges, than ever before.