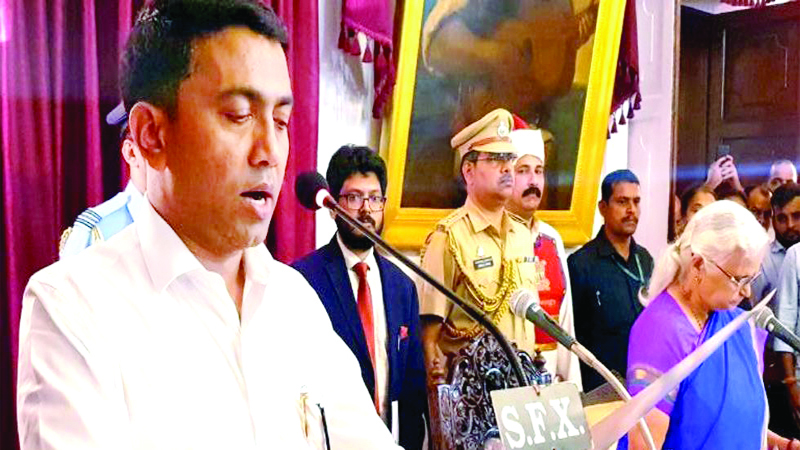 Shri Pramod Sawant, 45, was sworn in as Goa Chief Minister at 2 am on 18 March, 2019 as the nation mourned his predecessor Shri Manohar Parrikar’s demise.

Shri Pramod Sawant took oath along with ministers in his 12-member cabinet that included two deputies.

Wishing him, Prime Minister Shri Narendra Modi said in a tweet: “Best wishes to Dr. Pramod Sawant and his team as they begin their journey towards fulfilling the dreams of the people of Goa. I am sure they will build on the work done in the last few years and boost Goa’s growth trajectory.”

BJP National President Shri Amit Shah said in a tweet, “Greetings to the newly sworn-in Chief Minister of Goa, Dr Pramod Sawant and his team. I am sure that this new leadership will continue to serve the people of Goa with the same dedication and commitment. My best wishes”.

CM Shri Pramod Sawant led BJP coalition government won the vote of confidence on the floor of the House during a specially convened session of the Goa State legislative Assembly on 18 March, 2019. While the government got 20 votes, the Opposition got 15 in the 36-member truncated House of 40. Deputy Speaker Michael Lobo was in the chair as Speaker Shri Sawant had resigned to take over as the Chief Minister of the State.

Former Minister Pandurang Madkaikar, who had suffered a paralytic stroke, attended a special session and was allowed by the Speaker to raise his hand during voting by sitting in his place. Four seats are vacant at the moment — two following the resignations of two Congress MLAs to join BJP in October last year, and two due to deaths of former Deputy Chief Minister Francis D’Souza last month and Chief Minister Shri Manohar Parrikar. Both of them succumbed to cancer.

The motion to condole Shri Parrikar’s demise was moved by BJP MLA Rajesh Patnekar along with the deaths of former Deputy Speaker Vishnu Wagh and former Deputy Chief Minister and MLA Francis D’Souza. “I am sitting here only because of Shri Manohar Parrikar. I became an MLA, Speaker and now Chief Minister because of him,” said Shri Sawant in a choked voice. Overcome by emotion, he paused his speech on several occasions.

Speaking on behalf of the BJP legislative party, Cabinet Minister Shri Mauvin Godinho said that the late Chief Minister was a colossal and larger-than-life personality. “Difficult to get another Manohar Parrikar in this State, who build a modern Goa and took the State forward in every aspect of government. He is our pride and the State’s tallest leader who served as Defence Minister and conducted the iconic surgical strikes,” Shri Godinho said, adding, “His presence was felt in every decision of the State and he impacted life of people of Goa due to his vision.”