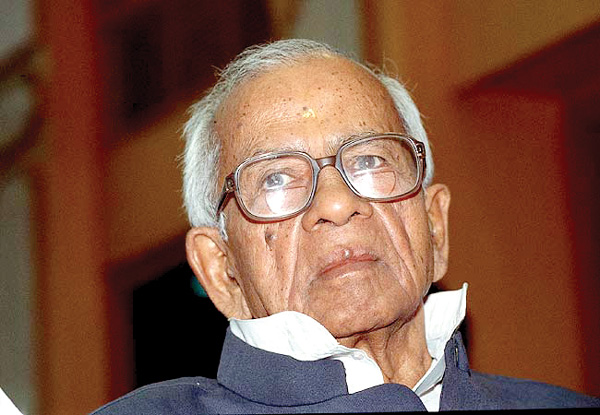 Shri Kailashpati Mishra (05 October, 1923 – 03 November, 2012) was a great social servant and political leader. He was leader of the BJP and a former Governor of Gujarat and Rajasthan. He was born in Dudharchak, Buxar, Bihar on 05 October, 1923. He was a bachelor and popularly called the “Bhishmapitamah” of Bihar BJP. In the political circle people also called Shri Kailashpati Mishra as ‘Rajniti ke Ajatshatru’. Shri Kailashji always maintained a cordial relation even with the leaders of other parties.

He was affiliated with the Rashtriya Swayamsevak Sangh (RSS) from 1944 onwards, and was even jailed after the assassination of Mahatma Gandhi. He took part in the Quit India Movement in 1942 and was arrested for the same and was associated with the Rashtriya Swayamsevak Sangh from 1943. He won the Assembly election for Bikram, Patna, and was Finance Minister in Bihar Government led by Janata Party. Shri Mishra was appointed Bihar’s Finance Minister in 1977-78 when the Janata Party government was in power.

-Shri Mishra had served as finance minister in the government of Karpoori Thakur in Bihar in 1977. In 1980, he became the first Bihar BJP President.

-While studying in class X, Shri Mishra was arrested for picketing at the main gate of his school at Buxar in support of 1942 Quit India Movement.