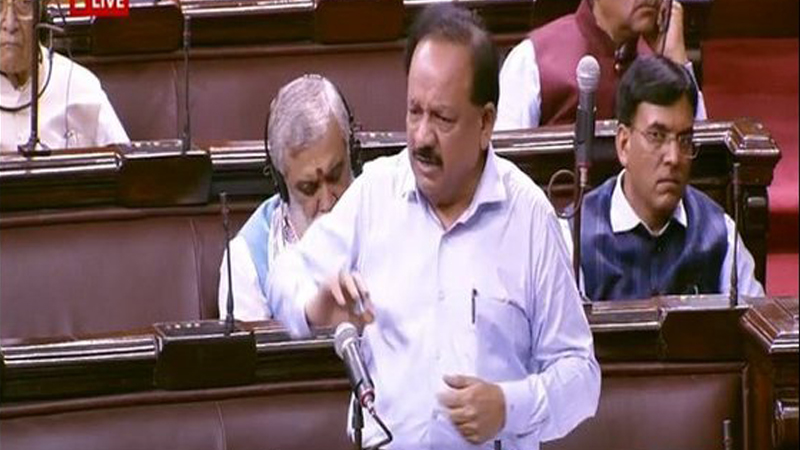 The Rajya Sabha has passed the National Medical Commission Bill, 2019 with few amendments. The bill will be again sent to the Lok Sabha for approval.

The bill will also ensure availability of adequate and high-quality medical professionals in all parts of the country besides promoting equitable and universal healthcare.

It has provision to sets up the National Medical Commission (NMC) which will frame policies for regulating medical institutions and medical professionals and assess the requirements of healthcare-related human resources and infrastructure.

The Commission will also make guidelines for determination of fees for up to 50 percent of the seats in private medical institutions and deemed universities. Besides, the legislation seeks to set up a Medical Advisory Council by the Centre that will advise the NMC on maintaining minimum standards of medical education.

Replying to a debate on the bill in the Rajya Sabha, Health Minister Dr Harsh Vardhan said, the legislation will bring major reform in the medical education in the country.

He assured the members that government will also put a cap on the fee on the fifty per cent of those seats in private medical colleges which are not regulated by NMC. He also said that officials and staff of Medical Council of India will be adequately compensated.

Earlier, moving the Bill, Health Minister Dr Harsh Vardhan termed the legislation as a biggest reform in the field of medical education. He said the corruption in Medical Council of India is well known and there have been many reports of involvement of MCI officials in corrupt practices.

He said under this scenario the idea of National Medical Commission was mooted. Referring to apprehensions of Indian Medical Association and doctors over the bill, Dr Harsh Vardhan assured them that he will be the last person who will not uphold the dignity of medical profession.