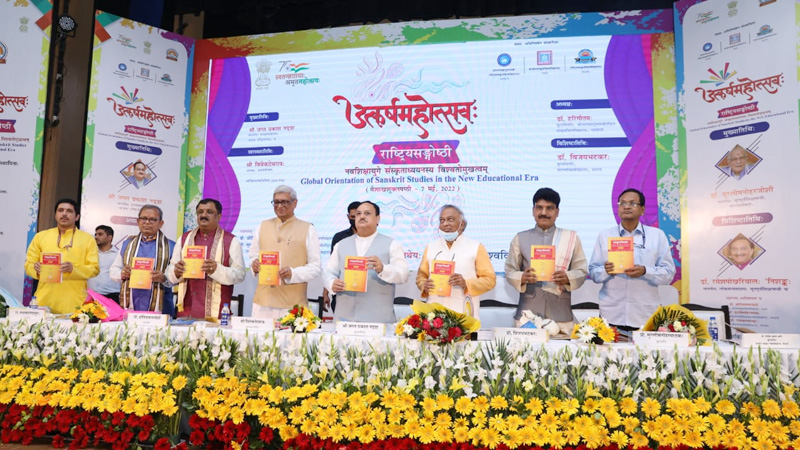 BJP National President Shri Jagat Prakash Nadda inaugurated three-day Utkarsh Mahotsav of the central Sanskrit University at Dr. Ambedkar international centre, New Delhi on 07 May, 2022. Addressing the gathering on the occasion Shri JP Nadda said where there is Sanskrit, there is culture and ideology. Sanskrit is ‘DEV BHASHA’; it is also ‘AMRIT VANI’. Sanskrit is the medium to take us from darkness to light.

He said under the leadership of Prime Minister Shri Narendra Modi the Bharatiya Janata Party is highly committed to preserve and promote our ancient culture and great philosophy of India. The Narendra Modi Government will leave no stone unturned in promotion and preservation of our great language Sanskrit.

Tolerance, to hear out other people’s views, the quest for truth and to give space to everyone — these are the real face of our culture. PM Shri Modi always emphasised and highlighted the importance and significance of Sanskrit from every stage in India and abroad. When the intentions are clear and good, the policy is also clear and transparent and it is the people who implement these policies and programmes on the ground, Shri Nadda said.

Shri Nadda said after becoming Prime Minister Shri Narendra Modi implemented two very important policies -National Education Policy and National Health Policy. Both the policies were crafted keeping in mind the needs of our country, both the important policies are deeply rooted in our culture and tradition. Special efforts have been made to promote Sanskrit through these two important policies.

He said the current period is the best period for Sanskrit, its promotion and preservation. Sanskrit always gets the same importance and its progress is the responsibility of all citizens of the country. India today is recognized and lauded globally for its spiritualism, yoga, culture and humanism. Now we are global leaders in these fields, Shri Nadda added.