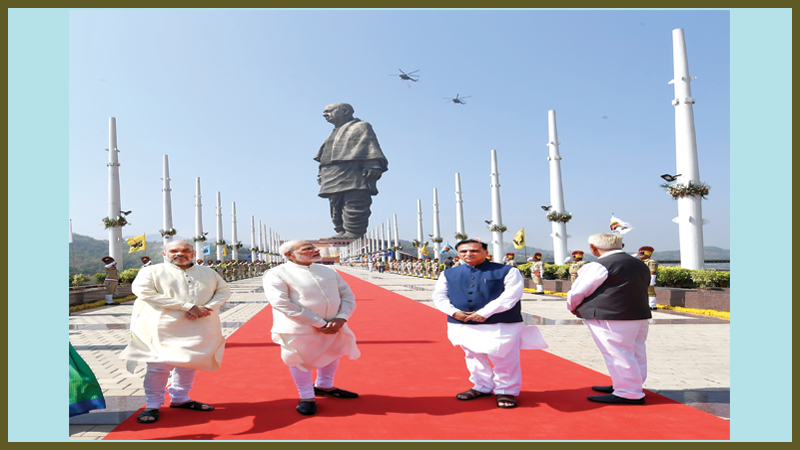 The real tribute to Sardar Patel would be to resolve to contribute in the making of a New India inspired by the spirit of unification made possible by Sardar Patel.

History has often proved that every crisis would find its own man. India had its crisis man in Sardar Patel in the aftermath of our country’s Independence, when a great crisis was staring at the still-to-be-born India. Rulers of about 600 principalities were nursing their own ambitions of becoming independent leaders. Some of them were even thinking of associating themselves with the new-born neighbouring country. Nizam of Hyderabad, right in the centre of our country, was one among them. Such a crisis needed a man with a mind of steel and a great vision. We were indeed fortunate to have found one in Sardar Patel.

To understand the significance of Sardar Patel’s vision and his contribution to the unification of our country, one only needs to imagine a situation in Hyderabad, which had toyed with the idea of joining Pakistan, not being a part of India. But for this great son of our country, Sardar Vallabhbhai Patel, it is indeed difficult to visualise India of today. One geographical entity of today’s India is legacy of Sardar Patel. But has our country done justice to his contributions and legacy ?

This is the objective of our Government’s decision to observe Sardar Patel’s birth anniversary as ‘Rashtriya Ekta Diwas’. This is not intended to belittle other legacies and contributions of other leaders. Pure and simple, our intention is just to do justice to the words and deeds of Sardar Patel.

Sardar Vallabhbhai Patel was born on October 31, 1875 in Gujarat. He was born into a farmer’s family. In the due course, he passed his matriculation examination and after some years, he passed the Law examination. He practiced as a lawyer at Godhra. He carried on a roaring legal practice. As he was ambitious, he went to England and became a barister-at-law.

In 1923, he became the leader of Bardoli Satyagraha. Since then, he came to be called Sardar Patel. His elder brother, Mr Vithalbhai Patel, was the President of the Indian Legislative Assembly. He was jailed several times in connection with the freedom movement. He was the right-hand man of Mahatma Gandhi and his most trusted lieutenant. It was Patel who maintained discipline in the Congress ranks. In 1936, the Congress at the General Election won the majority of seats in seven provinces of British India.

Sardar Patel was the most important member of the Central Parliamentary Board. He became free India’s first Deputy Prime Minister, Pandit Jawaharlal Nehru being the first Prime Minister. He was in charge of the Home Department and administered law and order.

Future historians will marvel at his organising capacity and superhuman ability. The integration of about 560 Princely States and the elimination of the autocratic rule of the Maharajas and Nawabs will ever stand out as his unique and greatest achievement. He did it without bloodshed and in a short span of two years. Was this not a miracle? To him, rightly goes the credit of completely changing the map of India.

He was essentially a man of action. He was India’s man of destiny. He was the Iron man of India. He was the brightest luminary on the home front. He was a walking volcano with fires raging in his heart. He was not a man to be ignored or trifled with. Defeat, he never knew; weakness he never felt, and indiscipline he never tolerated. He was a pillar of fire and enthusiasm, but as a practical statesman, he was also calm and unfathomable. He never hesitated to take a decisive step. He combined quickness of decision with resourcefulness.

He was the greatest administrator and the best statesman that India ever produced. His death on December 15, 1950, left India poorer. By his death, free India has suffered a loss in political leadership that is difficult to repair. Crores of our countrymen, including myself, still believe today that Sardar Patel had been the first Prime Minister of our country, the course of events would have been totally different. We as a nation need to correct this distortion. Our Prime Minister Narendra Modi made it clear that we need to look beyond politics, to build an India that lives up to its potential.

Without the creation of the India of today, we would have had no voice in the global order of things. That is why we need to commemorate the legacy and memory of Sardar Patel, and that is what we are doing today.
Sardar Patel symbolised a decisive leadership. In the past and in recent times, we have paid heavily for the indecisiveness of leaders, in whose hands our destinies have been placed. Today’s India needs another Sardar, who can think with clarity and act firmly. We are fortunate to have another leader with such traits in Narendra Modi.

Located alongside the Narmada River in Gujarat, the world’s tallest ‘Statue of Unity’ that is being unveiled today is a real tribute to the Ironman of India. Nearly 30 metres taller than the current record holder — the Spring Temple Buddha in China — and almost double the height of the Statue of Liberty, the statue of unity is “a symbol of India rising”, as rightly pointed by our Prime Minister.

Besides unifying the country, Sardar Patel had also laid the foundations of all-India services as a permanent executive and a vehicle of building modern India. On this day, we need to resolve to contribute to the making of a new India inspired by the spirit of unification made possible by Sardar Patel.

Whatever had happened had happened and it is time for every countryman to strive for the unity, integrity, safety and security of our country, inspired by the spirit and vision of Sardar Patel. We do have some issues relating to external and internal security of our country. I am confident, unitedly, we can overcome these challenges under the leadership of our Prime Minister. Let us remember Sardar Patel, whenever we are confronted with a challenge. That shall enable us to meet it with resolve.

(The writer is Union Minister for Commerce & Industry and Civil Aviation)