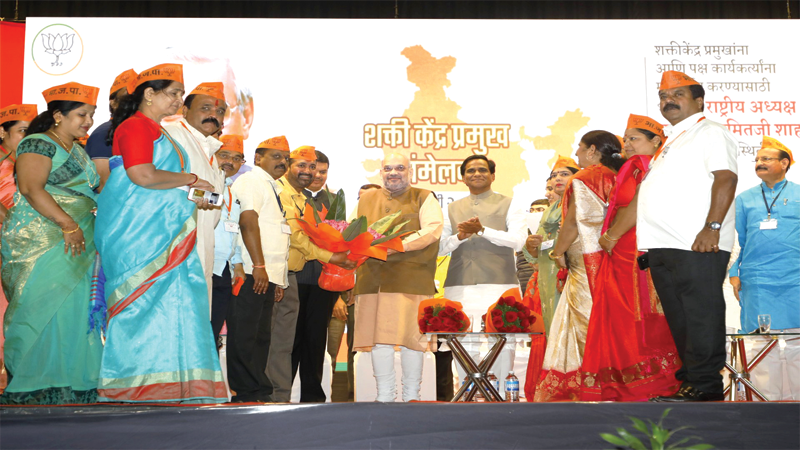 Making national security an issue for the forthcoming Lok Sabha polls, BJP National President Shri Amit Shah exhorted his party’s booth level workers to help the BJP-Sena alliance to win as many as 45 out of 48 seats in Maharashtra so that it could identify and throw each and every infiltrator settled across the country.

Slamming the various Opposition parties for showing undue concern about infiltrators settled in various parts of the country, Shri Shah said, “Let NCP or Rahulbaba’s party raise hue and cry or shed tears over infiltrators, I will guarantee you if give us 45 seats in Maharashtra, we will identify and throw out each and every infiltrator living across the country. We do not indulge in vote bank politics. For us, the security of Maa Bharati is our top priority”.

Speaking at a meeting of party workers and leaders from Pune, Shirur and Baramati Lok Sabha constituencies at Ganesh Kala Krida auditorium in Pune on 10 February 2019, Shri Shah said, “When I say this that this election will have a bearing on the future of the country, I know that these people (opposition parties) will not do this job. They see vote banks in infiltrators, while in infiltrators I see termites eating into the fabric of the country. That is the difference between the Opposition parties and the BJP,” he said.

Calling form a resolve among the party workers to ensure the return of the Narendra Modi government with a bigger majority than the one won in the 2014 Lok Sabha polls, he said that the BJP would not settle less 45 seats in the state and its aim was to win Baramati seat the home constituency of Sharad Pawars ji–in the 2019 polls.

“No one will accept our victory if our alliance wins less than 45 out of 48 seats in the state. The 45 seat winning tally is something that can be cherished only if the BJP wins the Baramati seat. You should not give any seat in Maharashtra for 15 years to those indulging in corruption and not give any seat for 10 years who have contributed to backwardness in the country. And no seat should be allowed to be won by those protecting infiltrators or weakening national security,” the BJP President said.

Shri Shah who addressed the booth-level party workers along with Chief Minister Shri Devendra Fadnavis and other senior leaders said if the “thugs” (the Opposition parties) came to power in 2019, the country would slide once again and the pace of development would be derailed.

He said that Prime Minister gave a new direction of development in the country since assuming power in 2014 and the 2019 polls would decide the future of the country. “What could not be achieved in 55 years has been achieved by Modiji in the past 55 months of our government… The BJP has all along laid stress on ‘Vikaas’. The latest budget has done justice to all sections of society”

Shri Shah said that during in the past five years, the BJP rule had wiped out the influence of ‘one family’, crushed casteist-communal type of politics, rid the country of corruption and has led the country on the path of fast-paced development.

Castigating the Mahaghathbhandan for various fronts, Shri Shah said that no party or alliance could stop the BJP’s victory chariot in the 2019 elections since it was proceeding with corruption-free development agenda.