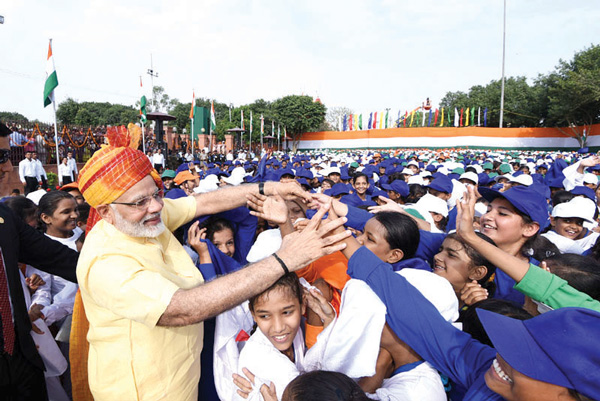 Prime Minister Shri Narendra Modi addressed the nation from the ramparts of the Red Fort on the 71st Independence Day- August, 15, 2017.Here,we are publishing highlights of the speech for our esteemed readers:

Nation is celebrating the Independence Day with the festival of Janamashtmi today . I can see a number of Bal Kanahiyas here. We are fortunate to have in our cultural and historical heritage from a Sudarshan Chakradhari Mohan to Charkhadhari Mohan.

This year we are also commemorating the centenary of Champaran Satyagrah and the Sabarmati Ashram. The centenary of Lokmanya Tilak’s call “Swaraj is my birth right” falls this year as well.

We are aware of the power of the collective resolve, hard work, sacrifice and devotion of our 125 crore citizens. Lord Krishna was immensely powerful, but it is only when the milkmen came out with sticks in his support that they could lift the Govardhan parvat. When Lord Rama had to go to Lanka, the monkeys of vanar sena came to his help, Ramsetu was built and Lord Rama could reach Lanka. Then there was Mohandas Karamchand Gandhi, who empowered his countrymen to weave the fabric of independence with cotton and spinning wheel. The collective resolve and strength of the people got freedom for our country. No one is small or big. We have in our memory the story of squirrel which became an agent of change. That’s why we must remember that no one among the 125 crore people is either small or big – everyone is equal.

We have to leave this ‘Chalta Hai’ attitude. We have to think of ‘Badal Sakta Hai’- this attitude will help us as a nation.

The ‘One Rank – One Pension’ policy for our defence forces was stuck up for 30-40 years. Our government implemented it.

New systems are emerging. Today roads are being built at twice the speed. The railway tracks are being laid at double the speed. More than 14 thousand villages that were hitherto shrouded in darkness even after Independence, have been provided with electricity. Bank accounts of 29 crore people have been opened, more than 9 crore farmers have got Soil Health Card. More than 2 crore poor mothers and sisters are no longer using the fuel wood and using LPG gas stove now. The poor tribals have gained faith in the system. The person at the last mile of development now joins the mainstream and the nation is marching ahead.

India today has gained in stature across the globe. You will be happy to know that we are not alone in our fight against terrorism. Many nations are proactively supporting us.

For the development and progress of Jammu & Kashmir, its prosperity, and fulfilment of the aspirations of the citizens, not only the J&K government, but we as responsible citizens also have a responsibility. We are committed to restore the state to its former glory so as to experience the paradise that it was, once again.

We shall take strict steps against terrorism. There is no question of being soft on terrorism or terrorists. We have been asking the extremists to join the mainstream.

I deeply appreciate the efforts of security forces in curbing the Left Wing extremism which mobilized a lot of youth from these regions to surrender and joined the mainstream.

I review Government Projects every month. A specific project came to my notice. It was a 42-year old project. 70-72 kilometres of Railway lines were to be laid, but the project was lying in limbo for the last 42 years.

If each one of us, irrespective of where he belongs to, strives with a new resolve, a new energy, a new strength, we can change the face of the country with our combined strength in the 75th year of our independence in 2022. It will be the New India – a secure, prosperous and strong nation. A New India where there is equal opportunity for all; where modern science and technology play an important role in bringing glory for the nation in the global arena.

In the New India, the biggest strength is democracy. But we have reduced our democracy to mere ballot boxes. However, democracy cannot be confined only to ballot boxes. Hence our resolve is to see to it that we have a democracy in New India, where people are not driven by the system, rather the system is driven by the people. Such a democracy should become the identity of New India and we want to move towards that direction.
Lal Bahadur Shastri had given the slogan “Jai Jawan Jai Kisan.” Our farmers have not looked back since then. They are now producing record harvests and scaling new heights despite facing natural adversities. There has been a record production of pulses this year.

India never had the tradition to import pulses and if it had to import on rare occasions, it was only a few thousand tons. This year when they produced 16 lakh tons of pulses to provide nutrition to the poor, the government took the historic step of encouraging them by buying their produce.
Pradhan Mantri Fasal Bima Yojna has provided a security cover to our farmers. Three years back, this scheme which was running under a different name earlier, covered only 3.25 crore farmers.

Pradhan Mantri Krishi Sinchai Yojna aims to meet the demand of water of the farmers. If my farmers get water, they can produce rich harvests from their fields.

With the changes in demand and technology, the nature of jobs in our country has been changing. The Government has launched several new initiatives in the employment related schemes and also in the manner in which the training is imparted for the development of human resource according to the needs of the 21st century. We have launched a massive program to provide collateral free loans to the youth. Our youth should become independent, he should get the employment, he should become the provider of employment. Over the past three years, ‘Pradhanmantri Mudra Yojana’ has led to millions and millions of youth becoming self-dependent. It’s not just that, one youth is providing employment to one, two or three more people.

Over the last three years, we have set up 6 IITs, 7 new IIMs and 8 new IIITs and we have also done the groundwork for linking the education with job opportunities.

Our mothers and sisters are an integral unit of our families. Their contribution in making our future is extremely important. And that is why we have decided to increase the paid maternity leave to 26 weeks from the earlier 12 weeks.

Making India corruption-free is an important task and we are trying to provide impetus to it. Demonetization followed this move. We have achieved several milestones through demonetization. The hidden black money has been brought into the formal economy. You must have seen that we used to extend the days from 7 days to 10 days to 15 days; sometimes we allowed the old notes at the petrol pump, at the chemist shops, and sometimes at the railway stations, because our intention was to bring all money into the formal banking system and we achieved success in completing the task. According to the research conducted by outside experts, about Rs.3 lakh crores that had never come into the banking system before, has been brought into the system after the demonetization.

We have taken several steps and I am sure that post GST, it will increase further and bring in transparency. Today a truck driver on an average is able to save 30% of his travel time from one point to another after GST was introduced.

Cheap medicines through Jan Aushadhi Kendras are a boon to the poor. There used to be a lot of expenditure on operations and stents. We are striving to make it possible for knee operations as well. We are striving to minimize this expenditure for the poor and the middle class.
We asserted our supremacy in the world by introducing Tejas aircraft. BHIM Aadhaar App for digital transaction has come as a surprise to the world. Crores of RuPay Cards are now available in the country. When all the cards will be operational, it will be the largest number of cards in the world.
I shall urge you to take up the New India Pledge and move ahead. Our scriptures say, “अनियत काल:, अनियत कालः प्रभुत्यो विपलवन्ते, प्रभुत्यो विपलवन्ते”. It implies that, if we don’t accomplish a work within the stipulated time then we shall not be able to get the desired results. So for the ‘Team India’, for the 125 crore countrymen, we have to take the pledge to achieve the goal by 2022.