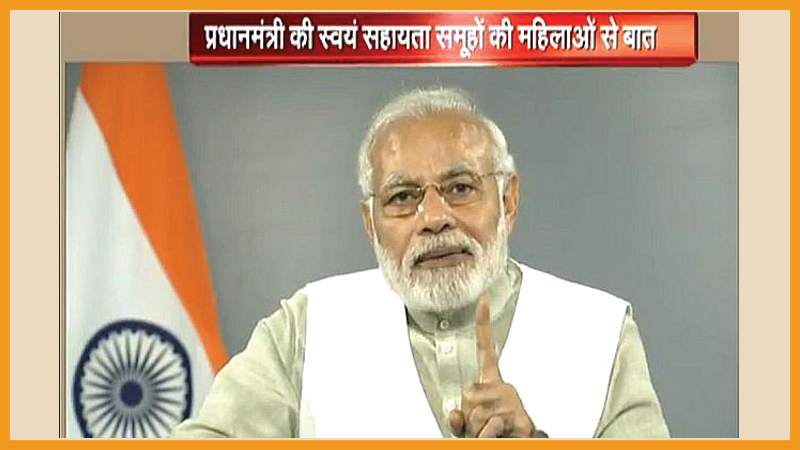 The Prime Minister, Shri Narendra Modi on July 12 interacted with the members of Self Help Groups from across the country and beneficiaries of Deendayal Antyodaya Yojana, through video bridge. The interaction covered over one crore women representing various Self Help Groups. This is the ninth interaction in the series by the Prime Minister through video conference with the beneficiaries of various Government schemes.

Expressing happiness in interacting with women from Self Help Groups of various states, Prime Minister said that each member is an inspiring example of resolution, collective efforts and entrepreneurship. He said that women are enterprising, have enormous inner strength for self-reliance during odd circumstances, and they need only opportunities to perform. He added that it is impossible to imagine many sectors especially agriculture and diary, without the contribution of women. This is the true spirit of women empowerment all over the country.

Narendra Modi during the interaction said that Deendayal Antyodaya Yojana- National Rural Livelihood Mission has been started in all states. He added that the aim of the scheme is to reach crores of poor households in 2.5 lakh gram panchayats and provide them sustainable livelihood opportunities. He also congratulated all States and Officials in the successful implementation of the scheme.

Government is also providing training, financial assistance and opportunities to promote Self Help Groups throughout the country. Through Mahila Kisan Sashaktikaran Pariyojna, training has been given to over 33 lakh women farmers. At present there are 45 lakh Self Help Groups with active participation of around five crore women all over rural India.

Prime Minister said that special attention is given to skill development of rural youth through Deendayal Antyodaya Yojana. Training is given for employment as well as self-employment to meet the aspirations of youth for a better life. He added that about 28 lakh youth have been trained in skill development through 600 Rural Self-Employment Training Institute and around 19 lakh have been employed.

During the interaction, Prime Minister talked about the importance of value addition and value chain approach. He urged the Self Help Groups to register in the Government e-Market Place (GeM) to sell their produce.

Interacting with the Prime Minister, the members shared their experiences and success stories associated with Self Help Groups. Prime Minister appreciated how poor women with their self-confidence and strength fought against all adversities. Women beneficiaries also explained how Self Help Groups have ushered in a positive change in their lives. Prime Minister asked the beneficiaries to send their success stories with photos along with their ideas through Narendra Modi App.