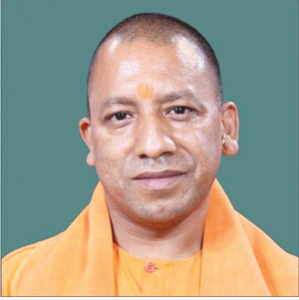 It means that it goes without any doubt that an intelligent and patient leader leads the country to dizzying heights of progress.

If you can imagine the tangible form of the spirit behind these words, these are perfectly reflected in the persona of Hon’ble Prime Minister Shri Narendra Modi Ji. Filled with unflinching love for the country, the uncompromised dedication and sense of reverence for women, mother and motherland, unconditional respect towards the public opinion, PM Modi Ji has navigated the country to the pinnacle of glory by the dint of his vision, thought-process and steely resolve. He unshackled the country from the stagnation of backwardness which it had to face for 70 years and now the entire World is tempted to look at India as ‘One India- Best India’ (EkBharat-Shreshth Bharat).

“जननी जन्मभूमिश्च स्वर्गादपि गरीयसी”। (Both the mother and the motherland are better than heaven). The philosophy of this golden saying has been imbibed by Modi ji in totality. He discharged his duties towards both with the purity and sincerity. ‘Beti Padhao- Beti Bachao’ has been one scheme through which he did a yeoman work to ensure security and self-esteem of the daughters while seeking to make them socially and financially independent and self-reliant. A lot of lip service was done in the name of women power before 2014 but it was the vision of PM Modi that it was seen in reality. Not only he protected the sanctity of the womanhood, he immediately picked up the issue of school dropping rate among the girls and made sure they are educated and skilled enough to protect their self-respect.

The ‘PM Ujjawala Scheme’ saved the home maker women from various carbon-induced diseases beside instilling in them, a feeling of social pride. Apart from this, he formulated several schemes like PM Dhanlakshmi Scheme, Free Sewing Scheme, Girl Assistance Scheme, Vidya Lakshmi Education Loan Scheme and PM Matravandana Scheme which helped turn women folks into as skilled, competitive, self-reliant and powerful lot and identify women power as complementary to power of the nation.
Even before the Independence, the leaders kept on talking about last man in the last line but even after 70 years of freedom, no leader could really improve the life of this last man. PM Modi brought it on the ground which made every Indian realise it. This last man considered himself as a part of this country and important component in the economy of the nation when for the first time he was given this opportunity by opening Jan Dhan accounts in the banks.

Even the greater task was to understand the ethos, mind-set and sentiments of the masses and and link them to the nationalism. This, indeed, was an example of translating power of the masses into nation building. It was a unique example of how the large conglomerate can think and act towards one goal i.e nation building. It was a unique journey from ‘Antodaya to Rashtrodaya’. It was fully realised when he was washing the feet of cleanliness workers, who are always considered as pariah in the society, during his visit to Prayag Mahakumbh thus breaking the shackles of inequality.

PM Modi is the true reflection of national policy in this era. His wisdom and statesmanship gives vibrancy to the entire nation. If we are being able to protect ourselves from the Corona pandemic it is basically because of what the Hon’ble Prime Minister inspired us to do 5-6 years ago. The Mantra of ‘cleanliness’ was launched by him as a mission on October 2, 2014 itself. It was his foresight that he laid solid foundation of Digital India in 2014 and now during the pandemic, the virtual platform proved to be the most useful from educational to administrative arrangements, medical health to spirituality. Truly, it was the magnanimity of the PM Modi JI who touched the chords of every Indian mind and tried to cater not only to their needs but their aspirations as well. At the time when he is completing 70-years of his age, he has already given us 70 pro-people schemes which are writing a new script of the progress, prosperity and growth of our beloved country.

India remained away from its original character largely because the academia of the nation was in the grip of two ideologies. This led to India losing prestige at global platforms and the world opinion dubbed India as a ‘soft state’. It was sheer resilience and iron resolve coupled with clear ideology and statesmanship through which he restored the lost glory and boosted the self-esteem of 135 crore Indians. The same United States which had once refused Visa to him, was witness to tumultuous welcome of our Prime Minister at Times Square thus experiencing the new emerged prowess of India. The same United States saw India a winner at ‘Howdy Modi’ Programme and witnessed to the President of the most powerful country walking step by step with the Indian Prime Minister. The Prime Minister Modi adopted the policy of ‘the neighbour first’ and accorded due respect to the neighbouring countries they deserved but denied for long. The innovative thought process of ‘Act East and Pivot to West’ bridled a bridge between east and west. With the result OIC , which once had refused to extend invitation to India under pressure of Pakistan, rolled out red carpet later. Many Arab countries, in fact, bestowed their highest civilian honour on our PM Modi which is testimony of the fact that he has been universally accepted pan-world leader. There is no single country in the world which does not want to have a connect with India and have its well-defined cooperation in this new World order which emerged after Modiji became the PM. The credit goes solely to the charismatic personality and amazing body of work of the Prime Minister Modi JI.

Ayodhya and Kashmir were two vexed issues which used to pinch the consciousness and emotions of all the Indians. As a matter of fact, Ayodhya was consigned to face the bane of slavery for the last 500 years. A lot of sacrifices were made to free the birthplace of Bhagwan Shri Ram. It was nothing short of like a ‘Rashtrayagya’ by the revered saints and yogis when the Prime Minister, on August 5 last, laid the foundation stone for the grand Ram Temple. Similarly, the Article 370, a big obstacle in the path of ‘One India- Best India’ also a sore point for Indian psyche for long. The firm resolve and unwavering political will of PM Modi saw fulfilling the commitment of Rashtranayak Shyama Prasad Mukherjee of ‘Ek Nishaan, Ek Vidhan, Ek Pradhan’ by doing away with it in Jammu and Kashmir.

The global pandemic of Corona has taken a heavy toll of many of the developed countries but the foresightedness, efficient planning and capability of taking hard decisions by the PM steered us to the safety with both the ‘Jaan’ and the ‘Jahan’ are intact.

Due to lack of pragmatic and innovative approach in the economy, India could not get rid of some traditional and regressive mind-set during long stretch of times since independence. It was for PM who ensured financial inclusion of the classes by introducing the scheme of Jan Dhan Accounts, strived hard to convert informal economy to formal economy through infusion of Digitalisation under Digital India and moulding India into a Technological Cooperative Federalism. GST regime has announced arrival of new era in the Indian Economy. The ‘One Nation One Tax’ concept has strengthened the economic chain of the country and gave a thrust to India to move towards being competitive, technological and skilled nation.

I find myself extremely blessed to have got an opportunity to work under our beloved PM Modi, a person with unmitigated righteousness, unquestionable sense of service towards mankind and overwhelming sensitivity. I Pray to Shri Ram that Modi Ji, an architect of ‘‘One India- Best India’ , continues to grace our lives for all times to come. The mantra of Antodaya is getting shaped in true sense now. The very best wishes to you on your birthday. We are ever grateful as your dedication, determination and vision inspires us to give our best. Wishing you a long, healthy and a glorious life.

(The writer is the Chief Minister of UP)