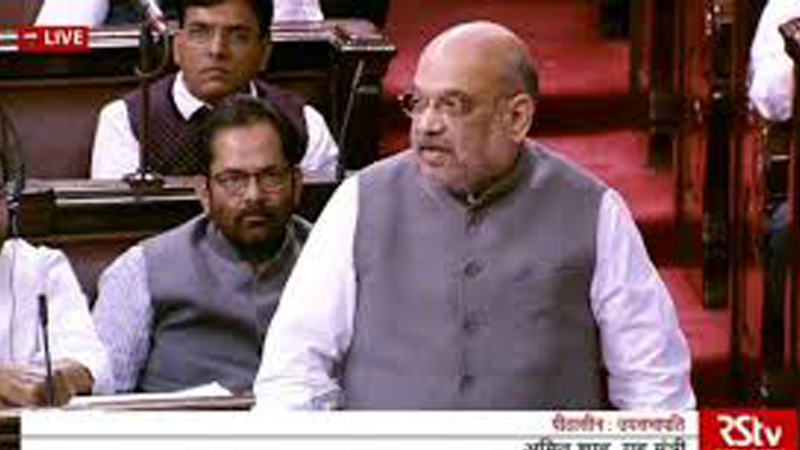 Rajya Sabha passed the Unlawful Activities (Prevention) Amendment Bill, 2019 today. Union Minister for Home Affairs, Shri Amit Shah, replying to the debate on the Bill, appealed to the House to pass the bill unanimously to send a strong message to the world that terrorists are the enemies of humanity and India is committed to finish terror from its soil.

The Home Minister said that those who are opposing this bill now must remember that the original law was not brought by the current Government. “We have always supported a strong law against terrorism and have been committed to any amendment in this direction, in the past also. A tough law is required to uproot terrorism from India and we would always support that.”

In addition to this, Shri Shah said that terrorism has no religion and individuals of one religion must not be victimized. He further assured the House that Government is committed to protect the fundamental rights of all citizens.

Shri Shah further added that terrorist acts are committed not by organizations but by individuals.
Declaring an organization as a terrorist organization will not stop the individuals behind it. Not designating individuals as terrorists, would give them an opportunity to circumvent the law and they would simply gather under a different name and keep up their terror activities.

The Minister said that only those individuals who participate in terrorist activities, aid those indulging in such activities, propagate the ideology of terrorism and members of known terrorist organizations will be declared as terrorists after this amendment is passed. He added that terrorism is a global problem and the UN along with several other countries, have provisions in their laws to designate individuals as terrorists.

The Amendment gives powers to DG, NIA to attach properties acquired from proceeds of terrorism. On this issue, Shri Shah said that this law does not take away powers of the state police. When NIA takes up a case having international and inter-state ramifications, all the facts pertinent to the case are with the NIA, and not with the state police. Currently, the law requires that NIA take prior permission from the respective state DGP to attach the proceeds of terrorism. This delays the process as often such properties are in different states, the Minister added.

Praising the NIA’s efficiency, the Minister said during the debate that the NIA’s conviction rate is 91%, which is exceptional by global standards.
Earlier, officers of ranks DSP and above were empowered to investigate cases under UAPA as per Section 43. The Amendment seeks to empower officers with the rank of inspectors and above to do the same. Commenting on the issue, Shri Shah said that this would help solve the human resource crunch in the NIA. The inspector rank officers have, over time, acquired sufficient proficiency to investigate UAPA related cases. Shri Shah added that this move would quicken the delivery of justice in UAPA related cases, which are reviewed by senior officers at various levels.