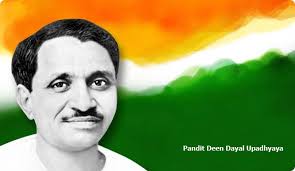 Whatever work he undertook, he immersed himself in it with single-mindeness. It was his inborn nature to perform every piece of work beautifully and perfectly. He was always first in his class or college or university, but never in his life did personal ambition raise its head.

THE life of Deendayal Upadhyaya illustrates the fact that an ordinary man can rise to extraordinary heights. He was born in a very poor family. But on account of his brilliant intellect and diligent application became an illustruous person. While he was a student in Agra College we used to live together. One day we went to the market to purchase vegetables. We bought them, paid the money to the vendor and were returning to our room. As we were nearing our room he discovered that a bad coin that was in his pocket for the past few days was missing. He felt worried that he might have paid the false coin to the vegetable vendor, though unknowingly. He said to me, “Let us go back. By mistake I have given a false coin to the vendor. Let us take it back and give her a genuine one in return.” When we went back to the vendor she was busy selling vegetables. When she was told about the false coin, she answered, “Let it go ; where can I search out your coin ?” But Deendayalji did not agree. From the small heap of coins he searched out the false coin and replaced it by a genuine one. Seeing this the vegetable vendor was struck with wonder. Deendayalji returned quite happy. Such was the intensity of his honesty,


Whatever work he undertook, he immersed himself in it with single-mindeness. It was his inborn nature to perform every piece of work beautifully and perfectly. He was always first in his class or college or university, but never in his life did personal ambition raise its head. Independence of the country and well-being of the society, these were his only ambitions. To these he dedicated his entire life. On the auspicious occasion of the country’s independence, he exclaimed, “Now a great responsibility has come upon our shoulders. We will have to make greater sacrifices and put in greater efforts for the reconstruction of the country than we did for its independence. Till now we had only to agitate. But now we have to mobilise the entire energy of our youth into constructive and creative channels. Then alone will our country become great and will we become worthy citizens of Bharat.”

Deendayalji was gifted with a manyfaceted personality. He was an extraordinarily successful organiser and had the knack of keeping people together. His role in the growth and development of the Rashtriya Swayarnsevak Sangh in Uttar Pradesh was very significant. In 1946 he entered the field of journalism. He successfully edited monthlies, weeklies, and dailies, thus giving proof of his competence as a journalist. At the same time he produced works of great literary merit and established himself as a Hindi writer of great eminence. Inspired by Dr. Shyama Prasad Mukherjee, he joined politics in 1951. To begin with, the field of his activity was Uttar Pradesh. But within the short span of one year he emerged as a political leader of all-India stature. Before long he came to be known as an original thinker and was counted among national leaders.

Integral Humanism is his contribution to Indian politics. According to the Western biologist Charles Darwin, the world is a battle-field where survival of the fittest is the prevailing law. Karl Marx, the materialist disciple of Hegel, described nature as dialectical and human society as one full of class struggles. Diving deep into these philosophies Deendayalji came to the conclusion that the Law of the Jungle cannot be the Dharma of nature as a whole, much less of human society. The truth is, the apparently hostile forces are in fact complernentary. Their existence depends on each other. In human society too the interests of individuals and classes are interdependent and complementary. Mutual hostility of class interests is indicative not of culture (Sanskriti) but a deformation (Vikriti) of it. It is not human nature but the symptom of an ailment. A single aspect can never be the whole truth. Only by examining every aspect can truth be ascertained. This is the speciality of the integral philosophy which was propounded by Deendayal Upadhyaya. According to him, the philosophy of class conflict will make man only an enemy of others or else a slave.

The individualist thinkers of the West neglect society and the Marxist thinkers ignore the individual. According to them the interest of society and that of the individual are mutually contradictory. But Deendayalji said that if we examine the arrangement in nature, we will know that it is not hatred and hostility, but mutual dependence, harmony and complementing each other which prevailed in nature. Nature’s balance is maintained by the mutually dependent action of ‘give and take’. Happiness of life depends upon establishing oneness with this order of nature. Therefore, according to Bharatiya culture, the basis of social structure is this mutual accord and mutual assistance. It asserts that the development of the individual should keep in view the simultaneous development of other individuals as well as the advancement of society as a whole.

The political and economic thought of Deendayalji is very clear. He upheld an order of society where neither influence nor a lack of Artha or wealth existed. By lack of Artha he meant poverty and rightlessness. By effect of Artha he meant unchecked authority and worship of wealth. Neither poverty nor affluence was desirable for a healthy development of man. Capitalism and communism are both dominated by undue importance of wealth. Wealth was, like State power, according to Deendayalji, only a means and not an end in itself. He was in favour of production to meet basic needs and not in favour of creating needs for the consumption of goods produced.—to be continued…

(Based on radio talk by Shri Nanaji Deshmukh, The then General Secretary of Janata Party, on 25th September, 1977)