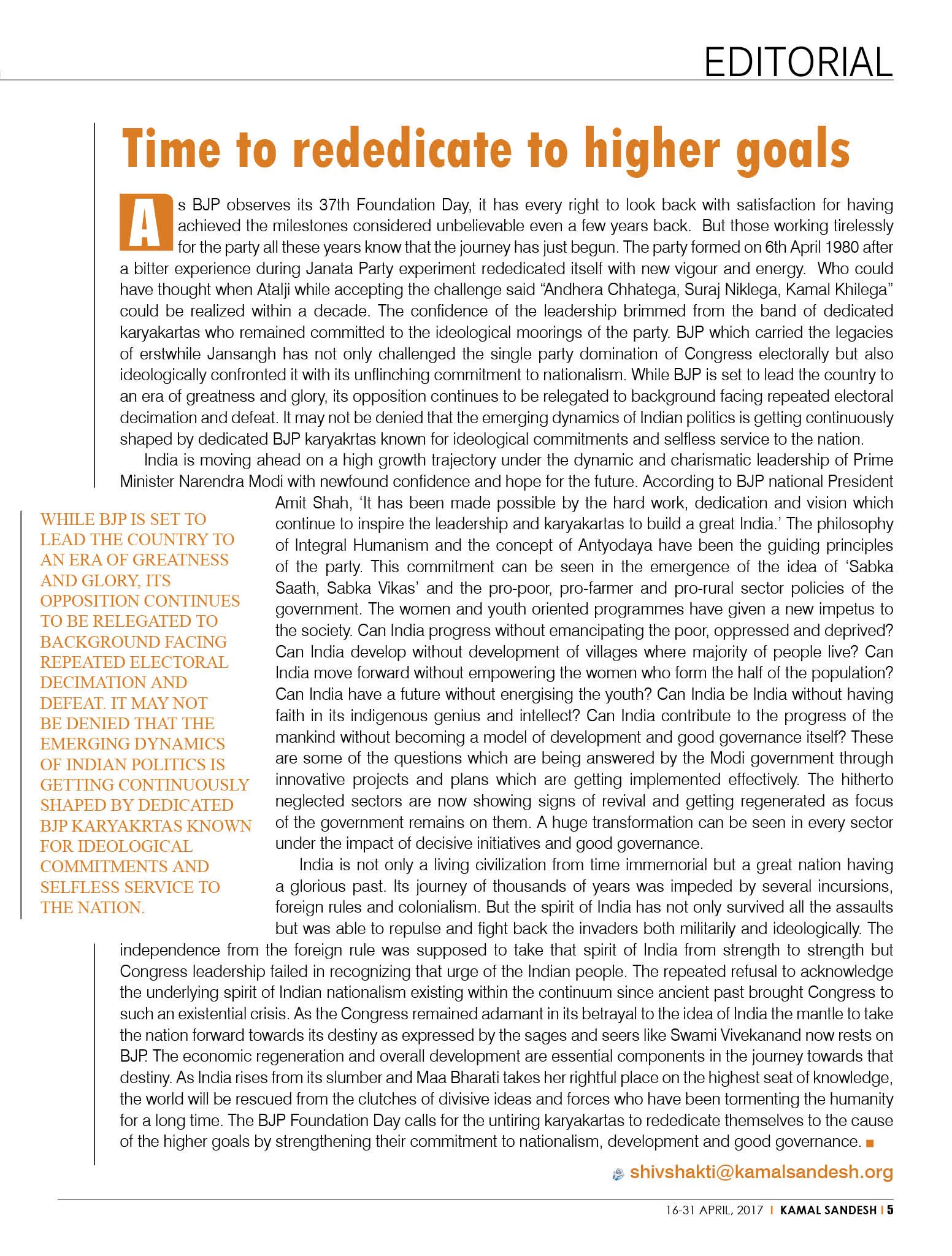 As BJP observes its 37th Foundation Day, it has every right to look back with satisfaction for having achieved the milestones considered unbelievable even a few years back. But those working tirelessly for the party all these years know that the journey has just begun. The party formed on 6th April 1980 after a bitter experience during Janata Party experiment rededicated itself with new vigour and energy. Who could have thought when Atalji while accepting the challenge said “Andhera Chhatega, Suraj Niklega, Kamal Khilega” could be realized within a decade. The confidence of the leadership brimmed from the band of dedicated karyakartas who remained committed to the ideological moorings of the party. BJP which carried the legacies of erstwhile Jansangh has not only challenged the single party domination of Congress electorally but also ideologically confronted it with its unflinching commitment to nationalism. While BJP is set to lead the country to an era of greatness and glory, its opposition continues to be relegated to background facing repeated electoral decimation and defeat. It may not be denied that the emerging dynamics of Indian politics is getting continuously shaped by dedicated BJP karyakrtas known for ideological commitments and selfless service to the nation.

India is moving ahead on a high growth trajectory under the dynamic and charismatic leadership of Prime Minister Narendra Modi with newfound confidence and hope for the future. According to BJP national President Amit Shah, ‘It has been made possible by the hard work, dedication and vision which continue to inspire the leadership and karyakartas to build a great India.’ The philosophy of Integral Humanism and the concept of Antyodaya have been the guiding principles of the party. This commitment can be seen in the emergence of the idea of ‘Sabka Saath, Sabka Vikas’ and the pro-poor, pro-farmer and pro-rural sector policies of the government. The women and youth oriented programmes have given a new impetus to the society. Can India progress without emancipating the poor, oppressed and deprived? Can India develop without development of villages where majority of people live? Can India move forward without empowering the women who form the half of the population? Can India have a future without energising the youth? Can India be India without having faith in its indigenous genius and intellect? Can India contribute to the progress of the mankind without becoming a model of development and good governance itself? These are some of the questions which are being answered by the Modi government through innovative projects and plans which are getting implemented effectively. The hitherto neglected sectors are now showing signs of revival and getting regenerated as focus of the government remains on them. A huge transformation can be seen in every sector under the impact of decisive initiatives and good governance.

India is not only a living civilization from time immemorial but a great nation having a glorious past. Its journey of thousands of years was impeded by several incursions, foreign rules and colonialism. But the spirit of India has not only survived all the assaults but was able to repulse and fight back the invaders both militarily and ideologically. The independence from the foreign rule was supposed to take that spirit of India from strength to strength but Congress leadership failed in recognizing that urge of the Indian people. The repeated refusal to acknowledge the underlying spirit of Indian nationalism existing within the continuum since ancient past brought Congress to such an existential crisis. As the Congress remained adamant in its betrayal to the idea of India the mantle to take the nation forward towards its destiny as expressed by the sages and seers like Swami Vivekanand now rests on BJP. The economic regeneration and overall development are essential components in the journey towards that destiny. As India rises from its slumber and Maa Bharati takes her rightful place on the highest seat of knowledge, the world will be rescued from the clutches of divisive ideas and forces who have been tormenting the humanity for a long time. The BJP Foundation Day calls for the untiring karyakartas to rededicate themselves to the cause of the higher goals by strengthening their commitment to nationalism, development and good governance.