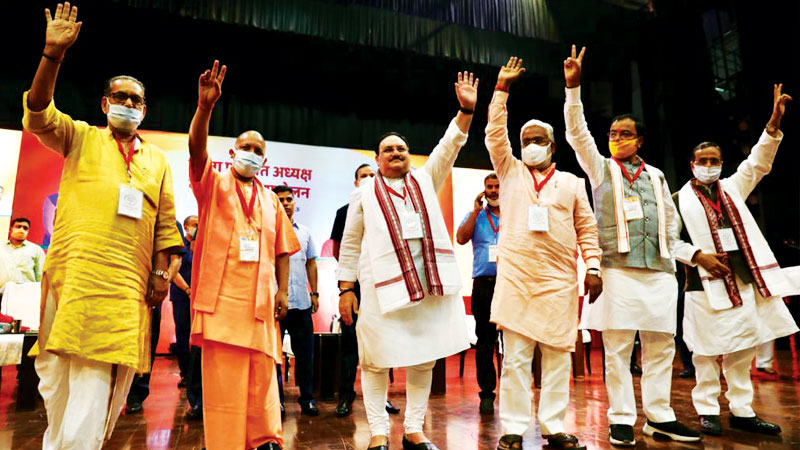 The Bharatiya Janata Party National President Shri Jagat Prakash Nadda was on his two day organizational Pravas in Uttar Pradesh starting from 07 August, 2021. On his arrival in Lucknow, thousands of party Karyakartas accorded a rousing welcome to him.

On the second day (08 August) of his Pravas, the party National President also addressed a ‘Corona Warriors Sammelan’ in Agra where several prominent doctors, medical staff and important personalities participated.

Shri Nadda said we should set our agenda by understanding the problems and issues of the people of various areas and regions.

The BJP National President said under the leadership of PM Shri Narendra Modi the agenda of the Bharatiya Janata Party is to work for the welfare of poor people and strive for the upliftment of villagers, SCs and STs, backwards, deprived, youth and women in the state.

Earlier in Uttar Pradesh there was no rule of law. But that scenario has changed and now there is rule of law everywhere in the state, Shri Nadda added.

The party National President further said that under the leadership of Prime Minister Shri Narendra Modi we are fulfilling our mission of ‘Sabka Saath, Sabka Vikas, Sabka Vishwas’ and Chief Minister Yogi Adityanath is leading the state in a new direction.

“I urge all Zila Panchayat Adhyaksh and Block Pramukhs that you are the custodians of people, it is your responsibility to take care of their interests and welfare. You have to strive to become ‘Pratham Jansewak’ in your districts and blocks,” he added.
Shri Nadda said the Uttar Pradesh Government under the leadership of Chief Minister Yogi Adityanath and the guidance of Prime Minister Shri Narendra Modi has been working for everyone’s development in the state.

On the second day of his Pravas, the BJP National President Shri Jagat Prakash Nadda along with Chief Minister Yogi Adityanath and other senior leaders of Uttar Pradesh took part in a meeting of party Karyakartas and functionaries in Agra.
Later in the evening he addressed a meeting to honour the Corona Warriors, in which prominent doctors of Agra city were present.

Speaking to them Shri Nadda has praised the contribution of the doctors of the country for their service to humanity during COVID 19 pandemic.

He said that by the end of this August month, BJP will prepare Four lakh health volunteers in Two lakh villages who can serve their village as frontline health workers on time if any third wave of the pandemic comes.

He said 22 AIIMS have been sanctioned by the Union government led by PM Shri Narendra Modi. 10 crore 75 lakh families have been benefited by Pradhan Mantri Jan Arogya Yojana in the country.

Speaking on the occasion, Chief Minister Yogi Adityanath said that Uttar Pradesh government has provided all possible help to people during the pandemic period. The UP CM said that the Central government is providing the Covid vaccines free of cost in the country and Uttar Pradesh is among the leading states in terms of COVID 19 tests and Vaccination.