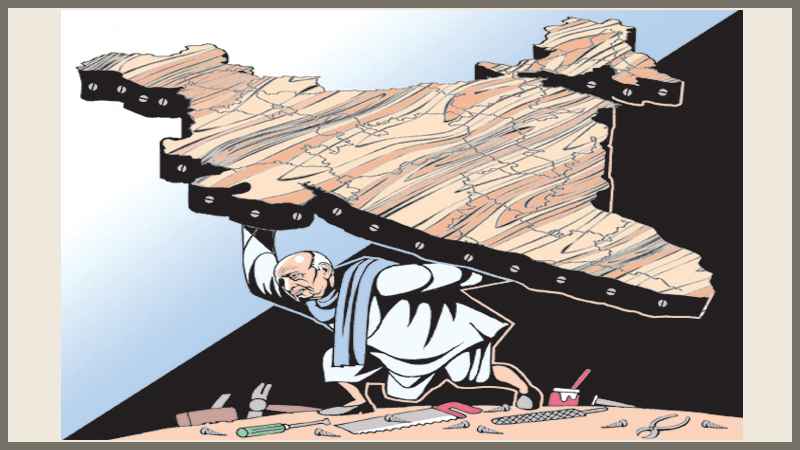 The first half of 1947 was a critical period in India’s history. The end of colonial rule was certain and so was India’s Partition, but what was uncertain was whether there would be more than one division. Prices were rising, food shortages were common but over and above everything else, the unity of India was under severe strain.

It was in these circumstances that the States Department came into being in June 1947. Among the chief aims of this department was to give impetus and top priority to negotiations vis-à-vis India’s relationship with the over 550 princely states, which were as diverse as they could get, be it in size, population, terrain or economic situation. No wonder Mahatma Gandhi remarked, “The problem of the states is so difficult that YOU alone can solve it.”

In vintage Sardar Patel style, he went about his work with precision, firmness and administrative efficiency. Time was less and the task was herculean … but this was no ordinary person, it was Sardar Patel, who was determined not to let his nation down. One by one, he and his team negotiated with the princely states and ensured that they all became a part of free India.

It was due to round-the-clock effort of Sardar Patel that the map of India is what it is today!

Once freedom was won, VP Menon, it is said, wanted to retire from government service, only to be told by Sardar Patel that this was neither the time to rest nor the time to retire. Such was Sardar Patel’s firm resolve. VP Menon was made the Secretary of the States Department. In his book ‘The Story of the Integration of Indian States’, he writes about how Sardar Patel led from the front and inspired the entire team to work assiduously. He also writes that Sardar Patel was clear – first and foremost came the interests of the people of India, there would be no compromise on that.

On August 15, 1947, we celebrated the dawn of a new destiny but the work of nation building was far from complete. As independent India’s first home minister, he set the stage for an administrative framework that continues to serve the nation be it in matters of day to day governance or protecting the interests of the people, particularly the poor and marginalised.

Sardar Patel was a veteran administrator. His own experience in governance, particularly in the 1920s when he served the Ahmedabad municipality, was extremely handy when he worked towards strengthening independent India’s administrative framework. While in Ahmedabad, he did commendable work in furthering cleanliness in the city. He ensured clean and functioning drainage systems across the city. He also focussed on other aspects of urban infrastructure such as roads, electricity and education.

Today, if India is known for a vibrant cooperative sector, a large part of the credit goes to Sardar Patel. The roots of Amul can be traced back to his vision for empowering local communities, particularly women. It was Sardar Patel who also popularised the idea of cooperative housing societies, thus ensuring dignity and shelter for many.

Two traits synonymous with Sardar Patel are trust and integrity. The farmers of India had unparalleled faith in him. After all, he was a kisan putra, who led from the front during the Bardoli satyagraha. The working class saw him as a ray of hope, a leader who would speak up for them. Traders and industrialists preferred to work with Sardar Patel because they felt here was a stalwart who had a vision for India’s economic and industrial growth.

His political peers too trusted him. Acharya Kripalani remarked that whenever they faced an issue and if Bapu’s guidance was not available, they would turn to Sardar Patel. When political negotiations were at their peak in 1947, Sarojini Naidu called him “the man of decision and man of action”. Everyone trusted him, his words and his actions. Sardar Patel continues to be respected across caste, creed, faith, age!

This year’s Sardar Jayanti is even more special. With the blessings of 130 crore Indians, the Statue of Unity is being inaugurated today. Situated on the banks of the Narmada, the ‘Statue of Unity’ is the tallest in the world. ‘Dharti Putra’ Sardar Patel will stand tall in the skies, to guide us and inspire us.

I congratulate all those who have worked day and night to ensure that this grand statue in tribute of Sardar Patel becomes a reality. My mind goes back to October 31, 2013, when we laid the foundation stone for this ambitious project. In record time, a project of such scale has become ready and this should make every Indian proud. I urge you all to visit the Statue of Unity in the times to come.

The Statue of Unity is a symbol of both the unity of hearts and the geographical integrity of our motherland. It is a reminder that divided, we may not be even able to face ourselves. United, we can face the world and scale new heights of growth and glory.

Sardar Patel worked with astonishing speed to dismantle the history of imperialism and create the geography of unity with the spirit of nationalism. He saved India from Balkanisation and integrated even the weakest of limbs into the national framework. Today, we, the 130 crore Indians, are working shoulder to shoulder to build a New India that is strong, prosperous and inclusive. Every decision is being taken to ensure that the fruits of development reach the most vulnerable, without any corruption or favouritism, just as Sardar Patel would have wanted it.

(The writer is the PM of India)