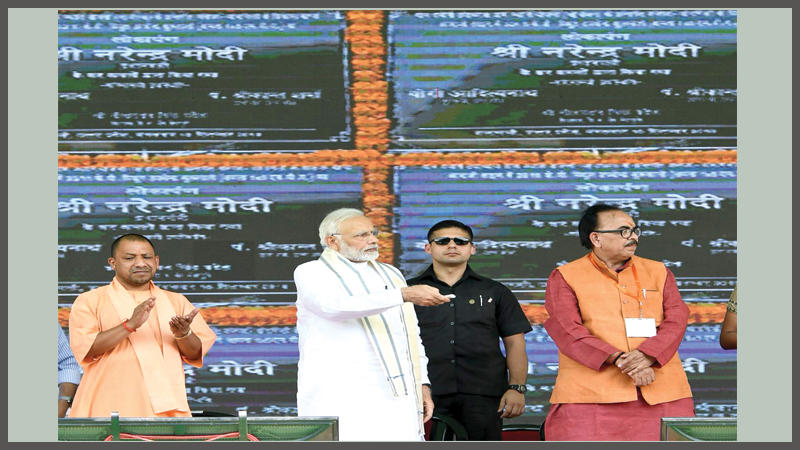 The cumulative value of all projects which were inaugurated, or for which foundation stone was laid today, is over Rs. 550 crore.

Speaking on the occasion, the Prime Minister said that the efforts to bring about change in Varanasi, are also attempting to preserve the city’s rich heritage. He said the city is being modernized, while protecting its ancient identity. He said the change that has been brought about through four years of resolve of the people of Kashi, is now visible.

Shri Narendra Modi referred to the various projects in the power, road and other infrastructure sectors, which have progressed significantly, and brought about an improvement in the lives of the people in the city of Varanasi, and nearby areas. The Prime Minister said he feels very happy when he sees citizens post pictures of Varanasi Cantt Station online. He mentioned the work being done towards modernization of transport infrastructure. He also spoke of the work being done towards cleanliness and enhancing the visual appeal of the city. He said this move, which will transform tourism is a continuing effort. In this context, he also mentioned the work being done in Sarnath.

The Prime Minister said that basic facilities such as roads, electricity and water, are being extended to the rural areas surrounding Varanasi as well. He said Kashi is now emerging as a health hub. Mentioning the Atal Incubation Centre that was inaugurated today, he said that startups are already beginning to get connected with this. He said Varanasi is among the select cities in the country where Piped Cooking Gas is being made available.

The Prime Minister called upon the people of Varanasi to dedicate themselves towards fulfilment of this common resolve for the transformation of the city.