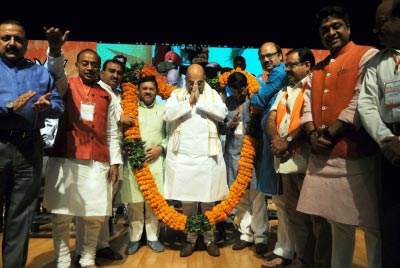 Bharatiya Janata Party National President Shri Amit Shah on May 02, 2017 dubbed the victory of the party in the Delhi civic polls as a stamp of approval for the Modi government, saying it would serve as the foundation for a BJP government in Delhi.

Addressing the BJP’s newly-elected councilors at a ‘Vijay Parv’ function at the Civic Centre in Delhi Shri Amit Shah said, “Our opponents were expecting the winning run of Narendra Modi Ji to come to a halt in Delhi, but due to the hard work and passion of the party workers, a massive victory was secured”.

“Our main target was not the MCD polls. This victory has laid the foundation for the BJP to form the next government in Delhi,” he added.

He said the MCD poll victory of the saffron party had put an end to the atmosphere of negativity and non-performance. It has also finished the anarchy adopted as a strategy by some people to find fault in everything and the practice of offering excuses, despite their mandate to perform”.

Praising the booth-level workers for bringing the voters to the polling booths, Shri Shah said, “Kejriwal alleged that the BJP won because of EVM tampering. If he wants to know the real reason behind this victory, he should meet our booth workers.” Kejriwal had raked up the issue of EVM manipulation in the aftermath of the MCD polls, despite the Election Commissions assertion that the electronic voting machines were robust and tamper-proof.

The BJP President reminded the new BJP councilors of the challenges before them. “The new BJP team in the MCD needs to keep in mind that it is their responsibility to lay the foundation of the next victory in Delhi Assembly polls through their work,” he said.

Praising Prime Minister Shri Narendra Modi, Shri Shah said the MCD poll verdict only reflected the public mood. “People from all the states live in Delhi and the elections here are a referendum on a political party’s performance. Delhi’s mandate is the country’s mandate and the people are with Narendra Modi Ji,” he added.

Highlighting the role of Modi Ji in fashioning the BJPs spectacular victory in the 2014 Lok Sabha election, he exhorted the new councilors to work with dedication to make Delhi a model capital in the world.

“In 2014, people blindly reposed their faith in the BJP and Narendra Modi. They did not impose their expectations on us. Over the last three years, our government has worked for farmers, poor and youth, besides making the Indian economy one of the fastest growing economies in the world, as Shri Narendra Modi had promised when he was selected as the party’s prime ministerial candidate,” he said.

The BJP President also took a dig at former Prime Minister Manmohan Singh. “People did not have any great expectations. They simply wanted a Prime Minister who could speak. They were frustrated with a silent prime minister and wondered why nobody heard him speak on the international foras,” he said.

Giving credit to the people of Delhi for the party’s victory in the civic polls, he said the new councilors will have to work to bring about changes in the lives of slum- dwellers and transform Delhi into a model capital.