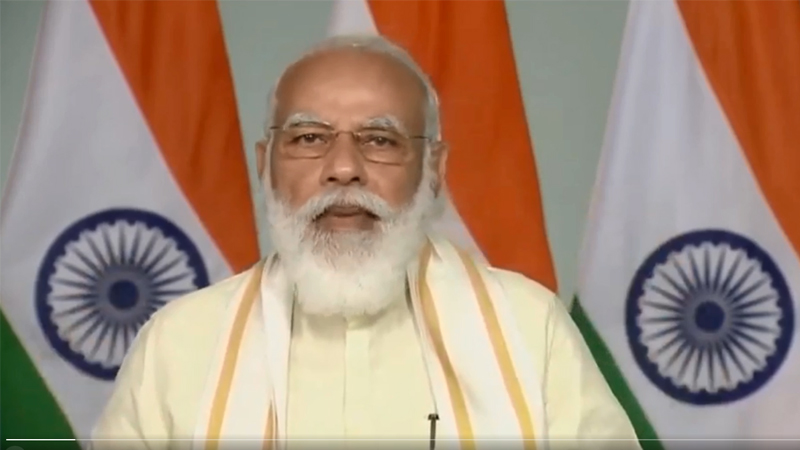 Marking the victory of Goddess Durga over the demon Mahishasura, Durga Puja is the single largest celebration for the people of West Bengal and is deeply hard-wired in the Bengali culture. Amidst the festivities and grandeur of the Durga Puja celebrations, Prime Minister Shri Narendra Modi on October 22 shared his Pujor Shubecha greetings with the people of West Bengal through a virtual address, which was the sixth day or Shashti in the Durga Puja celebrations this year.

Ending his speech in Bengali, he said, I can’t stop myself from speaking in Bengali and apologised for errors. Recalling Swadeshi movement, PM Shri Modi said it was Bengal which turned Swadeshi into an ‘oath’ during freedom movement. “Whenever the need was felt in India’s history, Bengal has always led the way for India and shown the path. There have been many renowned people who have come from Bengal and have contributed immensely in guiding the nation is the right direction,”

PM said. “The festival of Durga Puja is a festival that reflects the unity and strength of India. It is also a reflection of the traditions and culture that comes from Bengal.” He added, “People have shown great restraint in celebrating Durga Puja amid Covid-19 and urged everyone to wear masks and follow social distancing during celebrations. Durga Puja reflects unity and strength of India, as well as traditions and culture of Bengal. West Bengal has to play a significant role in ‘Purvodaya’, Prime Minister added.

He said, “Rs 8,500 crore have been approved for Kolkata’s East West Metro”. Mission to empower women is going on at rapid pace in India, PM Modi added. Women are the symbol of Maa Durga; we are working towards the empowerment of women through various policies and schemes, he said, referring to “Beti Bachao, Beti Padao”.