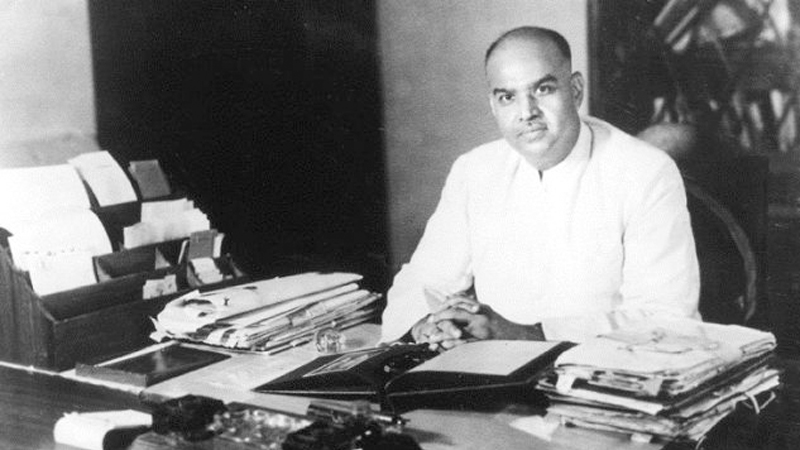 Dr. Syama Prasad Mookerjee in his presidential address at the first Convention of All India Bharatiya Jana Sangh held in Delhi on 21st October, 1951 elaborated on main reasons behind the formation of Bharatiya Janasangh. We are publishing the full text of his speech for our esteemed readers in a series. The second and last part of his speech is given below :

Regarding Kashmir our party feels that the case should be withdrawn from U.N.O. and there should be no further question of plebiscite. Kashmir is an integral part of India and should be treated as any other State. It is indeed tragic that one-third of Kashmir should be in the hands of the enemy and our Government should be unable to free the area from foreign occupation in spite of occasional outbursts of determination to fight any future penetration. From what I have stated above it will appear that our party claims to deal with national and international problems in a spirit of realism consistent with the honour and dignity of India. We have been attacked vigorously by some spokesmen of other parties specially Mr. Nehru, the President of the Congress.

Since he also happens to be the Prime Minister of India his utterances naturally carry great weight. The vigour of his repeated attacks has given us added strength and determination. We will not succumb to threats and abuses. Indeed they have provided us with widespread publicity and for this our thanks are due to him. It is open to anyone to criticize another party’s programme freely and unequivocally but such criticisms should not amount to misrepresentation of facts. The main charge against us is that we are a communal party with retrograde ideas.

A bare examination of our programme will convince any right-thinking man that this is a perversion of truth. The charge of pandering to communalism really lies at the door of the Congress and specially against Mr. Nehru himself. Let him coolly examine his own performances during the last thirty years. At every step when he and his colleagues had to deal with the intransigence of Muslim League, they ran away from the fight and ultimately succumbed to it by dividing their motherland. Dr.Ambedkar’s recent proposal to partition Kashmir on the basis of Hindu and Muslim population has shocked many.

We also do not approve of this. Such concession do not settle disputes but only create fresh jumping grounds for Pakistan for making fresh demands. That was indeed the old Muslim League technique. But surely this was exactly what Mr. Nehru and his friends had done with regard to India in 1947. It is true that some of us supported the partition of Bengal and Punjab in 1947 but be it recorded that we were forced to do so when Bharat s division was imminent.

We always wanted to keep these and other provinces within United Bharat. When we found that this was not possible due to the betrayal of the Congress and the pact between itself and Muslim League supported by an astute British policy, we were anxious to save as much of these provinces as possible and keep them within free India. Otherwise they would have been lost to India in their entirety.

If Bharat had not been partitioned, there would have been no occasion to partition these great provinces whose people have suffered enormously for the sake of Bharat’ s liberation. Having repeatedly sacrified Bharatiya nationalism at the altar of Muslim communalism and even after partition having surrendered to the whims and howls of Pakistan Government it does not lie in the mouth of Mr. Nehru to accuse others of communalism. There is no communalism in Bharat today except the new policy of Muslim appeasement which has been started by Mr. Nehru and his friends for the purpose of winning their votes at the forthcoming election.

We have provincialism and other types of class or caste differences in the country today. Let us jointly try to remove these evils so as to lay the foundation for a truly democratic India. The cry of communalism raised by Mr. Nehru is to sidetrack the real issues now before the country. The problem before the country today are clearly related to hunger, to poverty, to exploitation, to maladministration, to corruption, to abject surrender to Pakistan, all being evils for which the main responsibility rests on the Congress and the Government under it. Mr. Nehru, the Arch-Fascist of India, accuses others of fascism. Such efforts to hoodwink the public will meet with miserable failure.

We firmly believe that the inauguration of this party will usher in a new era of hope, peace and strength. Our goal and objective are sound but our success will depend on the organisation that we can set up and the confidence that we can create in the minds of the people themselves. That will take time and much patient labour. Let its not be completely overshadowed by the forthcoming elections. No doubt we will face them boldly and appeal to the electorate wherever we can to turst us with their votes explaining the viewpoints that we are claiming to advocate.

There is however greater chance of defeating the Congress at the elections if there is at least electoral understanding among the principal parties in opposition. The main basis for such understanding should be popularity and confidence of the voters. The Congress has collected enormous funds and all sorts of pressures are being put upon various classes of people for getting their support for the Congress. It enjoys the powers of Government today and there is every likelihood that it will not hesitate to manipulate the official machinery for winning the elections. From our recent experience in Delhi elections it is feared that elections may not be free and fair.

The manner in which the official machinery was utilised for the Delhi session of the Congress also indicates how Congress and Government have become synonymous expressions. Such abuse of power creates most unhealthy precedents. All opposition parties should, therefore, unite in demanding that the conditions for free and fair election should be scrupulously observed. Even Delhi elections, where the Congress has won, reveal interesting conclusions. Of the total voters barely 30 per cent have voted for the Congress.

Thus the majority of the voters are anti-Congress. This has been the case in the capital city of Bharat in spite of feverish and hectic efforts of the Prime Minister and others to win success for the Congress. But for the fact that the contestants were too many in number and in some places Congress gave tickets to non-Congress independents, the majority of the votes would have been cast against the Congress and the Congress would have been ultimately defeated. In any case our party, although barely two months old, has secured about 24 per cent of the total votes and in many cases the difference between the Congress candidates and ours was very small. This is no small achievement. Our workers must march ahead in full confidence of the justice of our cause and the support which we have already received in different parts of the country.

We enter upon our task with full faith, hope and courage. Let our workers constantly remember that only through service and sacrifice will they be able to win the confidence of masses of the people. The great task of revitalising and reconstructing free Bharat awaits us. The mother calls her children, irrespective of class, caste or religion to come to her and serve her. However dark the present clouds may be, Bharat has a great destiny to fulfil in the years to come. May our party whose symbol in the forthcoming elections is a humble earthen ‘Pradip’ try to carry this light of hope and unity, faith and courage to dispel the darkness that surrounds the country.
The journey has just begun.May Providence endow us with strength and fortitude to remain ever on the right path, not cowed by fears or tempted by favours, and to help to make Bharat great and strong, spiritually and materially, so that she may become a fit and noble instrument in the preservation of world peace and prosperity. Jai Bharat!.