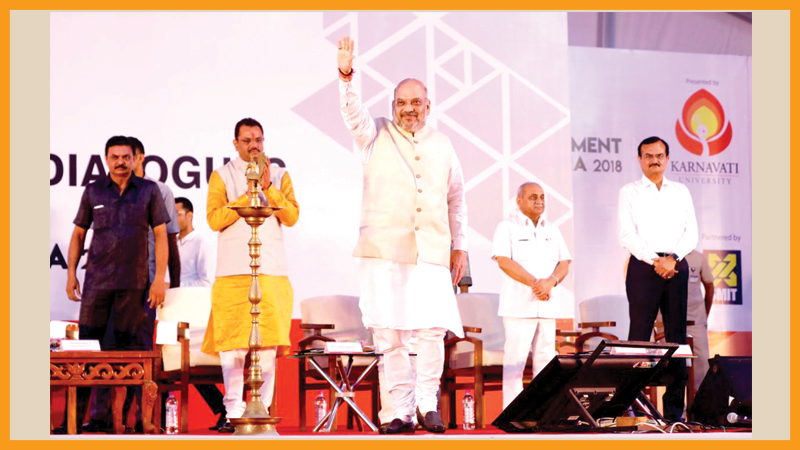 BJP National President Shri Amit Shah on 14 July, 2018 opened the two-day ‘Youth Parliament’ in Gujarat’s capital Gandhinagar and urged the youth of the country to contribute in the nation building. Addressing the gathering at the ‘Youth Parliament’ organised in the Karnavati University in Gandhinagar, Gujarat Shri Amit Shah criticizing the Congress and the Gandhi-Nehru family said that a party which failed in establishing internal democracy can never preserve India’s democracy.

Before the Bharatiya Janata Party came to power under the leadership of Prime Minister Shri Narendra Modi in 2014, India was lagging behind other countries in most key areas such as economic growth, agriculture and on social sector indicators, he said. However in the past four years, things have improved considerably, Shri Shah said,

“Before 2014, a particular party remained in power for the maximum period after Independence. But the way these governments functioned, a large part of population remained deprived of development. “These people had a feeling that independence brought no benefit for them,” he said. Shri Shah then highlighted the achievements of the BJP-led government at the Centre.

“After assuming office (in May 2014), the first task Modiji took up was to uplift 50 crore people. In these four years, he brought 30 crore citizens in the formal economy by opening their bank accounts. More than 4.5 crore women were given LPG connections, while 7.5 crore toilets were built during that period,” Shri Shah said.

Continuing his attack on the Congress, the BJP President said though many people sacrificed their lives during the freedom struggle, attempts were made to give credit for Independence to one party or a particular family. The party which came to power immediately after Independence has abolished internal democracy in the party. It has become family-centric. A party which has failed to preserve its own internal democratic structure, can never preserve the country’s democracy, Shri Shah said.
“If we want to preserve democracy in our country, we must establish internal democracy in politics. Since that did not happen in the past, our country could not achieve desired results post independence,” the BJP President said.

He further said the Indian Space Research Organisation (ISRO) realized its full potential after the Modi government came to power. This was reflected in the ISRO sending a record number of satellites in space in one go in early 2017, he added.
Commenting on the surgical strikes across the LoC in Pakistan-occupied Kashmir, the BJP President said Modiji’s go-ahead to the armed forces for the 2016 raid put India in the league of nations such as the US and Israel, which are known to avenge the killing of their soldiers.

Shri Amit Shah urged the youth to join PM Modi’s mission to build a New India by 2022. He said the New India will be a society free of casteism, poverty, community divisions, dynastic political system, corruption and politics of appeasement.

Let’s take a pledge to build a New India as envisaged by Modiji, who is the most charismatic and popular leader in the world. We all are lucky to have him at the helm of affairs in the country,” Shri Amit Shah added.